What I want to be reincarnated as…

I spent a lot of time on safari considering which animal in the bush I would most want to be.

The obvious choice is a lion. You get to sleep 16-20 hours a day, the rest of the bush is terrified of you, and you basically get to eat whatever is unlucky enough to wander across your path. 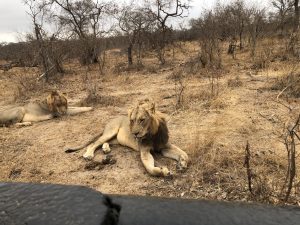 But as we all know, I’ve never been one to choose the easy route…

(Side note: I deliberately took this picture to show the side of the Jeep because we were THIS CLOSE. DP was afraid I would start to giggle in the way I do when I’m nervous. So was I, but the fact that I could have legitimately gotten eaten scared me enough to keep it together. I couldn’t even look him in the eye, he was so intimidating – apparently DP blinked at him just like we do with our cats). 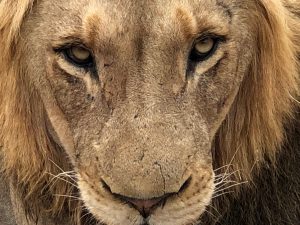 Given my laugh, a hyena would also be an obvious choice. They will steal the kill from a pack of lions and then straight up laugh at them. Lions kill them sometimes, ostensibly because they’re competitors, but let’s be real…it’s also because they hate getting laughed at. 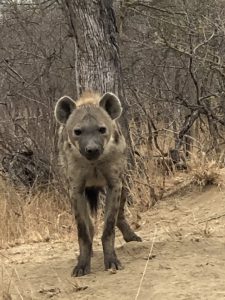 But look at their eyes – they’re completely black, like demons. Plus, they’re complete opportunists: taking kills from other predators, taking over dens from warthogs (and eating the warthogs in the process). I’m sure the hyenas don’t care, but I don’t want that as my reputation.

Baboons would be a good choice – if not a very imaginative one. They’re so human-like already.

No one would want to be an impala. They’re so pretty, but the guides have nicknamed them “McDonalds” and not just because they have a perfect M on their butts. 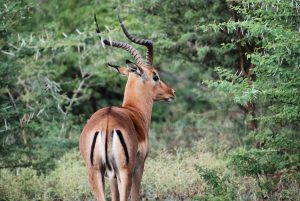 Photo credit: @seanlauer (we didn’t have a good photo)

Our guide Edward really loves the elephants because they’re so social and intelligent. He told us they have sensors in their feet to hear the foot stomps and low-frequency rumblings of elephant family members miles away, alerting them to danger. 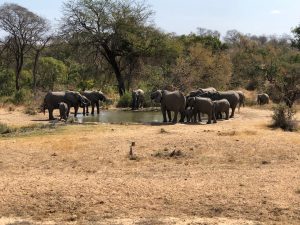 DP’s favorite was the kudu. They are known as the “guardians of the bush” because they make noises only when there is a predator nearby and they are never, ever wrong. 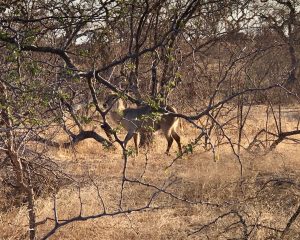 My superficial choice would be a giraffe: they’re tall, slender, graceful and have amazing eyelashes. They’re also beautiful – their markings are so much more intricate and varied than you see on printed fabric. And they literally intertwine their necks to show affection. 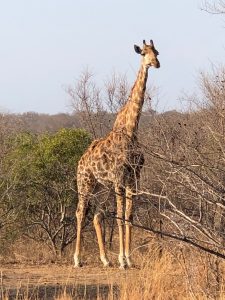 But the leopards are the most stunning: 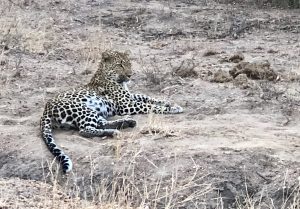 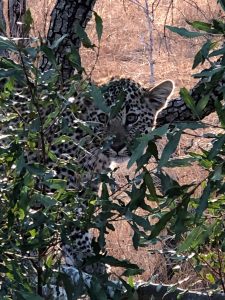 It amazes me how every species’ camouflage evolved so differently, yet it all works. It has to. Every twitch of the ears and every scent on the breeze is an alert to danger or the possibility of food. Most everything in the bush dies a violent death. Survival is all that matters.

Never did I think that I could learn so much about human nature by looking at animals. Our need to feel secure, to fulfill our needs, to protect our children – we watched how it plays out, every single second, every single day.

BUT WE ARE NOT ANIMALS, at least in the traditional sense. We have harnessed the power of fire, wheels, language, jet propulsion, and cellular biology. To do what? Care about the last 5 pounds, the minutiae of cable news, and showing off our wealth? No. We have the opportunity to do much, much more.

So much of what we obsess and worry over, the things we argue about, the things we buy DO NOT MATTER. Honestly, it was a great break from humanity too.

It was refreshing to be reminded that once our survival needs are met — personal security, shelter, food, health, the world is open to how we want to spend our time on this earth. We are lucky, even those of us with terminal diseases.

Turns out, I want be reincarnated into in the next life as an anti-poaching helicopter pilot. But that’s a story for tomorrow’s blog.