“Don’t cry because it’s over, smile because it happened.”

…said the note on our bed this morning when we came back from our last game drive this morning, the one in which we saw the highly endangered white rhino and the only Nile crocodile in the whole reserve.

We didn’t just “see” the rhino; we spent over a half an hour with him as he drank, ate grass, and scratched his horn on a dried up stump of a bush. Exactly what he should be doing as an elderly rhino, approximately 40 years old out of 45-50. 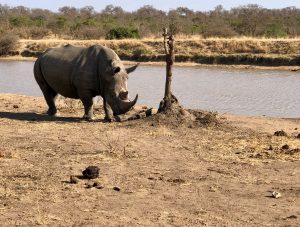 All the while, a helicopter swung in a wide circle around us, close enough to keep an eye on where he was but not so close as to alert poachers to his location. I noticed our guide and tracker watching our surroundings for poachers too – it’s probably the most vulnerable we ever were on safari, ironically.

Our guide said that in 4 or 5 years, the white rhino will likely be gone from the reserve and Kruger National Park because of the poaching. One was killed on Sunday and a gunshot was heard yesterday. This is why the guides are no longer allowed to share info with each other on the radio when they spot one, as they do with leopards, lions, and the African wild dogs (which are also highly endangered, only 480 left in all of South Africa). 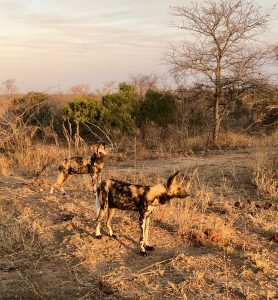 The reserve is about to start 24/7 patrols around the black rhino, which is even scarcer than the white rhino. There are only two left in the 54 square miles of the Thornybush Game Reserve. One was killed about 2 months ago in the reserve – they think it was an inside job.

Conservation groups have even started performing surgery to de-horn the animals to try to deter the poaching, but it hasn’t worked well because eventually the horns grow back and they’re killed for even a small horn.

It’s gotten so bad that recently, poachers stormed a rhino orphanage and killed all the staff and the rhinos.

Why? Because some people in the Middle East and Asia consider it a sign of wealth. The poachers only want the horn, they leave the rest of the animal.

I don’t even know what the point of recounting this is, only that it’s a shame and it makes me furious. I can’t smile about any of it, but I do feel extremely privileged to have been one of the last on Earth to see one. 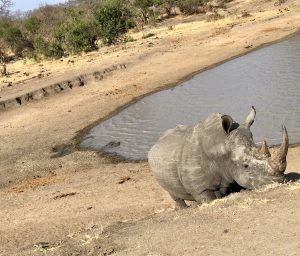