Too much for one race report. Catch up here. 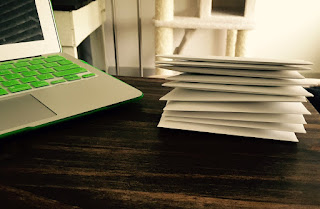 Well, one similarity between Shy Tuna and I is that we both spend an inordinate amount of time at the post office. He mails tie dye shirts, I mail care packages to all the Team Drea members before their races. This year, I got smart and bought gifts that fit in envelopes, but I always seem to be mailing them last minute so I’m still always running to the post office…unless I can sucker my dad into taking them for me 😉

So, like I was saying, I was feeling pretty confident the week before Ramblin’ Rose Raleigh. The race director Amy and I met to catch up and discuss logistics. She was totally agreeable to letting Julie & I swim first, before the race started. This had a couple of advantages: 1) I wouldn’t be keeping everyone for an extra hour like RR Chapel Hill, 2) it would be safer/easier for me to swim in the same lane along the side instead of “snaking” through the pool and potentially holding someone up.

I came back from that meeting feeling totally energized. I decided to dump in a load of laundry using the new rolling laundry cart DP bought. As I whipped the cart around…WHAM!! The cart kept going and I went straight, landing mostly on my face and left shoulder. I tasted blood.

I managed to get myself up, inspect the gash in my lip and call my dad (Reason #4578 why it’s nice they’re 3 miles away) since DP was at the gym. I ended up with stitches inside my lip and had to eat smoothies, soup, and ice cream for 3 days (somehow my lip magically healed itself enough for me to down a Char-Grill cheeseburger though…)

I wasn’t immediately worried about my shoulder. It was a little swollen and bruised, but I figured a regimen of ice packs, advil, and muscle rub would take care of it. But when it was still painful days later, we went to urgent care for x-rays just to make sure no bones were chipped or fractured — especially since this post was going out.

I didn’t handcycle or swim at all that week, which made me anxious. So the day before the race, my mom and I went to the pool to test my shoulder. Instead of pushing for speed, I did two slow laps, careful not to tweak it. It hurt a little, but was tolerable. The best part was that my heart rate didn’t spike so I didn’t get the panicky feeling I usually get when I start swimming. Could my shoulder injury really have solved my swim anxiety?? Now that would be ironic… I finished my 250yds smiling.

Then things got busy. My college roommate Elizabeth arrived from Charleston, SC. Carissa & Shawn drove in from Columbus, OH. We went to packet pickup and saw a bunch of other Team Drea members that were racing. We had a low key party at our apartment. I finally got to spend time with Fran and Donna of Tri It For Life, and they brought awesome swag (it seemed everyone brought goodies…Elizabeth made me an INCREDIBLE scrapbook from all of her TBTs last year).

So it wasn’t until about 9pm when we went out to our cars to rearrange and load the bikes…and noticed THE TRIKE HAD A FLAT!! Did I have a spare tube? Of course not. Why? Because I’m an idiot. Seriously, such a rookie move…

After 30 minutes of pushing, pulling, and YouTube, the tube was off and Carissa and I sent the boys were off to look for a 20″ (BMX size) tube. They found a patch kit at Target and the right size box at Walmart with the wrong size tube in it. I’m so grateful Shawn was there. I’m sure DP could have figured it out on his own…buuuut let’s just say Shawn provided a calming presence during what otherwise would have become a stressful marital situation 😉

While they were working, I made peace with the possibility that it might not work. It’s okay, I’m okay, this will be okay, no matter what. You did the training, that’s what matters. By 11pm, the tire was back on with the original tube, patched and reinforced with bacon-printed duct tape. Because bacon makes EVERYTHING better 🙂 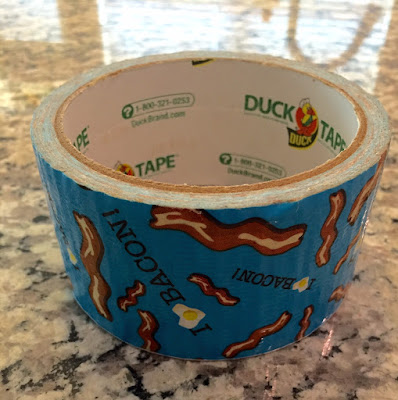 Too soon, we were up and out of the house. It was a chilly 50 degrees for trisuits and swimsuits. I wanted to get there early, since I needed a transition spot as big as a house and we needed to negotiate space for Julie too, plus we were swimming first. It turns out I didn’t need to worry…every one of the race organizers came by to introduce themselves and offer whatever assistance we needed. Can we set up by that tree? Sure. Can I trike from the pool to the transition area? Of course.

Still, it was kind of hectic. There was the usual pre-triathlon chaos — e.g. lines for body marking and internal conflicts of do I need to pee again? — plus lots of people coming by to say hello and wish us luck. I wanted to chat, but needed to concentrate. I’d never quite set up a transition area like this...trike? coming with me. so helmet too, but not clip shoes. and sandals. plus all the usual swimming gear. walker? no, wait, yes.  My head was going in a million directions. And I was shivering.

As I started down the ladder into the pool, I resolved that this would be my last triathlon. It all felt like too much — too many wacky logistics, too many accommodations being made on my behalf. Just too much.

As soon as my head plunged into the water, the world was instantly silent. Mercifully silent. Oh yeah. This is why I do this. That is THE moment I will remember about this race. The silence of leaving behind my trike, my walker, and everything else that I have to rely on to get around on land. I was weightless. Swimming on my own. It was glorious.

So yeah, my swim was great, despite my nose plugs coming out a couple of times. I came up sputtering and that scared everyone watching….oops 🙂

As Julie, DP and I walked around the side of the building towards transition, a huge cheer went up. It was the entire rest of the race clustered outside waiting to be called in for the swim. Jen from Endurance was on the mic. It was so incredibly touching. I waved. Everyone cheered again.

Carissa told me later that a woman standing next to her said she was nervous about the swim, but after watching me come out of the pool she said, “if she can do it, I figured I could do it too.” Yes, I’ll take it. Anything positive coming out of ALS is alright by me.

Transition was fine, thanks to DP, and Julie and I got out on the road to let the whole race pass us 😉 The Raleigh course goes through some pretty hilly neighborhoods, but thanks to the pre-race ride Julie, Elizabeth and I did a couple of weeks before, I knew it was doable…assuming the bacon duct tape held, right?

The trike and the handcycle were just plain enjoyable. It warmed up into a beautiful, sunny day. So many people said kind things and wished us luck, which we returned in smiles, thumbs up and “you too!”s. This was ALS awareness of a different sort, one I knew Shy Tuna would appreciate.  Connecting with people, sharing in joy, and living life doing what makes you happy….anyway, regardless. My own love ministry.

In 2014, it took me 1:32 to walk the run with trekking poles. With the handcycle — 32 minutes! We cruised in with all the other competitors, which felt great. Just another participant out there doing her thing. I wasn’t looking to recreate the magic of that finish line anyhow. I want to preserve that memory just as it was. 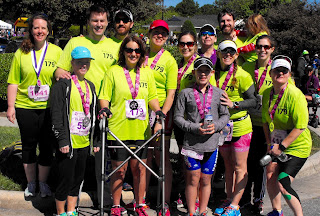 I loved celebrating with everyone from Team Drea — of the ten of us competing, five were first-timers. One was pregnant, three learned how to swim just for this race.

This is really what I love about Team Drea — friends getting out of their comfort zone, try(i)ing something new, raising awareness and money for research, all because of ALS. Yes, I’ll take it. Anything positive coming out of ALS is alright by me. 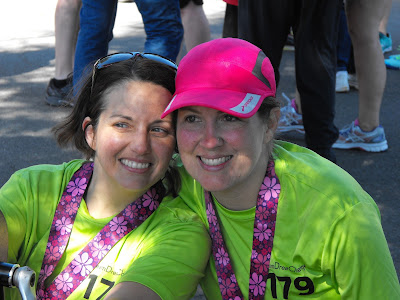 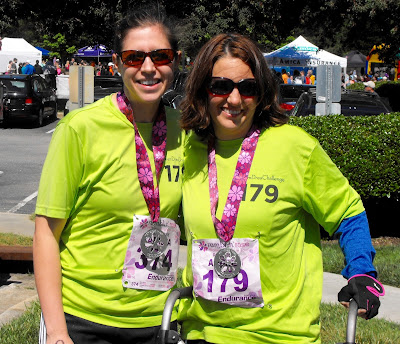 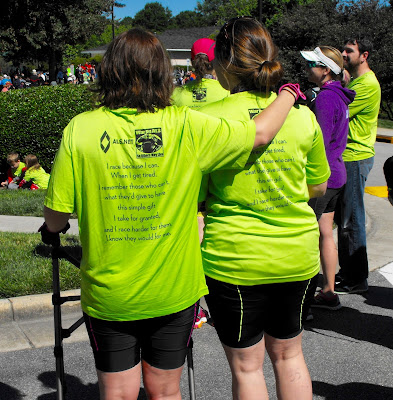 Love everything about this!! Still laughing at the bacon duct tape :D. Congratulations on another finish!!