Last September, when I told my friends in Atlanta that I was coming to visit and meet up with a man from the internet named Shy Tuna at a Cracker Barrel off I-20, they were a little alarmed.

I tried to explain, “See, his name is Mickey, but he runs something called ‘Shy Dye’s Love Ministry’ where he sends tie dye shirts to people with ALS, just to make them happy.” That didn’t really help.
But in the ALS community, Shy Tuna is famous. He has sent 450 shirts to people with ALS around the world. Why? Because he found that tie dye shirts make people smile…and, arguably, who needs a reason to smile more than someone with ALS? 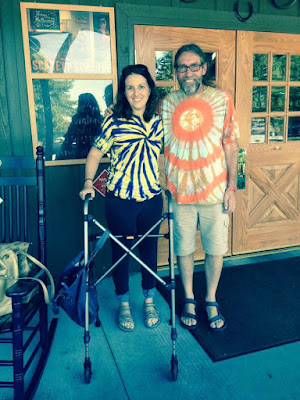 It would be a noble endeavor for anyone, but Shy himself has ALS. He was diagnosed in 2011 at age 50.  Despite bulbar onset, he was still able to eat and feed himself (even smoke!) when I met him and his wife Debbie for our meal at Cracker Barrel. That’s pretty miraculous. Although his hands have weakened, he walks without assistance. The most noticeable symptom is his gravelly voice.

Shy wrote a guest post on my friend Royce’s blog so I encourage you to read his story in his own words. Also, here is a flipagram of people with ALS sporting their shy dye. It saddens me to see so many who are no longer with us, even though the video is just a year old.

Shy’s path crossed mine at a critical time. In February 2015, DP and I went off on our crazy adventure in Turks & Caicos. By that trip, the shock of my ALS diagnosis had worn off, the excitement of the Chapel Hill triathlon had faded, and I was finally ready to dive in and divine much as I could about my journey ahead. I wanted to learn what to expect and — more importantly — how people lived once they knew they were going to die soon and with the knowledge they would lose every single ability and function until they were locked inside themselves. How did they find the courage to face living through every single day?

I read several ALS memoirs that vacation and one of the things that struck me was how the authors were able to pivot to use their careers, skills, and passions in a new, ALS-focused way. Jenifer Estess, for example, used her experience and connections in the theatre world to launch Project ALS and hold several celebrity fundraising events on her foundation’s way to raising $17 million for ALS.

The other takeaway was that ALS memoirs are sad. The books I read tracked the disease to its inevitable, depressing conclusion — their loved ones writing the last chapter(s) when they could no longer type, recounting the grief of their passing in the epilogue as they struggle to go on and carry on the person’s legacy.

I kept thinking about Shy Tuna’s tie dye shirt that had arrived in the mail just before we left. How had he managed to rise above his own grief and fear to find a new purpose and happiness? 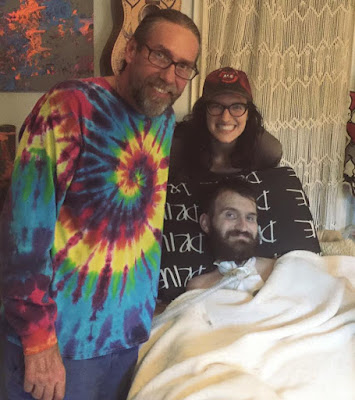 His deep faith is certainly a driving force. It is a ministry of love after all — he prays for and with his ALS brothers and sisters as he sends the shirts and posts their pictures. He hates the disease, but he loves the people more. He loves spreading joy more. Heck, he even loves music festivals more. And so he doesn’t waste time on sorrow or self-pity, or it seems, on his own ALS.

That is the type of story I wanted to be reading. Less about the sad (highly predictable) ending, but how the person chose to live before the disease took over. The lessons they learned about themselves and about life which gave them the strength to face the difficulties of ALS with peace and grace.

Staring out at the blue Caribbean as the waves rolled in, I thought, yeah, I could write a book about that.

My Ramblin’ Rose Race Report, finally! I bet you can guess how the lessons from Shy Tuna apply to triathlon for me… 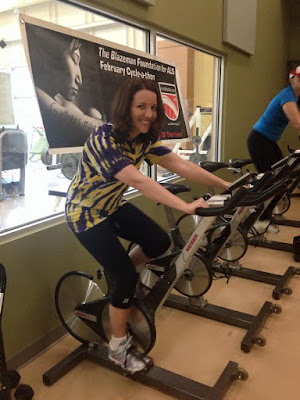 How nice Andrea. You write so well. Hope you make it back to Atlanta soon. Love you.
Peace,
Shy Tuna

Thank you for sharing such a great story. I definitely had my house I Tina has not led us to find him. I learned a lot from your blog. Thank you

Thank you for sharing such a great story. I definitely had my house I Tina has not led us to find him. I learned a lot from your blog. Thank you

He sounds like an amazing guy!! What a gift to the world :). And PLEASE write this book. It will be amazing!! 🙂

You are so gifted with words and telling your story, and the stories of others. Thanks for sharing. I love the tye die, SO happy!

[…] after we returned from Turks & Caicos, Shy Tuna and the idea of writing a book about courageous people with ALS kept swishing around in my mind. A […]