There is just too much to say about Ramblin’ Rose Raleigh so here’s the first of my posts about it. The backstory about how I “re-became” a triathlete.

On the road again…

The reason Ramblin’ Rose Chapel Hill 2014 took me (and, by extension, Julie) so long was because of the “run” which was really an aaaaaaagonizingly slow walk using trekking poles. I’d planned to use the walker in 2015 but (un)fortunately the triathlon turned into our spontaneously planned dri-athlon because of a pesky hurricane.

A week later, I had an aha moment — or really a duh moment — when DP and I spectated IM Louisville and we saw at least two athletes using handcycles and racing wheelchairs. Why hadn’t I looked into an alternative for the run??

So a quick mini-primer. This is a handcycle — three wheels, gears. The rider propels himself by cranking his arms in a circle:

A handcycle is different from a racing wheelchair, where the rider pushes the rims of the chair (no gears):

In Ironman races and paratriathlons, a handcycle is for the bike portion and a racing wheelchair is used for the run. Thanks to work by Kyle Bryant and others, Ironman also recently created a “PC Open” category that allow trikes (like mine) instead of handcycles for the bike.

But handcycles have also made their way into marathons — there’s some controversy here (gears v. no gears) and now the New York and Boston Marathons have two separate divisions. 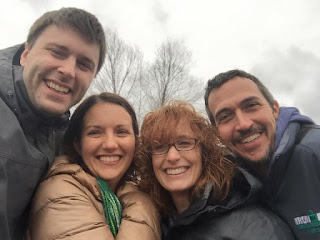 So after Louisville, the idea of a handcycle/wheelchair wheedled its way into my brain and wouldn’t leave. Especially when the magnificent Coach Carrie McCoy of JustTri offered to give me a handcycle that her mom wasn’t using anymore. Two of her awesome athletes (& Team Drea members), Kelly and David, drove through a snowstorm from Columbus to a random Cracker Barrel outside Pittsburgh to deliver it to DP and me.

Now that the move is done, it’s warmer out (& finally stopped raining), and we’re close to a bunch of flat trails, I started trying it out ahead of Ramblin’ Rose Raleigh…holee molee!! It’s hard. I like the challenge, but what I really like is that I can even attempt the challenge. What other people with ALS would give to have the arm strength to lift a fork or a child is never far from my mind. I’m not better than them, I’m not doing something special, it’s just the luck of my progression and where I am on the journey with the disease. But I sure as hell won’t waste the opportunity.

Before I got Carrie’s handcycle, I’d applied for a grant for a new one from the Challenged Athletes Foundation. My rationale was I could get something customized to my size, needs and goals, but I figured it was a long shot anyway due to the nature of ALS and the fact that I am a beginner…BUT I GOT IT!!!!! Thank you CAF!!!!!

The new one is just like the top photo — a Top End Force 3. It came a few days before Ramblin’ Rose Raleigh so I didn’t feel comfortable using it in the race, but I’m sooooo excited to start training on it!!
Try(i)ing again
When the Ramblin’ Rose triathlon registration opened last December, I signed up for Raleigh. I was over being surprised when tri season rolls around and realizing I still could do it if I really stepped up my training. That is ALS running my life, not the other way around.So with help from Ashley (and Starbucks) I’ve been swimming once a month since January at VIDA. Since moving to NC, I’ve been swimming 3-4 times a week at Lifetime with one of my parents, DP, or a friend swimming or water walking nearby, just in case I succumb to one of my self-psyching-out panic attacks. They still happen occasionally, and I still have to stop to rest sometimes, but I generally feel stronger now than I have in a LONG time.

The sure sign I love swimming? At the end of every single workout, I want to jump right back in and try again. I scan the pool and think this is really all mine, I can come back tomorrow if I want. In contrast to handcycling, where all I think is damn, this is a lot harder than running…

So when May came, I was feeling pretty confident. Which is of course when it all (almost) fell apart.

Next time, on Serial the blog…

But before I get to that, I want to introduce you to the man I dedicated my race to — the one and only Shy Tuna!

So cool!! Can't wait to hear the rest of the story and learn more about "Shy Tuna." 🙂 You're AWESOME!!!