May 13, 2016
Uncategorized
1 Comment
My goal this year is to do 12 races in honor of people with ALS who have inspired me. Originally the goal was 12 marathons but I’ve had trouble finding enough that will accept my trike. So now it’s 12 races – marathons, half marathons, triathlons, basically anything that will earn a medal that I can send to the person as a thank you.
In general, I want to highlight people who are still living because I want to showbelieve that there’s still life beyond an ALS diagnosis. It’s a death sentence, yes, but it includes a stay of execution. It’s what people do with that time that I’m intensely interested in, for obvious reasons. 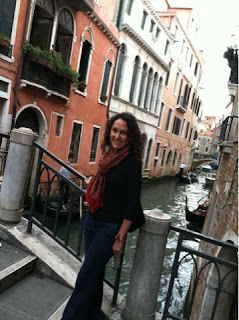 But my journey wouldn’t be what it is today without the lessons I’ve learned from a couple of key people who have now passed away. Jon Blais, of course, and my friend Lisa McMillen. Today is Lisa (and her twin sister, Kat’s) birthday so it seemed like the right day to post the race report I wrote after my race dedicated to her – the Shamrock Yuengling Marathon in Virginia Beach.
——-
I forget sometimes that Lisa and I only met twice and exchanged a handful of texts and emails before she died two days after her 32nd birthday. She feels like a close friend because I’ve had so many deep conversations in the past year with her at the center — mostly with her mom, Angela, and her twin sister, Kat. And also because I’m wearing her clothes. More on that later…
Lisa made her mother promise to take care of me after her death. Unbeknownst to me, they talked at length about how Angela would pass along the piles of gadgets and electronic equipment they had accumulated to make life easier and more comfortable for Lisa as she drifted towards total paralysis and became increasingly unable to speak or swallow. So I was more than a little taken aback when Angela called me on the day Lisa died to tell me that they wanted to give me an automatic door opener and a wheelchair-accessible van — but that’s Angela, Lisa, and Kat for you. They’d developed their own master plan and Lisa’s death just signaled it was time to execute the next phase.
Within a week, Angela and Kat had filled a closet in our basement with dozens of things I’d never even contemplated — a bracket to keep blankets slightly elevated in bed and not crowding your feet, for example. After Lisa’s memorial service (intricately planned with her input, right down to the lavender suit her mom was wearing), Angela and I began a Tuesday ritual of lunch and doing whatever I needed to keep ahead of ALS. One week we were refitting Lisa’s Gucci eyeglasses with my prescription (because at some point, I won’t be able to put in contacts), the next, I was sitting in a chair in the front yard, sketching the facade of our house as Angela called out measurements to see if Lisa’s platform lift could fit next to our front steps without invading the driveway.
Is that weird? I can hear you asking. Here this woman has just lost her daughter and now she’s descended upon me, taking charge of my care, as she did with Lisa. Was I some kind of replacement for Lisa?
No. We talked about this a lot actually, in the early days of our friendship. She had a lot of knowledge as she had been the primary caregiver for her daughter for almost two years. I needed help and a push to take on the frustrating/confusing/scary chores related to insurance, house renovations, ordering equipment, etc. while I still had time and ability.
But it was more than that. Angela shared stories about Lisa, how they’d become closer than ever during her illness, what she missed about her and what she loved. I could talk openly about my fears, sadness, and what I still wanted to accomplish. We were working through our grief in a way that felt productive, which suited both of us. When I could tell she and Kat were stalling about going through Lisa’s clothes, I suggested that the three of us do it together. What could have been an excruciating unearthing of memories was actually a fun afternoon — we all tried on Lisa’s shoes, coats, and dresses while they regaled me with stories of where she bought what, wore what, and which boots she insisted on wearing in her powerchair even though they took forever to put on. Lisa was omnipresent because Angela and Kat could quote what she said, word for word. Only when Lisa’s wedding dress came out did we fall silent. There was just nothing to say to make that okay.

I thought I would feel weird about wearing a dead girl’s clothes, but it turns out that they bring me joy (and not just because Lisa has far better taste than me). It’s as if she’s with me, going on new adventures, living on in visual reminders to be brave and strong, like her.

The rest of Lisa’s hilarious, raucous Italian-Irish family has also embraced DP and me. I scarcely dare to eat in their presence because their nonstop joking is liable to make me snort wine out of my nose at any moment. This, in the wake of the devastating loss of their sister and daughter, has taught us how to grieve, make peace, and keep life going all at once.

——-
So these were the thoughts I took with me to the Shamrock Yuengling Marathon in mid-March. My first 26.2-mile attempt since the City of Oaks in early November and I was eager to see what I could do. Also, I love this race. It’s the only marathon I ever ran (2012) so I often recall the memories in my mind’s eye, but I was looking forward to wiping off the lens. 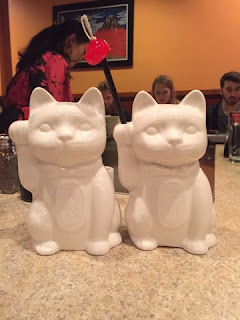 Horrible timing though. We only had three weekends between the offer and closing on our house and we’d been in Asheville cheering on some Team Drea members the weekend before. DP was stressed with work. I was stressed about managing the move.
Enter the cat mugs! My favorite pre-race dinner is hibachi (the cheesy kind where they cook in front of you, making onion volcanoes and bad jokes) and Virginia Beach did not disappoint. The ceramic cat mug for cocktails set me giggling, which turned into howls of laughter as we realized how much the place nickel-and-dimed its customers — e.g. if you want them to sing to you on your birthday, it’s $7.95. Or when the waitress brought the check and told DP: “The chef only gets half the tip. So if you want to tip him 20%, you need to give 40%.” Um….?
We needed a night like that. The closeness of private jokes, reveling in the ridiculousness of it all. It reminded me of Lisa’s family. Even in their tears, you know that laughter is never far away. It’s not okay, but it is okay. 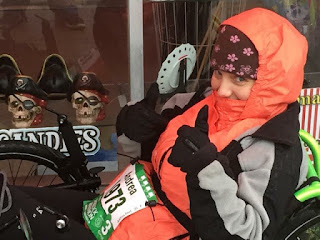 The weather, however, was no laughing matter. 2012 had been perfect — sunny with a refreshing breeze off the water. 2016 was heavy gray with rain squalls, 44 degrees with sustained 20mph winds and gusts up to 30. Really, Lisa? You couldn’t have dialed up a better forecast for me?
But nothing with ALS is easy, seemed to be the lesson — not even a pancake flat, scenic marathon with tons of crowd support. Wearing five layers (including Lisa’s fleece), I clenched my teeth against the biting wind and set out to do what I was grateful I still could.

The best surprise of 2012 had been running through Camp Pendleton for Miles 7-9. Soldiers from the Virginia National Guard lined the streets to cheer on the runners. I was blown away — they risk their lives for our freedom and they were cheering us on?

There were fewer soldiers this time, but I know it would have been Lisa’s favorite part of the course. She loved her job as a senior defense analyst with the GAO. She was deployed to Iraq and Afghanistan four times — I’ve seen photos of her smiling in fatigues, in Blackhawk helicopters, toasting with friends around the world. It was an important part of her self identity, which explains why she was still working until a few months before her death. This (recovering) workaholic appreciates her dedication, even if I was like wow, this chick is crazy! when she told me.
Around Mile 10, I turned onto the boardwalk and was greeted with a full-on headwind and blowing sand. It looked like the ocean was throwing its waves onto the shore. I closed my eyes, reset my gritted teeth, and focused on pedaling towards DP, who was waiting at Mile 13 to help me out of the trike for a much-needed bathroom break — another thankless job for ALS spouses and caregivers.
Sweet relief, a few sips of a diet Dr. Pepper, kisses from DP, and I felt like a new woman setting out for the second half. Around Mile 16, the houses ran out and the course veered off onto Shore Drive, a divided tree-lined highway so monotonous that the race had stuck signs in the ground with dippy jokes to keep the runners entertained. I munched through an entire pack of peanut butter crackers and wondered where my ALS came from.
Military veterans are twice as likely to be diagnosed with ALS as the general population. Endurance athletes are also more susceptible. No one knows why, but one theory connecting these two groups is the extreme pressure they put their bodies under.
Whenever I say this to someone, this is the stretch of road that flashes in my mind. I knew nothing of nutrition when I ran this marathon last time. I should have been consuming about 300 calories per hour — I’d probably consumed 300 calories total by this point in the race, notwithstanding all the months of underfueling I’d endured during training.
I know it’s more complicated. I know that even  if a physical exertion-related link exists, there’s still a major unknown X factor — obviously millions of people serve in the military and/or run marathons, do Ironmans, etc. without getting ALS. But it’s the only risk factor I can come up with for myself. So as I rode through the mostly deserted Fort Story, I turned inward and quietly, fervently praying for forgiveness. If I brought this on myself, I didn’t mean to. I didn’t know better. I just want another chance. Please forgive me. Help me forgive myself.
DP met me at Mile 23 with pretzels, just as he had in 2012. I knew he’d be there, but my heart quaked at the sight of him. So much has changed — everything really — except that. He’s still with me, running alongside all the way through the finish line, hand in hand, cheering me on. Just like Lisa’s husband Sean did for her. So it’s not okay, but it is okay.
Time in 2016: 4:29:18
Time in 2012: 5:15:37
Previous Post
ALS Awareness Month…sigh
Next Post
Swim. Trike. Handcycle.

We love you and David very, very much!!!! Your writing is so eloquent, and your willingness to write so honestly about your thoughts, feelings, and experiences is an incredibly generous gift to other people who are having similar experiences but feeling alone in them or unable to articulate them. We are sending TONS of love down to Raleigh today!!!! Alison, Tom, Drew, and Zelly