I GOT A TATTOO. 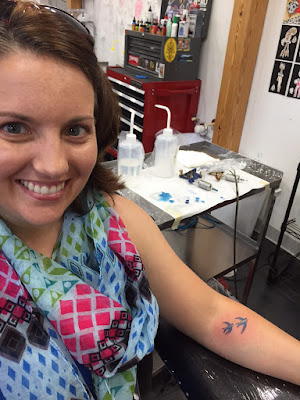 May 29th marked my two-year anniversary of being diagnosed with ALS. We didn’t understand until August what the doctor had told us, but still, that is the date that clinical trials will use to exclude me if I live long enough next year so that’s the date I’ll pick.

So two years felt like a giant milestone. Or rather, a deep breath slowly being exhaled. The fact that I’m still doing marathons and triathlons?? The fact that Team Drea has raised $110,000 for ALS research?? Those are things I never could have allowed myself to contemplate in 2014.

I’m finally letting myself accept the other maxims of ALS beyond its life expectancy — that this disease is incredibly weird, affects everyone differently, and progresses at wildly different rates. I am still progressing, mind you. I walked a city block yesterday and it felt like my limit. Yet, I swam 500yds that morning better than I could have two years ago. Who knows. I’ve given up trying to guess.

I had been planning to get a tattoo for months after listening to this part of Elizabeth Gilbert’s Big Magic on a trike ride:
I know a woman who gets tattoos all the time. She acquires new tattoos the way I might buy a new pair of earrings. She wakes up in the morning and announces, “I think I’ll go get a new tattoo today.” If you ask her what kind of tattoo she’s planning on getting, she’ll say casually, “I dunno….I’ll figure it out when I get to the tattoo shop. Or I’ll just let the artist surprise me.”
Now, this woman is not a teenager. She’s a grown woman with adult children, and she runs a successful business. She’s also really cool, uniquely beautiful, and one of the freest spirits I’ve ever met.
When I asked her how she could mark up her body so casually and so permanently, she said, “Oh, but you misunderstand: It’s not permanent! It’s temporary.”
Confused, I asked, “You mean, all your tattoos are temporary?”
She smiled and said, “No, honey. My tattoos are permanent — it’s my BODY that’s temporary. So is yours. We’re here on earth for a very short while. I just want to decorate my temporary self as playfully and beautifully as I can, while I still have time.”
I love this so much, I can’t even tell you.
…I don’t want to be afraid of bright colors, or big love, or major decisions, or new experiences, or risky creative endeavors, or sudden changes, or even great failure.
BECAUSE IT’S ALL JUST TEMPORARY.

But what to get?

In 2009, a guy with ALS named Tim LaFollette (from Greensboro, NC) sparked a movement that came to be known as Often Awesome. Tim was 29 when he was diagnosed and died two years later. Thirty-six short documentaries chronicled the progress of his disease and the adventures it spawned — playing in a band, benefit concerts for ALS TDI, a wedding, friends and family helping with every aspect of his care.

The whole series is inspiring (and heartbreaking), but this one and this one are about tattoos. He decided to have swallows from his mother’s Quaker songbook tattooed on his arm. His mother (and grandmother) both died of ALS in 1981, long before people understood the genetics of ALS.

In solidarity, the Often Awesome army and strangers began to get swallow tattoos. My friend Michelle, who introduced me to this, has a swallow behind her ear. Even my new (badass!) neurologist has a swallow on his hand.

Traditionally, swallow tattoos are a sign of hope. Sailors would get them because if they saw swallows, it meant land was near and they were almost home.

For awhile, I figured I would get the same swallows. But for some reason, they didn’t quite seem right. For one thing, I loved the look of the flock in flight, but I wanted to get one for each year living with ALS and it would take quite a long time for a flock to get going. 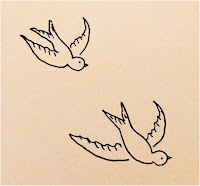 In the move, I came across an (unfinished) wedding scrapbook. The illustrations in the book had simple, sweet line drawings of wedding cakes, dresses, etc…and these doves. Aha!

Next, I had to find the right artist because 99% of tattoos freak me out (what is it with skulls anyway? also made the mistake of googling “crazy cat lady tattoos”) AND a shop that was uber clean and not intimidating. 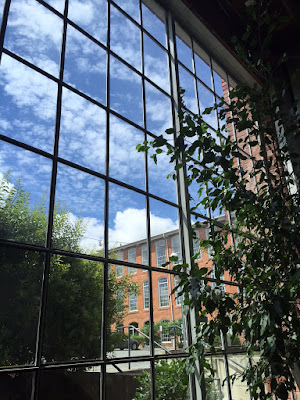 The whole experience was awesome. DP and Julie came (because of course). No it didn’t hurt that much, but then I’ve had acupuncture weekly for two year so maybe I have a higher tolerance for tiny needles. Honestly, the worst part was I had to stay out of the pool for two weeks. 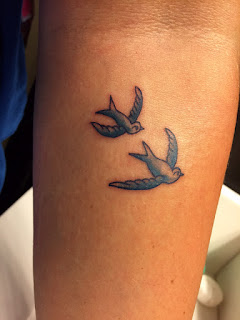 I thought about a couple of different locations (shoulder, ear, back), but I’m glad my dove-ish swallows are perched right on my forearm where I can see them anytime. They look friendly but determined. Serious enough to make a statement but not taking themselves too seriously. They remind me that being brave can lead to beautiful experiences I never could have imagined.

But most of all, there is PLENTY of room left for that flock I was looking to start.
Previous Post
Race for Shy Tuna: Part 2
Next Post
Race for Chris Rosati: Part 1

Love this! You're a great writer! xoxox

Love this! You're a great writer! xoxox

Now I want a new tattoo!!

Now I want one too! You might have just swayed me 🙂

Wow, Andrea! You're so amazing & inspiring! Love ya!

I love them! I hope your arm is covered with a sleeve of doves!! 🙂