I don’t have a formal bucket list because, well, I worry what would happen when I crossed everything off. Call me superstitious.

But I do have a running list in my head of things-I-want-to-do-in-life, which contains things like “Watch Julie Teach 3rd Grade.” (Done!)

“Watch an Ironman” was definitely on that list. What it should have said was “Watch an Ironman that Friends are Racing in Your Honor.” Watching an Ironman is unavoidably inspiring – seeing the power of human bodies, trumped only by the strength and depth of the human spirit. Watching an Ironman that your friends are racing gives you time to contemplate those wonders AND provides you a unique-in-life opportunity to share moments of total elation transmitted through a wave, smile, blown kiss, “hey!”, and if you’re truly lucky, a hug. And it gives you something to structure your 17+ hour day around.

[Side note: If you’ve ever wanted to be a celebrity, doing an Ironman is for you. I can’t imagine any other activity where people would willingly stand around for hours just to catch a glimpse of you and then scream like crazy.] 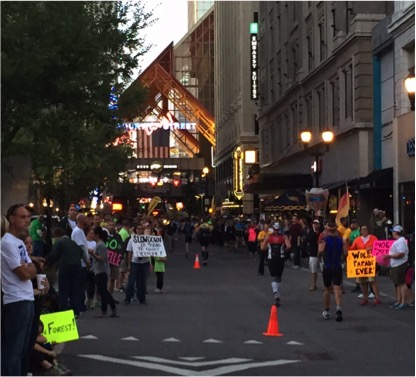 DP and I have been planning to watch Ironman Louisville since last November when our friend Mollytold us she’d decided to go for it. After all, Molly saying I’d inspired her to take the plunge is one of the moments that contributed to my idea for the Team Drea Challenge. The fact that it was the same weekend 10 years after Jon Blais accomplished his unbelievable feat at Kona made it all the more special.

Turns out we had several other people to cheer for: Liz, an online friend who joined Team Drea a couple of months ago, is a speed demon who somehow managed to qualify for (and race) Kona while in med school; Meghan, a friend from Davidson whose triathlon star is rising along with her pro IronTwin sister, Kelly; and Meredith, aka Swim Bike Mom, whose book, blog, and online Tri-Fecta group got me to and through my 70.3 and has had my back since my diagnosis. 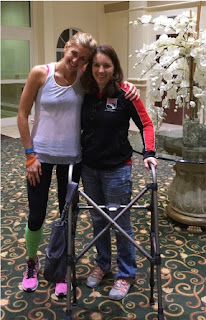 We drove from Silver Spring to Louisville on Saturday, which took 9+ hours (still less time than an Ironman…even for Meghan!) and drove straight to Liz’s hotel to drop off her care package…and, you know, MEET her since we only know each other through Facebook. We talked with her and her parents – good, good people 🙂

Then found our hotel through the crazy maze of overpasses, bridges, and construction that is downtown Louisville, and settled in for the night.

We were still in our hotel room during the swim start, a fact I felt moderately guilty about because – a) we weren’t out there supporting our friends, and b) because if this was my one chance to live out my Ironman dreams vicariously, missing the starting line wasn’t a great way to begin.

Since I really wasn’t racing though, I rationalized that getting bent out of shape over it would have meant I’d traveled too far into my own fantasy. Also, IMLou has an unusual dock start where athletes jump into the water one at a time. No mass start like Kona or even a large wave start so I figured it wouldn’t be that dramatic of a visual. Had I been participating, that absolutely would have been my kind of start, but sadly, I digress… 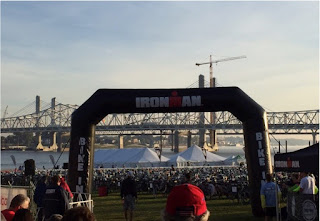 When we got to the swim finish, I saw I’d been wrong. Set against the backdrop of the rising sun and bridges crisscrossing the Ohio River, there was still a mass of thousands of athletes moving together, thrashing through the water like a feeding frenzy of sharks, which was at once terrifying and beautiful.

We stood along the bike out chute so we could watch the athletes running their bikes to the mount line, sopping wet and still pulling on clothes one-handed. Energy was high – a collective sigh of relief that the 2.4-mile swim was over combined with nervous anticipation of the 112 miles of biking ahead, to say nothing of the 26.2-mile marathon after that.

We saw the back of Meghan’s Timex kit as she sprinted down the chute (in fact, Meghan’s backside was all we saw of her all day, she was that fast). We cheered on Meredith, as well as every neon pink helmet we saw, looking for Liz, but missed her. The highlight was snagging a hug from Molly, who gave us a joking-but-not-quite “so this is happening” in quintessential Molly form.

After a leisurely continental breakfast back at our hotel and a stop for good local coffee, we drove 20 miles out to the town of La Grange to watch the bike leg. The course includes a 30-mile loop, providing ample opportunity to see our folks. 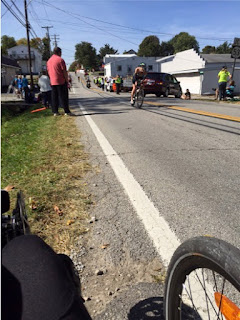 We found ourselves at an interesting spectating spot: down a small hill so most people whizzed by full speed, as Meredith mentioned in her race report, constantly yelling “on your left!” as people tried to pass. We were also close to an intersection where the police were trying to maintain order as they waited for gaps in the riders wide enough to direct cars across, or worse, to turn onto the course. The crowd clearly didn’t like their judgment on some occasions and shouted their displeasure like they were football refs. It got kind of raucous. I kept thinking about the tacks and oil that sabotaged the IM Chattanooga course – it could have been kids…or people who didn’t like their small, sleepy town taken over by thousands of riders and spectators on a Sunday once a year. Civility please.

We saw the speed demons, Meghan and Liz, on their second loop, Meredith on her first loop, and Molly on both. Thank goodness for the IronTrac app giving us regular updates when they passed checkpoints every 20 miles or so. 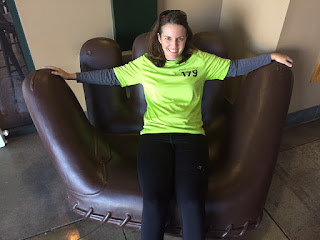 After we got our second “hi friends!” from Molly, we headed back to Louisville. We stopped by Slugger Field for another leisurely meal (& obligatory photo). I mention this so you have a concept of how loooooong 112 miles on the bike takes. And then you get to run a marathon!

Back at transition, we met up with Kathy, Molly’s mom, who reported that she saw her daughter with a BIG smile…now that she was off the bike.

I was worried about the marathon, since Molly has been battling painful foot issues all year. I was mostly concerned that she wouldn’t quit if she needed to – this the girl who ran 9 miles with a stress fracture to finish a half marathon.

“Oh, that’s the least of her worries!” Oh yeah?? It was just after 5pm so she had a whole 7 hours to WALK the marathon. She was going to be an IRONMAN!

The run course also had a double loop so we stationed ourselves to be able to see everyone we were following…and happened to be across from the most hilarious man and his daughter imploring racers to pet his lucky beaver. We dissolved into giggles, every time.

Meghan had already passed our spot, twice, on her way to winning her age group in 10:07:43 and stamping her ticket to Kona! We saw Meredith, who recognized my trike and blew kisses (major thrill for me!), then moved closer to the finish line and finally connected with Liz just before she was about to cross the finish line, 9th in her AG at 11:25:50. We saw Molly a few times – she looked so strong, and so very happy. 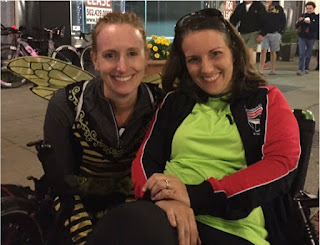 Just before she passed us for the last time on her way to becoming an Ironman, a bumblebee biked up and gave me a huge hug. I assumed it was Coach Carrie McCoy from JustTri, but it turns out she wasn’t feeling well so her athlete, Kelly, took over bumblebee cheering duties with David (all Team Drea members). She gave me a care package from Carrie that included a sweet card that made me cry. Love you guys and can’t wait to see you at City of Oaks!

Then we chased after Molly and found her past the finish line – now an IRONMAN having beaten her ambitious 14-hour goal by more than an hour, coming in at 12:52:38!! She pronounced it “awesome” and wants to do another one – not bad for a first-timer! She promises to do a race report, complete with an explanation of how it came to be that she covered an entire Milli Vanilli song in the changing tent… 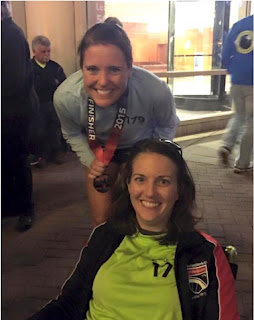 Molly, I couldn’t say it to you in person because I would have cried, but it meant so very much to me that I could play a small part in your Ironman journey. You are a true friend and I loved watching you out there – smiling even while you struggled, appreciating the reward of being able to do this race after a year of training. I’m so glad it went so well, but I would have been just as proud of you if you just set foot on the starting line. Enjoy your achievement…you worked so hard to earn it!

After escorting Molly and Kathy back to their hotel, I wanted badly to go back and cheer Meredith and the later finishers in. But my back and legs had had enough of being in the trike and I am learning when not to push myself. I shouldn’t even post this, but here’s how I watched the finish line until midnight… 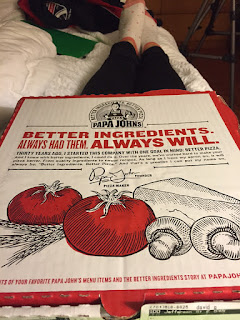 It was such a fun day. Even if you aren’t into triathlons (or think you aren’t), I highly recommend putting spectating one on your bucket list. Every single one of the competitors are elite athletes in my book, heroes to their loved ones, and role models to their children. It’s so inspiring to watch…and envision what you could do.