October 28, 2015
Uncategorized
No Comments
My (un)Race Report
My journey to the finish line at the Lowcountry Trail Half Marathon has been weird and winding.  I set out on January 1 2015 with plans to complete this October race as part of the #TeamDreaChallenge while raising money and awareness for ALS research.  In 9 months I trained 241.2 miles while posting weekly #tbt memories of my most favorite roommate ever, Andrea Lytle Peet.  Along the way, I had a variety of training partners who I’d like to thank:
As many of you know, that nagging hip pain turned into a full blown injury (stress fracture) after an 11 mile training run.  I was less than 2 weeks away from the October 10 race day and it was devastating to know that I wouldn’t be able to complete my goal.  But I was still committed to supporting my training partners who planned to run (Miranda, Megan and Monika).

However, Rain-mageddon happened the week prior to the scheduled race, a trail run at a Parks and Rec facility on the Stono River.  Even 1 week after the devastating rains and flooding, the trails of Mullett Hall Equestrian Center were not raceable, and the event was rescheduled to Sunday October 25.
Unfortunately, Megan and Miranda were unable to run on the rescheduled date.  But with warrior spirits, they refused to give up and held the first annual Carolina Bay Half Marathon on the morning of the original event.

I met them at the halfway mark with my sign of support, water and sustenance. 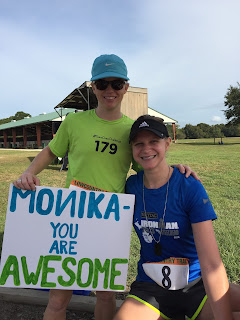 They celebrated with champagne at the finish line (every race should have this) and homemade finisher medals.  Bill came home on Sunday October 18 and we celebrated with another neighborhood party.  Welcome Home Bill and thanks for your service! 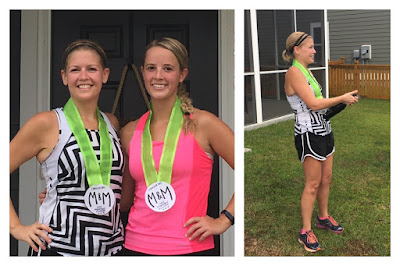 [Editor’s note: Team Drea members are getting really adept at making up our own events.] 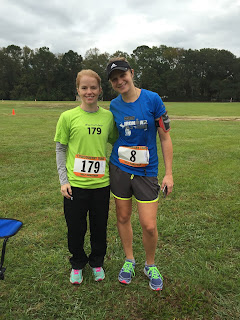 Monika managed to extend her training by 2 weeks to run the rescheduled event. Many people who originally registered were apparently not available on this date, so it was a light turnout of about 150 for the grouped start of the 5K/Half Marathon.  My mom tagged along (I think she’s worried about me getting around on the crutches) and we set up camp at the start line.  The course was planned to repeat one time, but due to continued flooding of some of the back trails, the new race plan was a loop x 3.  Just before her start, Monika proudly announced her plan for a 2 hour race.  She’s ambitious, that girl, considering we trained for a 2:10 race. 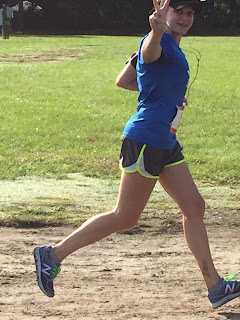 Monika came around to finish the first loop in 38 minutes, so she was definitely on pace her 2 hour goal.  We watched as people fast and slow came around to complete their first loops.  There were no costumes, though, which was quite disappointing (I was hoping for at least 1 banana).  Monika looked great again as she came around after her 2nd loop in under 1:20, still on pace for a 2 hour race.  After she passed, we moved our little camp over to the finish line to see the first man cross the finish line in under 1:25.  It was warming up quickly at this point and reached nearly 80 degrees by 10:30am.

I can’t tell you how excited I was to see Monika make the last turn and head for the finish line as the clock rolled over to 2 hours.  Her official time as 2:00:35, good enough for 2nd place in her age division!  I am so grateful that I was able to live the race vicariously through Monika! 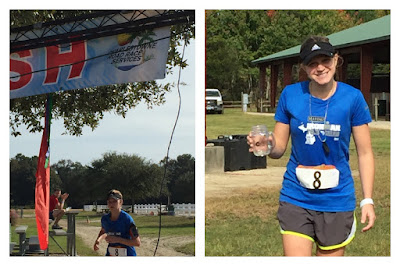 Thanks to everyone who donated and helped raise over $2000 for ALS research.  I am so grateful for the Team Drea Challenge, despite my injury, and look forward to becoming a triathlete in 2016 as part of the Ramblin’ Rose super sprint triathlon series.
Previous Post
Ironman Louisville Spectator Report
Next Post
You (Almost) Sunk My Battleship!