I woke up this morning (still in my neon green 179 shirt) overwhelmed with how to describe our unofficial “race” yesterday, officially titled the 1st Ever (and Only!) Team Drea Renegade Rose Dri-athlon. Looking back at all the photos on Facebook made it that much harder. How do I distill all of the love, friendship, camaraderie, and spirit down into words?

Well, I can’t. But I’ll still try to do it justice.

When Ramblin’ Rose sent out their race week email to all athletes on Tuesday, here was the perfect weather forecast:

But as the week went on and local TV carved out more and more time dedicated to Hurricane Joaquin, we began to get worried. It was already raining in NC and had been for a week+. Ironman Maryland was cancelled, then the Pinehurst International triathlon. I’d hoped the pool swim would spare Ramblin’ Rose Chapel Hill, but when Julie and I came out of the gym on Friday after our last pre-race swim, we got the word that it too had succumbed to the deluge of rain and mud.

Like sane 30-something women, we headed straight to the nail salon for pedicures and perspective. I was already getting text messages saying things like, we should still get together and do SOMETHING! Sure, but what can we organize in 24 hours for early on a Sunday morning?

By the time we left the salon, the rain and wind had picked up and the temperature had dropped. I was shivering. Julie and I looked at each other and said at the same time, “I don’t WANT to do a triathlon in this!” and “Thank God it was cancelled!” Then we cracked up and went to dinner with my family, leaving the planning for Saturday morning.

By the time I woke up on Saturday, Heather had already emailed the GM of LifeTime Fitness Raleigh and gotten permission for us to hold an alternative race there on Sunday at 7am…for FREE! The only catch was they needed to know exactly who was participating.

So I polled everyone from Team Drea who had planned on doing Ramblin’ Rose…we lost Carissa who was going to drive down from Ohio, and Carolann, who was nursing a sick dog, but we gained Monica and Shannon, who’d planned to spectate, AND Ramblin’ Rose’s race director, Amy, in between sessions at Fleet Feet handing out shirts to disappointed RR participants.

[Side note: I have serious respect and appreciation for the way Ramblin’ Rose handled the cancellation. It absolutely would not have been safe to hold the event on Sunday. They waited til as late as they could, hoping the weather would clear, but not too late that people had already started to travel, couldn’t get 24hr-in-advance refunds on hotels, etc. It’s a no-win situation for them, and yet they were awesome on communication, offered 50% discounts on future races (even though their policy is no refunds), staffed a desk for two days to hand out shirts, etc. And that is leaving out some pretty harrowing personal circumstances that went on for some of the race organizers last week. Seriously people, there is no reason to complain that they can’t mail shirts for out-of-town competitors, sheesh.]

Heather and I decided to do a modified version of LifeTime’s Indoor Tri. 250yd swim (like RR), 30 min on the stationary bike, 20 min on the treadmill. No timing. DP volunteered to be the race director (to which he said: This is also my first (and only) opportunity to be a race director. In case you were wondering, it is strikingly similar to any other race in that I am doing whatever Andrea wants! Ha!) As a private gym, it wasn’t spectator-friendly, so we arranged to reconvene at a Panera down the street for breakfast afterwards. Annie named it a “dri-athlon,” Shaw called it “Renegade Rose,” and voila…just like that, a race was created in less than 24 hours via text and Facebook.

After a bleary-eyed check-in at 7am, we tromped out of the locker room as a group and split up into lanes. Julie and I shared a lane like we’d planned to for RR and away we went. I had a couple of nose plug issues and mental “can I do this?” freakouts, but all in all, it was a good swim for me. Julie estimated 9 minutes, which creamed my 12:43 time from last year. 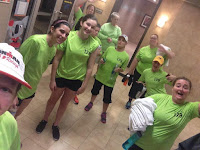 “T1” in the locker room was hilarious. Showers, clothing changes, no sense of urgency — except from me, since I’m so darn slow. A few people (not naming names!) even had time to blowdry their butts so they wouldn’t be so wet on the bike 😉 We came out to find an exasperated race director, since the ladies locker room was the one place DP could not go! 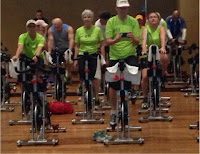 The bike was pretty uneventful for me. Julie and I found some recumbent stationary bikes and pedaled along to some lovely (and deceptively flat) scenery of San Francisco on the screen. Some others got a little more than they bargained for when they accidentally ended up in a spin class that started during their 30min bike leg!

“T2” was a full 3 steps for me to get onto the treadmill. DP and I negotiated the incline and speed, but when he walked away, I couldn’t help bumping it up to 1.2mph, which turned out to be too fast. I caught my dragging foot on the belt and down I went. Thankfully, it was one of my slo-mo falls in which no harm is done and I can laugh it off. But I did have to endure this I-told-you-so look for the rest of my 1mph walk:

The finish line was a yoga/zumba studio, complete with Heather’s banner, my dad’s signs, and James & Monica’s kids handing out the awesome medals that Julia made for us all:

And of course, a group Blazeman Roll:

A HUGE thank you to everyone who participated and helped to make this such a special day, and to LifeTime Fitness for allowing us to use your beautiful facility!

We had a great time at Panera catching up with each other and the spectators that would have been out there cheering us on at Ramblin’ Rose. I was touched when Amy put a real podium-level RR medal around my neck (just as she promised she would!). 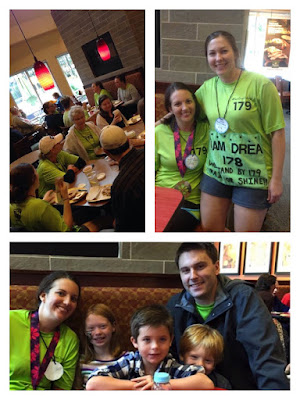 My thoughts kept drifting to Barcelona where, meanwhile, my DCTri mentor was doing his 7th Ironman and running the marathon in a Team Drea shirt, carrying the #179 bib from Peasantman, the triathlon he organizes every year. Well, it wasn’t anywhere near the same scale, but I organized a race and wore my Peasantman swim cap in your honor, Tuan. Congratulations!! 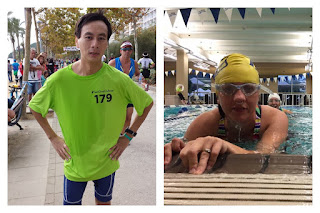 One comment from Stacy sticks in my mind: I surprised myself. She was one of five out of our tiny field of 14 participants who became triathletes yesterday. The others were Julia, Shannon, Kristy, my mom, and my dad (who was just supposed to be spectating, btw).

I surprised myself too. I haven’t spent much time on stationary bikes or ANY on treadmills, but I did okay, got a good workout, and felt better afterwards — less stiff and stronger.

This was supposed to be my last last triathlon, but said who? ALS? Not necessarily. If there is one thing I have learned from this disease is that everyone has a different progression.

Me? Why would I say such a thing? I was trying to come to terms with “reality,” but reality is that my swimming improved this summer, my triking is fine, and my walk is only a little worse than it was last year.

So here goes…I am saying out loud that I am training for Ramblin’ Rose Raleigh in May 2016. I will sign up on December 1st when registration opens. I will not do what I did the past two years and be surprised 6-10 weeks ahead of the race that I could still do it if I trained. I will train over the winter and then check back with reality. If I can only do a relay, fine. If I can’t do it at all, I won’t. But I will be there at the finish line cheering just the same.

Because as I learned from my very amazing friend, Boston marathoner, race director, and cancer survivor, Amy, you can’t finish what you don’t start.

I AM WITH YOU!! No surprises this time 😉

Wow! What an amazing and inspirational pivot… plans made, plans dashed and then remade in a way few people could have imagined let alone pulled off… hats off to you Andrea and all the Dri-Tri participants!

Loved reading this update, Andrea, and seeing how you're continuing to overcome so much and celebrate along the way!

All thanks to Dr Aba, I am here to share a life testimony of my self on how i came in contact with a real herbalist who helped me. i appreciate everyone for taken their precious time to read my testimony, 6 months ago i was diagnosed with ALS, this means that 6 months ago i was ALS positive when i told one of my good friend about this, she sympathized with me and then she said that she was going to help me out, she told me that we should do some research on the Internet, we came across Dr Aba and my friend said that she has come across a lot about him and said that he is a real herbalist remedy to all illness, i was really surprised on this and confused as well, I was so speechless and quickly i contact him to help me and he prepared some herbs for me and send it across to me and he told me the way i was going to be taken the medicine which i did, and in the next 2 weeks i went to the hospital and they said that i am now ALS negative, i am very happy about this, then i contacted Dr Aba again to tell him the good result , i asked him how he was able to help me, and he said that he was gifted with it that he can cure any disease. also reach him because health is better than wealth Email him via"dr.abaherbalhome@gmail.com you can call or whatsApp his number on +2348107155060 see more at drabaherbalhome.webs.com