Lightning blog catch up round

Man, there is so much going on.  The best I can do is a lightning round catch up…

After complaining to the universe, our vacation calmed down.  No more falls, no stolen credit cards.  The only crazy thing was the wind which kicked up to 20mph and stayed that way for two days.  We hung out on our porch, leaving only to forage for pina coladas and seafood (totally roughing it, obviously).  Our last day was a lovely beach day, though the winds were still up and one micro tsunami managed to soak all our stuff but NOT ruin the Kindle, either phone, or the electronic button to the car key…whew.

All in all, it was both a fun and relaxing vacation: 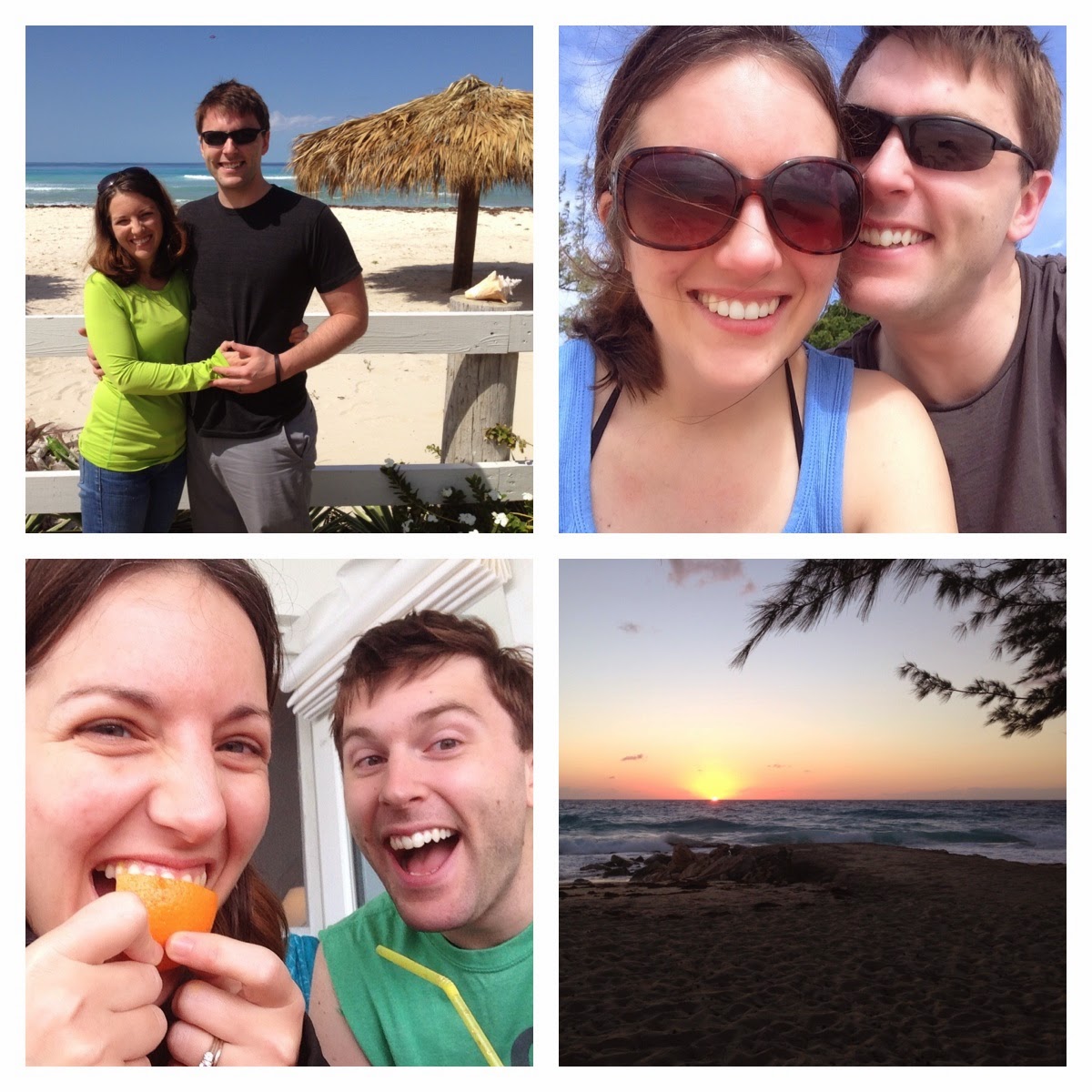 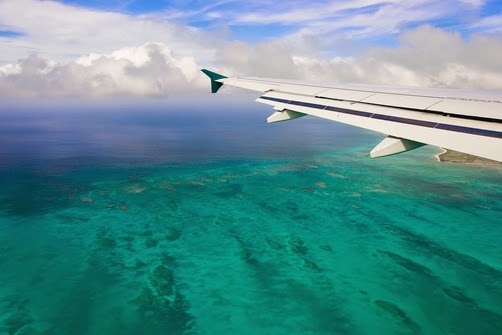 The puddle jumper back to Providenciales was completely different this time.  We’d come in during a storm so the clouds obscured the gorgeous view of the Caribbean water.  My phone failed to do it justice so this one better matches my memory:

Honestly, one of the most amazing views I have ever seen.

I hate to break into an otherwise cheery post with the depressingness that is the ALS clinic.  Since there’s no cure for ALS or anything to slow down progression, the only “treatment” available is a quarterly multi-disciplinary parade of specialists and therapists giving their best suggestions on how to modify normality in order to keep you as safe as possible through your inevitable decline.

I didn’t get any bad news, but damn if they can’t turn the status quo into gloomy foreshadowing.  I really haven’t had any significant changes since my last visit 3 months ago (thankfully).  Still a fall risk but walking okay, occasional choking on water but a straw helps, sleeping okay, breathing okay (<— that last one is a BIG deal).  But because we need something to talk about over the course of the 3-hour visit, we discussed wheelchairs, foot orthotics, blenders that pulverize chili so it can be sucked through a straw, whether it’s okay for me to drive, whether I should consider a feeding tube.  I KNOW they mean well — it’s a progressive condition and you have to plan ahead, but still, it’s kinda hard to take at a point where I feel relatively stable.

In those moments, I found myself remembering the neurologist that recommended 12 months ago that I shouldn’t go on vacation to Hawaii.  And about everything I’ve done in that year: Hawaii, a triathlon, the Walk to Defeat ALS, a turkey trot, Turks & Caicos.  I promise I get it.  I’ll be careful.  But let’s not get ahead of ourselves, please.

Best. Birthday. Ever.  Some years, I want no surprises.  I know what I want and ask for it.  And everyone indulged me.  THANK YOU for a most perfect day! 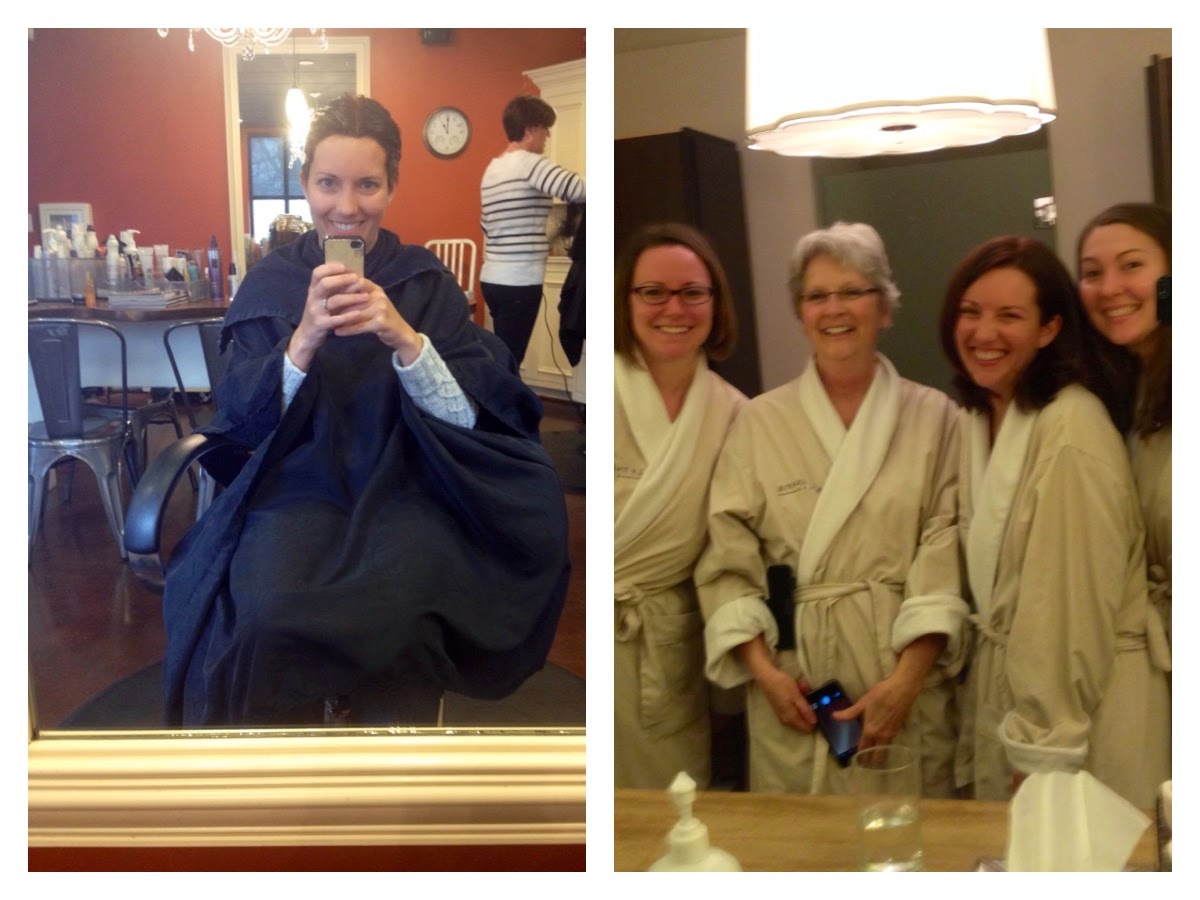 After the ALS clinic, we headed straight to Raleigh.  DP, my amazing husband, scheduled an appointment for my first professional hair coloring EVER and first haircut in 6 months. The stylist was genuinely nice and she seemed to be on top of her game so I gave her full control.  Because it drives me crazy when women cry on reality makeover shows when their hair gets cut off.  Like, it’s hair — get some perspective, people.

Then my mom and I met my friends Julie and Carrie at a spa for pedicures, massages, and facials.  So nice and relaxing, but I can’t believe that people do this on a regular basis.  It parallels triathlon as a money suck…now that’s expensive 🙂

Then we all met up with DP and my dad for dinner at my favorite mexican place.  And yes, I wore the sombrero: 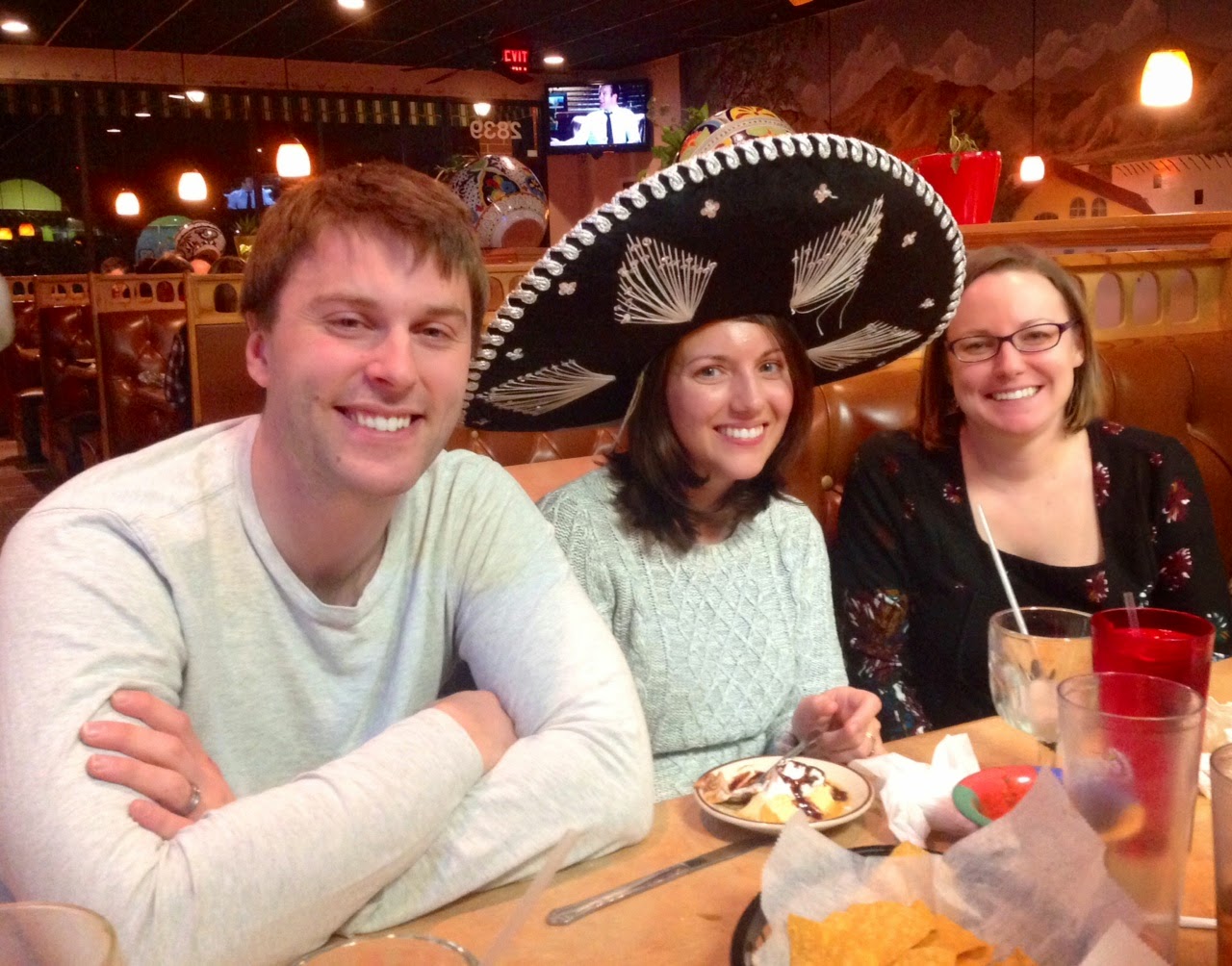 Then we went back to my parents’ house.  We meant to embark on a 1000-piece puzzle, but after so much relaxing, we weren’t in the mood for Mr. Thomas Kincaid’s watercolor-grey-sky-meets-bluish-grey-water shenanigans.  So we went for the tiramisu (again, my fav) and silly props instead: 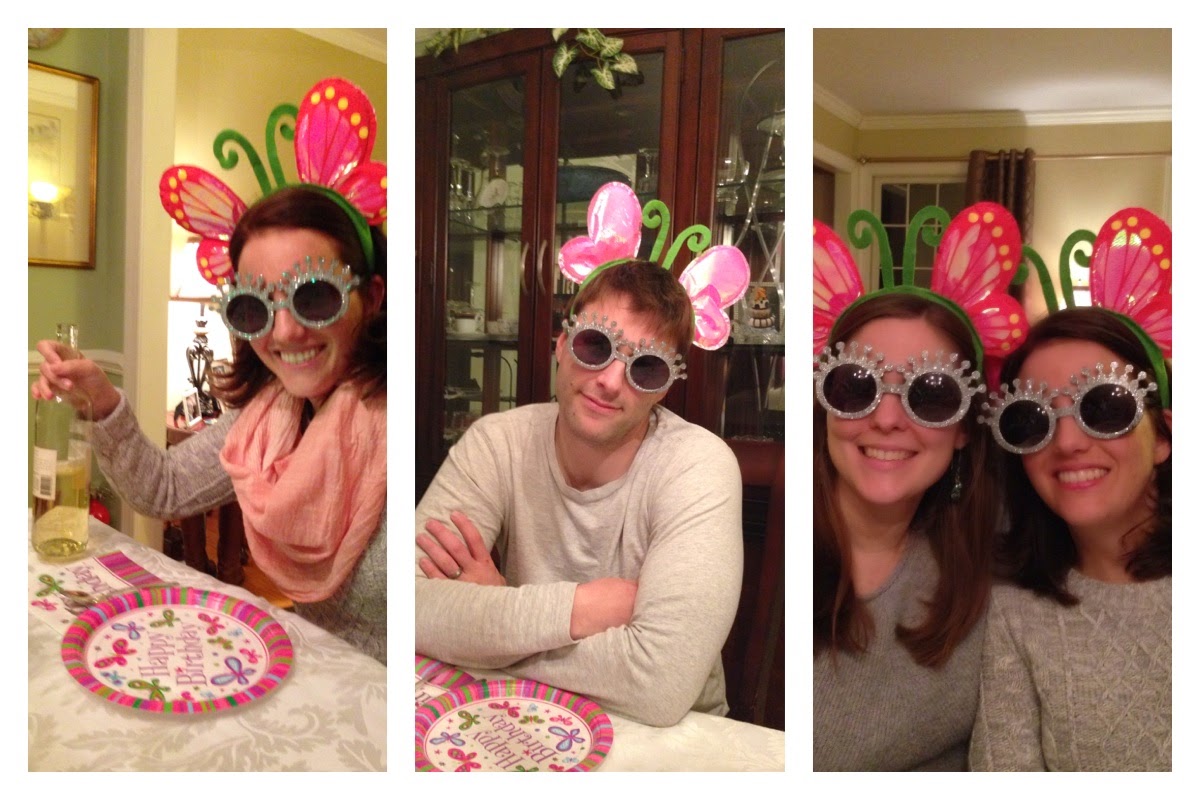 It was a ball.  Thank you DP, Mom, Dad, Julie and Carrie for making my birthday so special 🙂

It just so happened that supporters of the Blazeman Foundation organized a Cycle for ALS event in Fuquay-Varina the weekend we happened to be in NC.  Cycle for ALS events are some of the BMF’s biggest fundraising events during the year.  This one was at the ClubWorx gym (thanks for hosting!)

Thanks to Carrie’s publicity, we had lots of friends and at least 7 Team Drea Challengers there.  It was especially nice to see parents of my friends who came out to support us — even though the kids are scattered around the world.  It was also nice to get to know James & Monica, who organized the event, and their kids.  James is a 2x Ironman whose grandmother died of ALS. 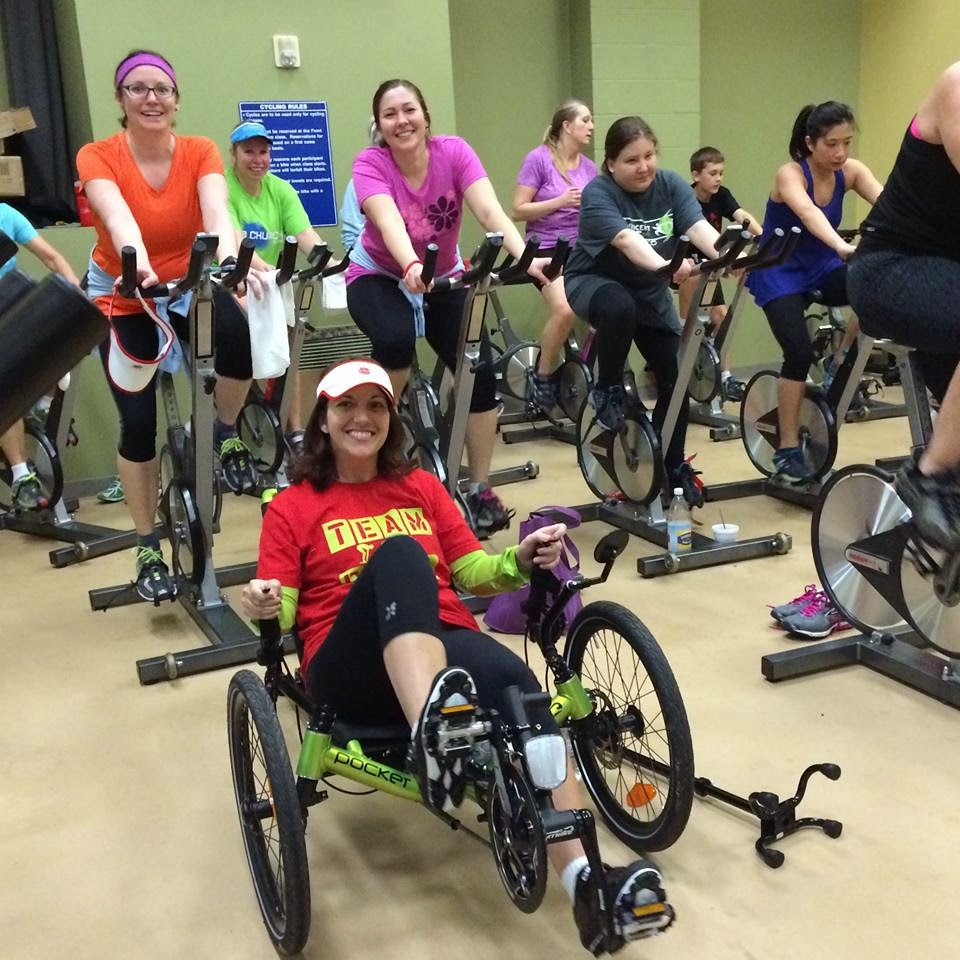 The whole 4-hour event was totally low-key and fun.  Spin instructors kept up the encouragement, but it felt a lot less intense than a normal 1-hour spin class with people coming and going and the organizers handing out water and raffle giveaways.  It was also a great mix of people touched by ALS in some way who hadn’t necessarily taken a spin class before and members of the gym who just wanted to bike or were part of the gym’s team challenge.  They helped adjust the bikes and cheered everyone on — lots of stranger camaraderie.
We brought my trike and trainer.  I wasn’t fast but cycled for an hour in one sitting and 25 minutes during another.  It felt great, but I was careful to quit when I got tired.  I surprised myself — I didn’t know I still had that much endurance.  Take that ALS clinic 🙂
So many great photos of the event: 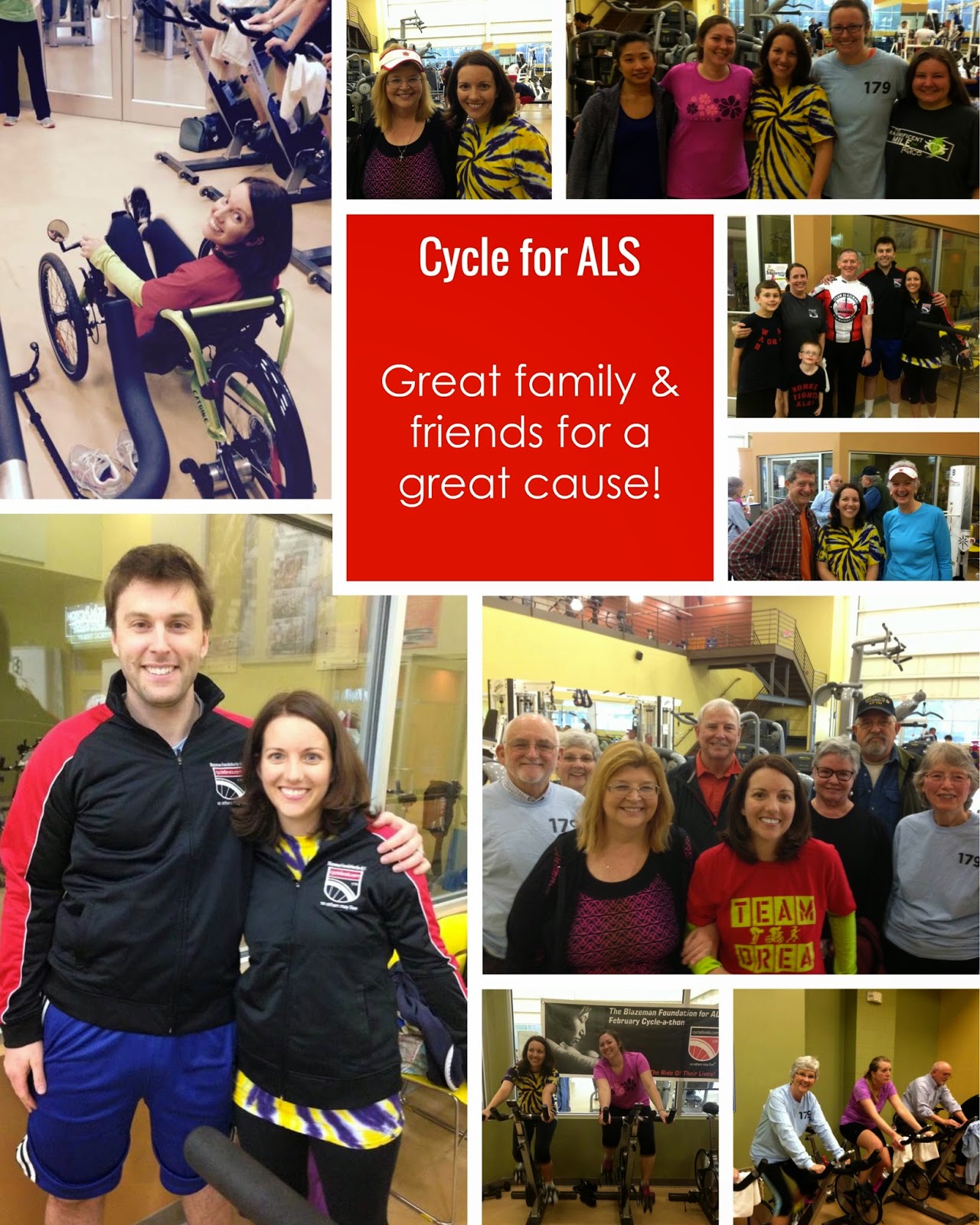 PS: For people wondering about my “costume” changes — there was too much I wanted to wear!  Certainly, the (original) Team Drea shirt.  But I also just received a tie dye shirt from Shy Tuna’s Tie Dye Love Ministry — Mickey (aka Shy Tuna) sends them to pALS (people with ALS) around the world to bring them joy.  So that seemed fitting.  And last, but certainly not least, James presented DP and me with Blazeman Foundation jackets of our very own — we love them, thank you Mary Ann & Bob! (Jon Blais’ parents)
—–
Teaser
So maybe I did overdo it a little because I ended up with the flu (which is why it took me so long to post this).  I’ll skip describing the cough-filled week that ensued but it mostly gets me caught up to now.  There are NEW Team Drea Challengers and some other important life changes going on (no, not a baby) but they deserve their own posts so…more to come.
Happy Friday!
Previous Post
Turks & Caicos: Part 1
Next Post
Meet the Team Drea Challengers! — Part 2

Don't take this the wrong way, but everybody else looks kind of normal in those birthday prop headdresses, but David?! What a photo! 😉

Great recap Andrea!!! Love the pics!!! Your hair looks great too!
Bob wore your shirt last weekend to the cycle event!!!!
Thinking of you and Dave daily!!!
Love,
Bmom and Bdad