By the grace of God and power of intermittent wifi, I am blogging while sitting on our porch watching the waves roll in.  It is a very peaceful morning.

It hasn’t been a perfectly smooth vacation.  For all the Google image searching I swooned at in advance, I forgot that in real life, things move: the wind, waves, sand, undertow.  And with ALS, things like that can become a big deal, fast.  Snorkeling, for example, got nixed immediately when we tried it — all of a sudden, visions of being sucked under, crashing down onto underwater coral or a sea urchin, and choking on seawater (since choking is a hazard for me anyway) became a little too real and we both came out of the water sputtering.  For a girl who has grown up going to the beach and considers the very best part splashing around in the water, that was a very hard realization to take in. 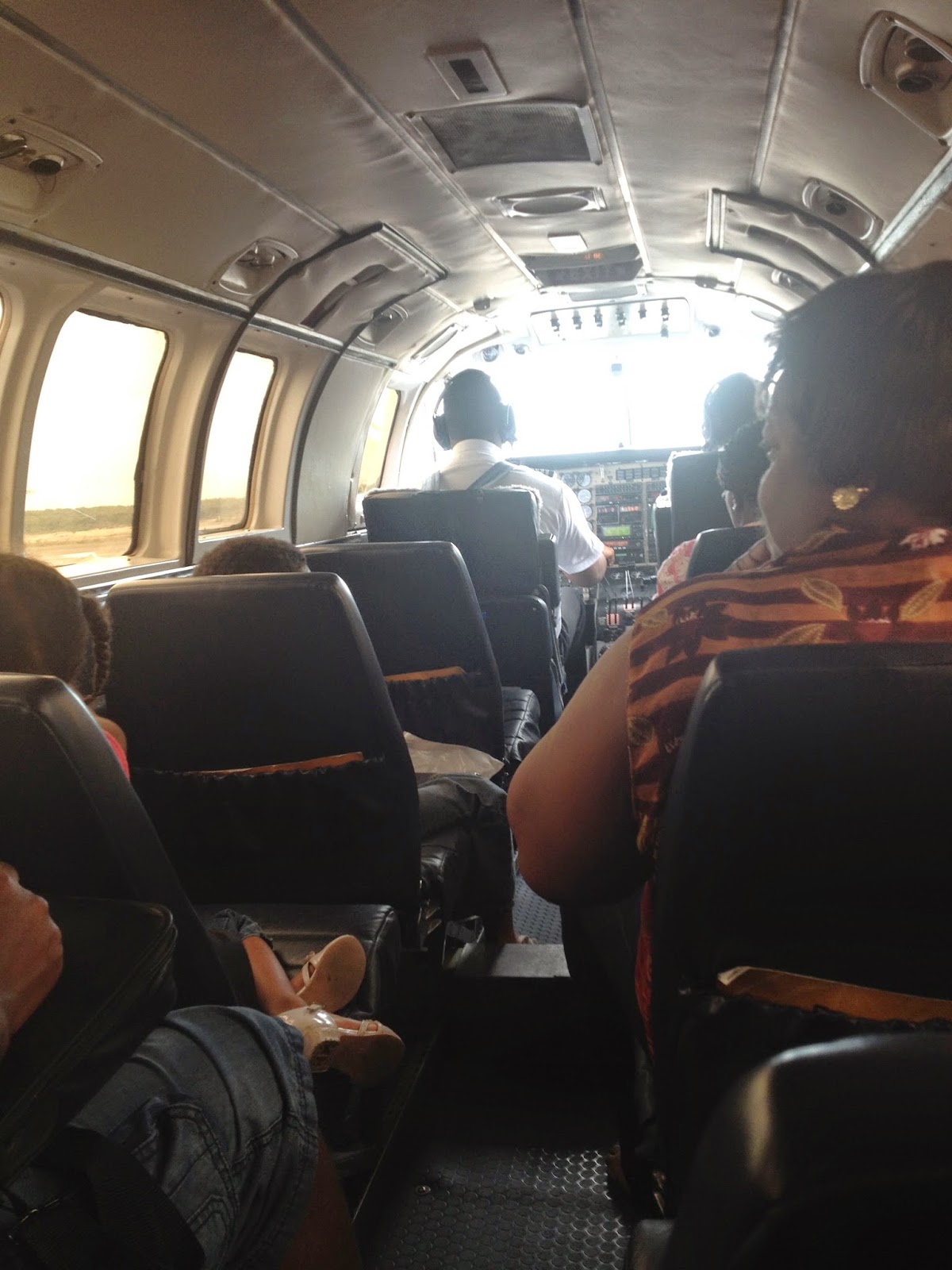 Also, Grand Turk is a little more third-world and remote than we realized (Exhibit B, the plane we came in on) — a fact that became very real on Sunday night when I got up in the middle of the night to go to the bathroom and, sans contacts, misjudged the distance to the sink that I was reaching for to steady myself.  I ended up bashing the back of my head on the toilet paper dispenser, leaving a bloody gash and us realizing that we didn’t know how to call for help or if there is even an urgent care place anywhere on the island (there is, we found out later). Fortunately, there were enough minutes on the house cell phone to call DP’s mom and dad and for them to reassure us that I didn’t have a concussion, didn’t need stitches, and to just keep applying the neosporin.

And then there’s our rental car.  Grand Turk is small enough that there’s no rental car place.  The guidebooks and info from the owners of our VRBO just say to call “Tony” or “Nathan.” DP got a price of $80/day from Tony and $400/week from Nathan, which got reduced to $300 with a single haggle (a hagglet, if you will).  A guy comes by, drops off the car, DP asks about paperwork and how to pay with a credit card, so the guy comes back 15 minutes later with a blank scrap of paper and writes down the card number.  DP asked for a receipt and the guy says, “I’ll come back tomorrow.”  We haven’t seen him since but I’ve been watching our account like a hawk.  So far, nothing’s been charged, including the $300.  Yeah, I’ll be canceling that card the second we get home.

There was absolutely no gas in the car.  We figured out why as soon as we found a gas station — it’s $6.60/gallon!  We put two gallons in and that’ll probably last us considering the island is 7 miles long and one mile wide.  Every single warning light is on in the car and turning the steering wheel makes a noise like the donkeys that are wandering freely all over the island.

While this is a little extreme for us, it’s not so far out of the realm of some of the other traveling we’ve done.  We’ve both traveled in the Caribbean and Latin America in less than the finest of accommodations: chicken buses, hostels, and the like.  But we’ve never done it with ALS in the picture, which adds another dimension of calculation.  It feels like we’re always calculating here. 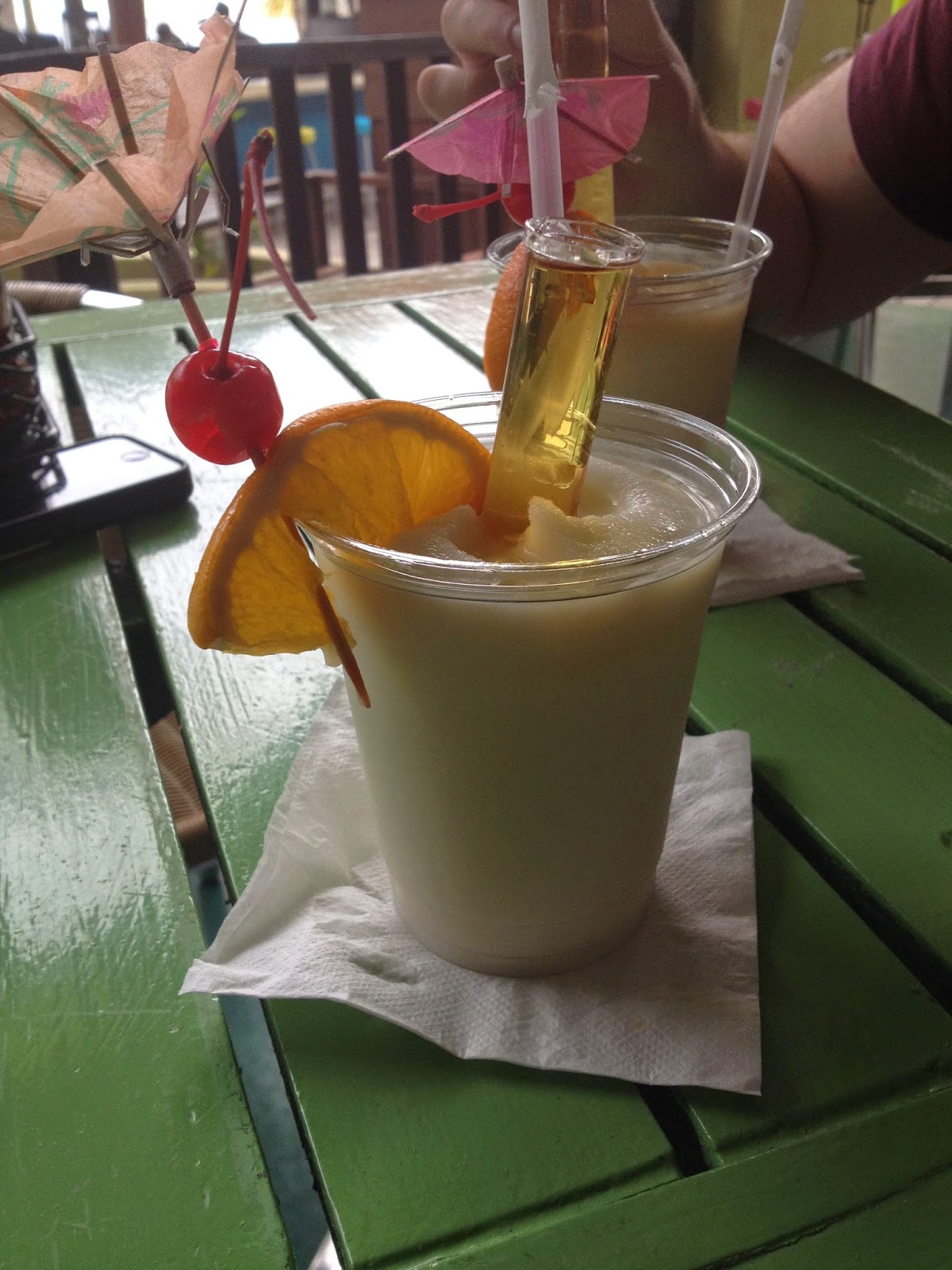 Not to say it’s been all bad — it hasn’t, not at all.  We’ve spent 2.5 days hanging out on gorgeous beaches watching the ocean, which is beautiful and refreshing and never gets old.  We’ve had some terrific food and lovely pina coladas.  For the most part, we’ve been able to take it all in stride (or at least laugh at it after the fact).  We are grateful to have the means to have this little adventure after all…plus it’s still 75 degrees here and 34 at home.  But it explains why we are loving hanging out on our porch and reading today.

DP is reading The Kite Runner (which is on my top 10 list of favorite books so I’m sneaking peeks over his shoulder).  On the Kindle, I’m rotating through Wild, Tales from the Bed (an ALS memoir, get your mind out of the gutter!), and Brene Brown’s The Gifts of Imperfection.  Her opening quote smacked me in the face as I was sitting on the beach contemplatively staring at the ocean:

Owning our story and loving ourselves through that process
is the bravest thing that we will ever do.
I’m trying.  I’m certainly putting my story out there and I’m trying to learn how to accept myself through it despite changing expectations, difficult realities, and the fate I’m told is out there for me.
But the truth is, you get one life to live and this is mine.  And as long as I have my family, friends — and most especially — DP to navigate and laugh about it with me, it’s pretty easy to love 🙂
Previous Post
Team Drea Challenge Guest Post #1: by Ashley
Next Post
Lightning blog catch up round

We love you guys so, so much!!! Sheesh, what an adventure!! Any iguanas running through your yard this time?;)

Given all of the shark-filled videos that we've watched in telling the kids about where you're vacationing, I think that it's just as well to be on the porch instead of the reef!;) We miss you TONS and can't wait until you're back sharing the freezing weather with us.:)

Haha — no iguana sightings so far (and yuck). Just donkeys, horses, dogs, and cats (which you know we want to take home). We miss you too and can't wait to catch up when we're home. Give the kids a hug for us and snuggle our fur babies if you are able to visit them. Love you!

Happy to hear you are in the warm weather, love your story telling and the fact you both can laugh at it!…take it all in…and remember, what ever you do…get it on film!(Blazeman's words)!
Love,
bmom and bdad
xxxooo

I love the Gifts of Imperfection. Daring Greatly is another fantastic book from her. Enjoy the beachy goodness, the weather is turning from cold to colder by the minute in DC.

Oh, I LOVE Wild and Brene Brown. She has the best Ted Talk EVER! I hope that despite the unexpected obstacles, the trip continues to bring laughter, peace and joy.
–your newest blog follower, Jillaine

You go girl! You were delightfully smart, organized and energetic at Star Communities. I have no doubt you'll bring the same perspicacity to your personal and new professional challenges. I look forward to more from you in your blog and send warm greetings.

[…] after we returned from Turks & Caicos, Shy Tuna and the idea of writing a book about courageous people with ALS kept swishing around in […]