First off, I just want to thank everyone for the amazing support you provided after my last blog post.  I was completely overwhelmed and humbled. I tried to keep up with the correspondence, but kind of fell behind. Still, I read every single message — please know that they touched me deeply. I am equally grateful to DP’s family and the friends who have reached out to be there for him as well.

With that, here we go…be warned, it’s a long one:

Fortunately and unfortunately, the medical mystery tour appears to be coming to a close. I went back to the neurologist who thought it was spinocerebellar ataxia, but upon reexamination, he said he was leaning away from that diagnosis. Instead, he wanted me to see a specialist to see if it might be ALS or PLS.

Quick primer on ALS and PLS:

In order for you to move any muscle, two nerve connections have to happen: one between your brain and spinal cord (upper motor neuron) and between your spinal cord and the muscle (lower motor neuron). Amyotrophic lateral sclerosis (aka ALS or Lou Gehrig’s disease) affects both upper and lower motor neurons, while primary lateral sclerosis (PLS) affects upper only. This difference matters a great deal — while PLS is not considered to shorten life expectancy, ALS is typically fatal within 2-5 years with only 4% surviving for longer than 10 years. This is because when the lower motor neurons stop communicating with the muscles, the muscles atrophy.  Most people with ALS die of respiratory failure.

The ALS specialist I saw at the end of May concluded that it is at least upper motor neuron based on symptoms (so no need to pursue the NIH Undiagnosed Diseases Program). She repeated the EMG needle test to determine whether the lower motor neurons are being affected. While my results are still within the normal range, she saw some differences from the test I had in January, making ALS a possibility. But for now, she is just putting me within the motor neuron disease (MND) umbrella without a more specific diagnosis, which gives me access to some ALS clinical trials and other ALS resources. If I consistently pass the EMG for several years, it will be classified as PLS.

While I’m trying to be optimistic, PLS is less likely. For one thing, it’s much more rare — the ALS Society of Canada estimates that, applying U.S. statistics, there are probably 50 Canadians with PLS. It usually affects older people (median age 50.5) and has a very slow progression over a number of years. Day to day, I only see small incremental changes but I still went from a half Ironman triathlon 9 months ago to walking at 26-minute mile with a cane today.

Nothing and a lot to do

If it is ALS, there’s very little that can be done to slow progression. My neurologist started me on riluzole, the only FDA-approved drug for ALS, which clinical trials have shown to extend the lives of ALS patients by a whopping 2-3 months.

On the other hand, I’ve been cleared to exercise as much and in any way I want (hello!!), as long as I’m safe. Using my muscles can stimulate new nerve growth while keeping the muscles as strong as possible. So I’ve started swimming 2-3x a week, working with a personal trainer, and doing PT at the National Rehabilitation Hospital 2x per week. I’ve also had some great success with acupuncture to take the pop out of my incredibly tight hamstrings. And I’m signed up for an ALS exercise study at Johns Hopkins. So it’s still the equivalent of a part-time job, but at least it’s a more fun and rewarding one.

Symptom-wise, the newest issue is that my voice is changing. I talk slower and occasionally drop syllables. It’s harder for me to project in loud places or talk for long periods of time (a problem since I’m typically on the phone for 2-3 hours a day for work).
Daily tasks are also becoming more difficult and frustrating. Getting ready and to work takes me two hours. I can’t carry groceries or anything heavy. Automated phone systems can’t understand me. I have had some spectacularly mortifying (and dangerous) falls in public places: a restaurant, a hotel, the alley side of my building at 6am, into a Metro train, in the middle of the street. As my therapist reminds me, “only you know what it’s like to live with this 24 hours a day.” It’s exhausting. I get so tired of reminding myself to lift my toes with every step, look for every crack in the sidewalk, wait for Ubers to take me to/from 5+ medical appointments a week, ignoring people’s stares…whew. /rant.
Still, I know I’m darn lucky. I work from home most days, my colleagues remain unbelievably supportive, my amazing husband does chores that are hard for me, and we’re going to buy a car to make getting around easier. Without any one of those, life would be much, much harder.

How are we doing?

Well, for starters, it’s more than a little disorienting not know whether to be planning to live for 2-5 years or a normal life expectancy.

I’ve always believed that everything happens for a reason, but this has shaken that to the core. Not broken it though — even though I say seemingly contradictory things like, “look, any of us could get killed crossing the street tomorrow.”

The truth is that good people get killed crossing the street and murderers have intact motor neurons. I don’t know why, but that’s the way it is. Accepting that allows me to sidestep the “why me?” question, which would just lead to a lot of self-pity I don’t need and frees me up to accept some unexpected gifts:

Over the past two months, I’ve reconnected with friends I’d lost contact with, strengthened close friendships, and had deeper conversations with my family than we’ve had in years. To me, this is what life is supposed to be about anyway. If it took this illness to accomplish that, then at least something worthwhile has come out of it. 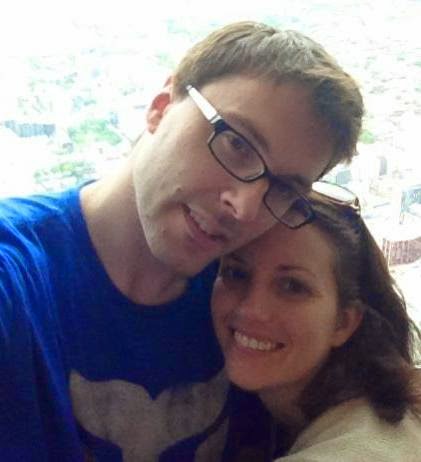 It’s brought DP and I closer together than ever before and taught us to truly value each day we are given. We are each other’s strength, comfort, constant companion, and ongoing source of laughter. There is so much more I could write, but I’ll leave it there. Suffice it to say that I thought he was the most wonderful man ever when I married him, but I had no clue. If this all goes downhill, I’ll still believe I am the luckiest woman on the planet 🙂

There was a point I remember thinking, “I’ll never have another purely happy moment. From now on, the best I can feel is bittersweet.” But the truth is, I actually find the happy moments purer and sweeter than they were before.

While it would be most romantic and uplifting to end on that note…I suspect there are some suspended reality gremlins at work here. If I’m feeling depressed, I can usually prop myself up with “well, maybe it’s just PLS.” But can I hold on to my current attitude if I become bedridden and have to eat through a tube in my throat? I don’t know because I really just can’t imagine.

“It is not the critic who counts; not the man who points out how the strong man stumbles, or where the doer of deeds could have done them better. The credit belongs to the man who is actually in the arena, whose face is marred by dust and sweat and blood; who strives valiantly; who errs, who comes short again and again, because there is no effort without error and shortcoming; but who does actually strive to do the deeds; who knows great enthusiasms, the great devotions; who spends himself in a worthy cause; who at the best knows in the end the triumph of high achievement, and who at the worst, if he fails, at least fails while daring greatly…”


This quote helped me bridge two recurring thoughts that had been at odds in my mind. While I’d like think I’m predisposed to fight and overcome the odds through sheer force of will, that doesn’t seem to give true and due weight to the seriousness of the situation. But just accepting the diagnosis and making peace with the prognosis isn’t something I’m willing to do either.

Which leads to the second quote from Robin Roberts’ Everybody’s Got Something. I haven’t loved this book so far and was honestly kind of skimming when I hit it. She says:

Today, I can walk, talk, work full-time, type, swim, drive, travel, hang out with friends and family, shop, clean, eat, dress myself, pee by myself, breathe by myself. Actually, the only thing I can’t do is run. As much as I miss that, the list snaps it back into perspective. So I will be thankful for what I can do today and I will be brave. That I will promise you 🙂

—-
PS: Notes and messages mean so much to me, but PLEASE don’t be offended if I don’t respond right away. There’s a lot going on..,plus we’re moving next Friday! 🙂
Previous Post
Let’s just say: Things have changed
Next Post
Clarity & Challenges

Thank you for sharing your amazing story! Your heart is all over this page and I love your passion and your honesty! Wishing you and your family the best. Happy 4th of July!

you are an amazing person and Im so glad to be a part of your family…We love you very much!!! Bob, Betsy, Chris, Zach and Nate…..

You are a brave young woman and an inspiration to so many, Andrea. Your discovery of living in the present is very important, and a level of consciousness to which most of us only aspire. As you say, there are blessings borne of hardship that transcend the present life situation. I am thinking of you every day and wish you all the best. Will be checking your blog regularly. CVHO'B

Thinking of you and praying for you and your family. Stay strong!
EEC

I don't think many people will know what it is like to "walk in your shoes", but I wanted to let you know that you are an inspirational person for starting this blog and for your outlook (I noticed the background photo here is a clear day with a few clouds). You are definitely looking at this with clarity and insight and I wanted to let you know that I was thinking about you and hoping for the best. Keep thinking positively!! – Carlton

I am so sorry that you are going through this and I hope that the doctors find some answers for you soon! You are in my prayers!

Andrea my prayers are with you. Your honesty and strength is truly inspirational. I too have read Brene Brown's Daring Greatly … I have found the book very inspiring and motivating! One of the premises for reading this book and one of my fav quotes is: “Vulnerability sounds like truth and feels like courage. Truth and courage aren't always comfortable, but they're never weakness.” Keep staying strong lady … hugs!

[…] members (and I!) are doing, the 9th anniversary of Jon Blais’s death, the two-year mark of my initial diagnosis. So check back often (at least weekly) and I promise not to be so quiet […]