It’s difficult to understate how much things have changed in 7 months except to say this: 7 months ago I did a half Ironman triathlon; now I walk with a cane. 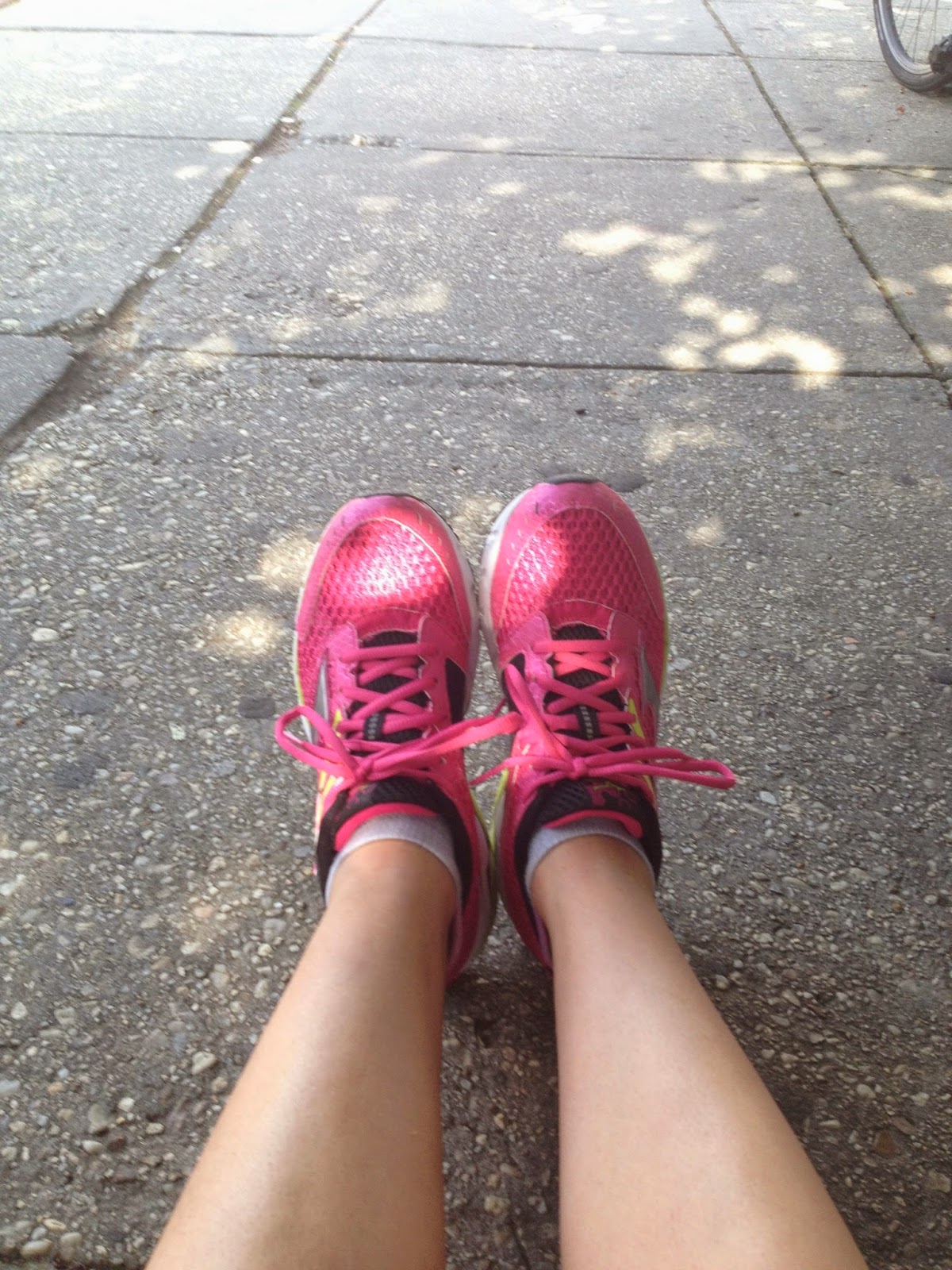 I noticed the symptoms right after the 70.3.  I felt like I couldn’t stretch out my hamstrings.  I started walking on the balls of my feet and toes.  I thought it was because I had been doing so much biking and had switched into my new sweet hot pink mid-foot striker Mizunos ——————————->

This went on for about 6 weeks before I decided to take advantage of a perk for tri club members: a free screening by a physical therapist.  The free one led to a paid-for more thorough one in which the PT videotaped me walking on the treadmill. She put down the camera and wide-eyed agreed that, no, that was not normal.  I was walking like a toddler: feet too wide apart and uneven steps.

This plus muscle weakness in my legs (despite the half Ironman) and the hand spasms I mentioned led her to refer me to a neurologist “just to make sure there’s nothing else going on.”  Although I know she didn’t see where this was headed at the time, I’m eternally grateful she was so sharp and didn’t just brush it off.

Fast forward through 4 neurologists of increasing sub-specialty, including two university hospitals (I’m skimming here but I have been incredibly blessed with great docs) and I’ve had the following done: 5 rounds of blood tests, 4 MRIs, an EMG (a nasty test where they send electric shocks to your nerve endings and then stick needles in your muscles and make you flex), and a spinal tap followed 3 days later by a blood patch to mercifully end the worst headache of my life.  And a CT scan and mammogram for good measure.

What could the doctors determine from all these tests?  Nothing.  Every single test has come back normal.  Turns out I’m healthy…except for the fact that I can’t walk without falling fall a LOT, my legs shake uncontrollably, I drag my right foot, jump at loud noises, can’t clap, have hand spasms, the slowest handwriting on EARTH, and am starting to have trouble pronouncing words clearly.

At this point, the following has been ruled out: MS, ALS, tumors, lyme disease, auto-immune (many of them anyway), vitamin deficiency, early onset Parkinsons, and about 50 other things I’ve never heard of.  Also, Stiff Person Syndrome was ruled out yesterday, which was a working theory for awhile.

All of that is awesome because most of those things would be overwhelmingly scary.

But not having a diagnosis is also scary.  Our lives and life plans have been completely derailed and no one knows why.

Right now, the only thing left on the current list of possibilities is a genetic condition called spinocerebellar ataxia (SCA).  There are at least 60 different types of SCA and they’re still being discovered.  It is odd for a genetic disorder to have symptoms that show up and progress so quickly, but apparently it’s possible that the physical stress of the triathlon and all the training leading up to it impacted how the disease presented itself.

The next step is that my neurologist is trying to get me in to NIH’s Office of Rare Diseases’ Undiagnosed Diseases Program for a full genetic workup.  It takes 6-12 weeks before I hear back whether I’ve been accepted — they only take 50-100 cases per year — followed by a 2-6 month waiting period.  The odds don’t sound good but I am being optimistic because:

If it doesn’t happen, I can do commercial genetic testing which isn’t as good or as thorough but is still “very” expensive according to my doctor, whatever that means.

So for now, I am focused on what I can do through PT.  Hopefully, I’ll also be starting with occupational therapy and speech therapy soon.  There are some top-notch facilities here, but unfortunately, the best costs $600/day with an average treatment of 60 days (do the math…smh).  But they need a diagnosis anyway, soooo…

And in reality, if it does turn out to be SCA, these types of therapies are about the only options available to ease/slow the symptoms.  There are a few experimental treatments, like stem cell therapy in Thailand…sign me up for the beach and the food but not the 4 spinal taps a month, please.

How are we doing?

About as well as you can imagine, but it’s been tough on DP and me.  We had a lot of life plans that are on hold (for years, maybe).  We truly love seeing photos of our friends’ babies and marathons, but it’s still a punch to the gut.  We’re guilty of complaining about first world problems too, but it’s gotten harder to listen to mindless whining.  If you and your family are healthy, be grateful. 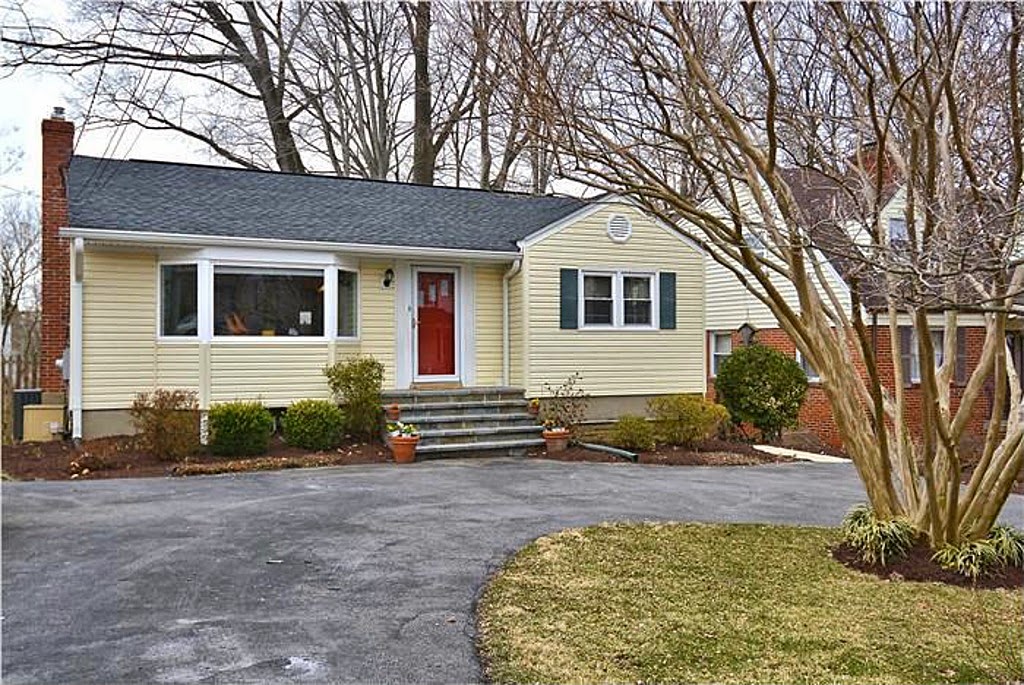 Oh, and in the midst of the crazy, we are buying a house!  It’s a lovely little rambler in Silver Spring that has a main floor master bedroom / bath / kitchen / office / living space / exercise room in case stairs become too difficult for me.  Not exactly the DC rowhouse or cape cod we were initially looking for, but we still love it.  We (I mainly) have watched every HGTV known to man and have sketched out remodeling phases 1, 1A, 2, and 3 if we stay there long enough.  It’s still close enough to walk to Metro, so I’m not a complete city planner sellout but yes, we will have to buy a car.  We’ll have you over sometime 🙂

The look into the state of health care, medicine, and insurance has been eye-opening.  I’ve had great doctors for sure, but the ridiculousness I’ve had to go through to get my own records, keep all the doctors looped, find out test results, get doctors to actually read the results for the tests they ordered (?!), and figure out insurance has seriously become a part-time job on top of my full-time job.  I spend at least 20 hours per week on medical stuff…and remember that no one has actually found anything wrong yet.  The subject alone is worthy of its own blog post.

I also bought a Kindle so I can download memoirs of people who have overcome, or made peace with, disabilities — like Stronger and I Remember Running (highly recommended).  Well, truth be told, I bought those two and then Babysitter’s Club Super Special #1 😉

And I know, I know, I KNOW it’s not the most important thing, but I just want to run so badly it hurts.  It was okay in the winter when it was cold and gross, but now that spring is here and there is seriously a half marathon every weekend in this area, I would do anything to go for a run.  Still, I choose to believe that I will be able to run again someday.  And then I will make shirts that say this:

I run because I can,
When I get tired, I remember those who can’t run.
What they would give to have this simple gift I take for granted
and I run harder for them.
I know they would do the same for me.
~Unknown
Why am I telling you all this?
Honestly, it’s just gotten too awkward not to.  Friends tell me about their new babies and then ask what’s new with me and it hijacks the conversation.  People see me for the first time with the cane and I have to try to condense the last 7 months into a sentence. Planner colleagues don’t understand why I can’t give 110% like I normally do (excluding my co-workers who have graciously taken up my slack without complaining).  If this was going on with anyone I cared about, I would want to know.

I don’t plan to keep this blog up until I have something new to report, so don’t feel like you have to keep checking it.  I’m more than happy to talk about what’s going on, if you want.  Or not, that’s perfectly fine too.  But I just wanted you to know.  In a weird way, I hope it helps you to put something in perspective.  I know I waste a lot of energy on crap that doesn’t matter.  Just be brave, be thankful.  I know I am.

Incredibly eloquent. We love you both so much!!!!!

We will be praying for answers and healing! Thanks so much for sharing!

Andrea, you are amazing. I'll continue to envision your NIH testing genetic goal and with lots of positive energy from everyone, we can make it happen.

Andrea and Dave,
Allison Matlack informed Lauren and I of your condition two nights ago. We just wanted you to know that we are praying for you. Sometimes that seems trite but in all sincerity…it seems after all the doctors cant figure things out we desperately need the Great Physician to give insight and healing in accordance with His plans for you all. So we are praying.

You have always been a strong woman, Andrea! Now more than ever, though, I'm amazed by your strength! God bless you and Dave as y'all continue down this long and arduous road. You'll be in my prayers.

You are amazing. Thank you so much for sharing all this–so honestly and with such a wonderful perspective. Inspiring. Know that you are in our thoughts and prayers. Congratulations on the house! Love, Pinky and Keith