My Arms Will Be Covered In Swallows

I am officially one of the lucky ones. Today is the fifth anniversary of my diagnosis with ALS.

Everyone in the ALS community knows that dreaded “2-5 years life expectancy” phrase – it is shorthand for how brutal this disease is. How fast. How lethal.

That journey is what my husband David and I faced, five years ago today, sitting in a hotel room eating takeout Chinese food after our appointment where we were told I had “probable ALS.” We tried to imagine what lay ahead, but then again, we tried very, VERY hard not to imagine.

Tim LaFollette began the tradition of swallow tattoos in the ALS community in 2009. Tim’s mother and grandmother also had ALS (before it was known the disease could run in families) and Tim copied the swallows from his mother’s hymnal for a tattoo on his forearm. Soon, his friends, calling themselves the Often Awesome Army, began getting swallow tattoos as well.

Even my neurologist (also Tim’s doctor) has a swallow on his hand to remind him to tell patients at least one hopeful thing during their visits. That’s how rare hope in ALS is.

Three years ago when I reached the anniversary of living for two years, we celebrated the milestone with a tattoo of two swallows. I felt like I could finally exhale a sigh of relief I didn’t realize I had been holding. I wasn’t a quick progressor. I had had amazing experiences since my diagnosis. Our friends and family rallied around us. My husband and I were more in love than ever.

So I started my own tradition: a new swallow tattoo for every year living with ALS. Some people dread the anniversary of their diagnosis because it marks the day that everything changed forever, but now it’s something I want desperately. One more year LIVING with ALS.

To be sure, I am not a “typical” ALS patient. At five years out, I can still talk (albeit slurred), walk (albeit with a walker), take care of myself (albeit slowly and with help), and drive. Some things I can do are really extraordinary, like marathons on my recumbent trike.

But then, something else people in the ALS community knows is that there is no “typical” ALS patient. This strange, awful disease affects everyone differently: wildly different symptoms, different rates of progression, different (largely unknown) causes. That is why it is so hard to make progress towards a cure.

But my fifth swallow joins the flock at a time when researchers ARE making progress. AT-1501 out of the freezer and in people, NurOwn is showing some pretty phenomenal results, more trials are underway than ever before. It’s not nearly fast enough, the politics are maddening…but it is HAPPENING.

It is happening thanks to the people with ALS who have gone before us. And thanks to the families who still stay in the fight to honor their loved ones. And the researchers who work tirelessly to wipe out this monster for good.

Today, I am officially one of the lucky ones. With that, I feel comes the responsibility to keep raising awareness and money towards a cure. This is my life’s work: to honor myself, my friends who have died, and all those who have yet to be diagnosed.

One glorious day we will find a cure for ALS…and my arms will be covered in swallows. 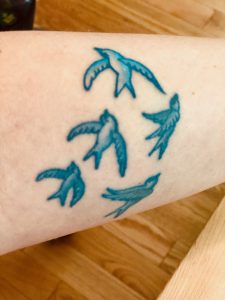