December 7, 2015
Uncategorized
4 Comments
The last post about my tribes brings me back full circle to Team Drea weekend and the City of Oaks marathon, which took place more than a month ago…like Halloween (geez louise).
Fortunately, I had already drafted this post while the details were fresh (before Clearwater, before the clinical trial, before the gala, before Thanksgiving, before Be Brave Be Thankful). Unfortunately, the draft now feels hopelessly stale.
Oh well, it’s a sparklingly beautiful, decently warm day, just like Halloween, so I don’t mind rebuilding the post and reliving the sweetness and fun.
Team Drea Luncheon 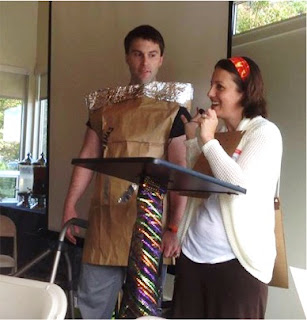 Since so many Team Drea members were coming to Raleigh for the marathon, my parents and I decided to host a pre-race luncheon/ Halloween party as a chance for everyone to meet each other, hang out, and celebrate our awesome year together. This was also my attempt to say thank you to everyone for raising more than $75,000 for ALS research and for creating something so meaningful.
I was a s’more, which took people way too long to guess (hanging chad?? c’mon). DP was a slice of Ashley’s banana bread which goes in all of our care packages. But my graham and his costume kept getting in the way of hugs so they quickly got ditched.
Here were the real costume contest winners:
I put together an icebreaker bingo game, which got everyone mingling by trying to find people who fit categories like “Is an Ironman,” “Did more than 5 events this year,” and “Live/Has lived in Ohio.” All of which fit more people than you might expect.
I also put together a slideshow recapping the year and laying out the vision for Team Drea 2016 (more to come in a future post). I also got the sweetest gift from the team: a framed word cloud of words that they’d use to describe me. I’m happy “badass” made it, but “pain in the ass” didn’t…obviously, DP was consulted on a good day 😉 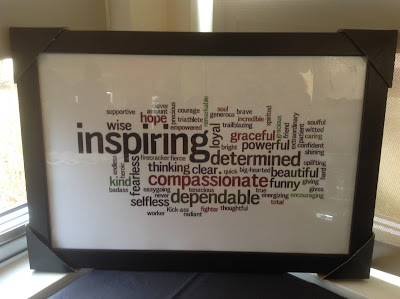 The best gift though was just watching everyone meet and talk – I love these people and think they are all uniquely special and amazing, but they don’t know how uniquely special and amazing each other are. When else does one get this chance to have in one room their friends and family who are otherwise scattered all over the country? It was like a wedding, but without all the stressful pomp & circumstance. 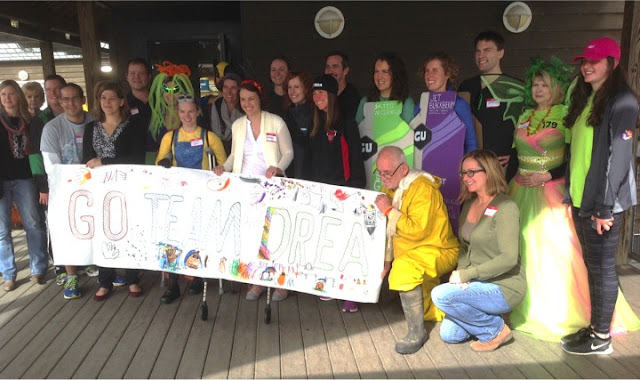 We did have one special ceremony: spreading some of Jon Blais’s ashes on Lake Johnson. It was Jon’s wish that his ashes would be taken to new places and races that he would never see.
In yet another crazy coincidence of small world-ness, Jon’s childhood friend, Greg, joined Team Drea this fall because he works with Jillaine’s husband. He spoke about Jon and the inspiration he’s been to Greg’s life. Jon and Greg did BMX races together back in Rhode Island. Greg was also featured in Endurance Magazine (another crazy coincidence) as a brain cancer survivor and triathlete. Amazingly, Greg had a second surgery just a month before City of Oaks and made our race his short-term recovery goal.
Pro triathlete and coach Carrie McCoy of JustTri also spoke about the inspiration Jon has been for her. She has been supporting the BlazemanFoundation for eight years and two of her triathletes, Kelly and David, did their first Ironman race this year as part of Team Drea.
Greg and Carrie spoke far more eloquently than I could have in this most reverent of ceremonies and I felt his presence as I scattered his ashes in the water. 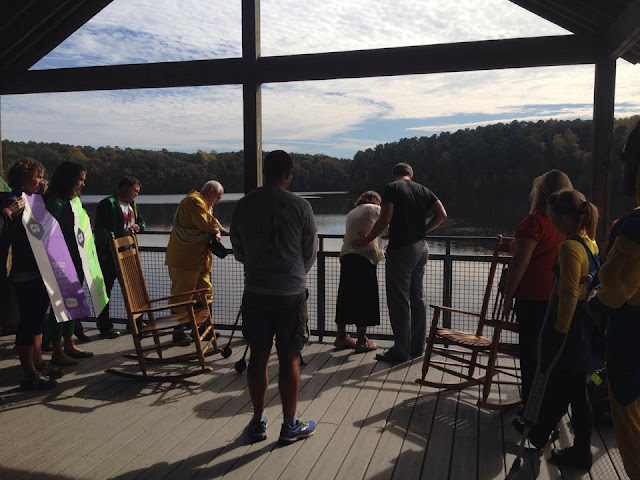 City of Oaks Race Report
At the lunch, I (logically) kept getting the question “are you ready for tomorrow?” To which I replied, “Oh yeah, I kind of forgot about that…” Compared to planning a party for 65 people, a marathon seemed pretty easy peasy J
Even with the time change giving us another hour, DP and I were scrambling to get to the start line…meeting up with our teammates just before the end of the national anthem, and worrying them just a little (oops). 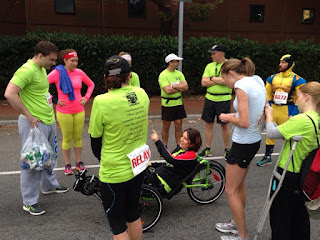 Per the race committee’s instructions for my trike, Team Drea lined up at the back of the race pack. In all, we had 25 people running as part of a relay, or doing the 10k or half marathon. I only had a moment to look around and take in everyone…surreal. Here we go!
At the start, I took off flanked by Relay Leg #1 runners Jodi and Amy, and Melissa who was running the half.  Since we were maintaining a 9:30-10:00/mi pace, we passed a lot of people. Amy summoned her best race director voice and she and Jodi yelled “on your left” constantlyas we cruised along the edge of the pavement. Most people took it in stride once they saw the trike, though I bet we were kind of obnoxious J
I was mostly focused on weaving through the foot traffic and not clipping anyone’s heels, but I relished listening to Jodi and Amy getting to know each other as they ran. Both women have three kids. They’ve both run the Chicago Marathon. Jodi lost her mom to ALS and Amy’s mom passed away five months after her eldest daughter was born. In past races, they both wore pictures of their moms. I love and admire these women so deeply – watching them connect was almost more fun than the ride. Almost. 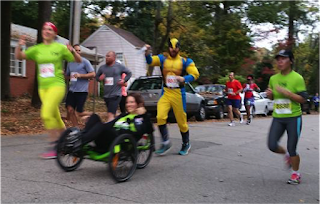 On Leg #2, Jodi’s sister Jillaine and her husband, JonWolverine, stepped in and away we went with Melissa (who was running at least 1:00min/mi faster than she’d planned). Jillaine pulled out what she called her “I’m one of six kids” voice as she cleared the way for me. But it was far easier as the pack thinned out and we fell in with our real pace group before we got to the more narrow greenway section. We said farewell to Melissa as the half marathon course turned off.
I kept flashing back to 2013 when I ran this leg as part of a relay. It was officially my last run ever, when I realized that something really was wrong because I was having to walk the downhills or risk faceplanting over my toes. I allowed myself to feel vindicated. ALS hasn’t beaten me and a year of dedicated work led to back to these woods and this weekend with my friends and family. I’m still me – actually, I’m a better me. It took a lot of courage to get to this day, but this, this was just plain fun.
At the same time, I’m beyond thankful for my slow progression. My race was dedicated to Lisa, also a runner, who died in May from ALS after only a year of diagnosis, two years of marriage, and only two days after her 32nd birthday. In the months before she died, she asked her mom to take care of me, bringing the whole feisty, fun, and fiercely loyal McMillen clan into our lives for which I will be forever grateful. 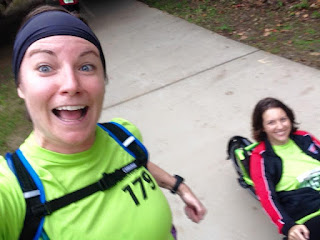 On Leg #3, I reunited with Carrie, one of my best friends from middle and high school. I’m so proud of her — not only did she do a ridiculously hard ninja obstacle 5k course (her first race ever) earlier this year, she discovered by working with a nutritionist that she has a gluten sensitivity and now she feels better physically than she has in a long time. She also now has a trainer and worked up to this 5-mile segment. I made her run in front of me to set the pace and walk when she needed to…but she didn’t need to. She may profess still not to like running, but not gonna lie, I again felt a wee bit vindicated J

I’d hoped to run this leg with my matron-of-honor, Cathy, too but her speedy husband Will ran the first two legs too fast for me to catch up!

On Leg #4, Julie swapped in for Carrie. Here we ran into one little problem. DP’s relay partner hadn’t come in yet. He waved us on and we promised to go slow, a move I began to feel more and more guilty about with each pedal stroke. There is no way DP would everhave left me. So we took a break at the next porta-potty – not gonna lie, that qualifies as a race highlight because I had stopped drinking water awhile ago to take mercy on my peanut-sized bladder.

Eventually, DP caught up to us and of course, he’d sprinted for like 2 miles. Just in time for the uphills (the flip side of the downhills in Leg #2). He had to push me more than when Julie and I did our practice run a couple of weeks before…but it was Mile 22 after all. Sorry, DP:-/
As we exited the greenway, what had started out as “oh how nice, a refreshing mist” had turned into rain.Doug (with Ella in the stroller) caught up to us and was trying to get me to sprint to the finish. But we were already pushing Julie’s pace and obviously, that girl would never leave me. So I cruised along, content.
EVERYONE joined us for the last quarter mile. They’d all been hanging out at Bruegger’s (be still my heart!) waiting for us. So the sea of Team Drea crossed the finish line together. Loved it!!
My official time, in case you care (I don’t) was: 4:53:43. We even got some press coverage 🙂
I want to thank everyone from Team Drea for racing with me, many of whom traveled across states to be there. Also my aunt, uncle, cousins, bitty on her crutches, my mom’s co-workers from Coldwell Banker HPW, and all of our friends who came to watch. This was a very special weekend for me, but would have been just another ride without you! Let’s do it again soon, shall we?? 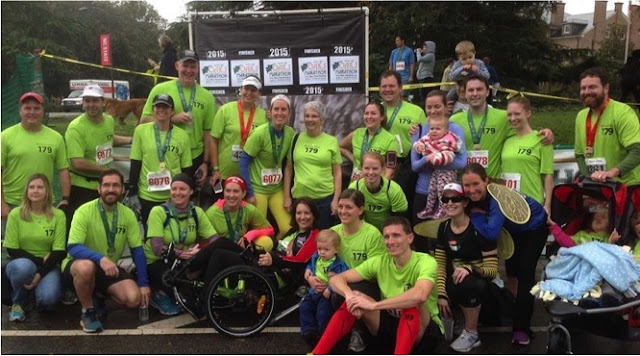 Such a great day! LOVED being a part of the best team ever!

what a special day and I was beyond THRILLED to be a part of it and meet all the wonderful people who have joined Team Drea – and yes, I LOVED getting to know Jodi….it was very special to be part of that first leg with her and you! xo
ps beautifully written – as always!

You have shared amazing pictures of ceremony here dear. All of you seems so happy. I am also feeling great to know about Greg here on your blog. Hey I want to invite you all for my event at Los Angeles venues. Will you be able to come? Please confirm me!!