July 27, 2015
Uncategorized
2 Comments
Not every 5k race report begins with a trip to the ALS clinic, but that’s where our race weekend started.
We were there for FIVE hours, instead of the usual 3+, because I had a date with the pulmonologist for some breathing testing – 93%, which is excellent!
Actually, all the news this time was excellent. Turns out it just took me complaining about my last clinic appointment to make the universe and Facebook friends rally around us. My neurologist said my muscle strength has stayed consistent for the past 6 months (which is when I started seeing her), leading her to tentatively conclude that I have may have slow-moving disease. She is also going to recommend me for an upcoming Phase III trial of tirasemtiv– not a cure for ALS, but a “skeletal muscle activator” (read: lungs, breathing). The great thing about a Phase III trial is that so far there have been promising results and no one gets the placebo. I had all but given up on clinical trials until this one fell in my lap. It doesn’t get any better than that!
The ice bucket challenge funded this trial. Fundraising matters. Research matters. Get your buckets ready!
We then embarked on our eight-hour drive to Rhode Island. Up I-95. In rush hour traffic. On a Friday. In the summer. Ugh. The best laugh we got was a photo text from DP’s aunt who had already arrived at our B&B with her son, Will – the picture? Will sitting in the hot tub in their room watching the Red Sox, clicker in hand. It doesn’t get better than that when you’re 11…maybe ever.
We ate our way through Saturday – breakfast by the pool, lunch with Jon’s parents at THE fanciest B&B ever, back to poolside for dinner consisting of pizza, wine, and s’mores. 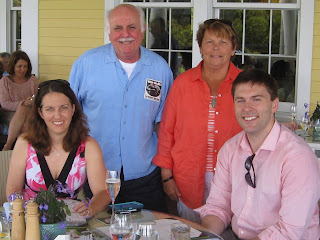 This was the first time we had met Jon “Blazeman” Blais‘ parents, Bob and Mary Ann, in person, even though we’ve kept up a running email conversation for almost a year. I think the waitress came by six times before we finally ordered, we had so much to discuss. It was such a special occasion – sitting on the breezy verandah overlooking the ocean (and Taylor Swift’s house) talking about Jon, his convictions, and his vision for the Blazeman Foundation. We talked a lot too, but the conversation always drifted back to Jon. He was omnipresent, even ten years after his incredible Kona achievement and eight years after his death. Love for their son keeps Bob and Mary Ann going – everything they do is singularly focused on carrying on his mission as purely as they can.

When we arrived at the race site on Sunday morning, Bob immediately pulled me aside to ask if I would be willing to spread some of Jon’s ashes before the race started. It is a ritual that has been repeated countless times. Jon wanted his ashes spread at triathlons, races, and picturesque places he would never see. This was the inaugural Blazeman Run at the stately Aldrich Mansion set atop a hill overlooking the sparkling Narragansett Bay. This qualified. Besides, I was wearing bib #179.
So of course I said yes to this profound honor, but inside, I was rattled. Always the most squeamish kid in biology, I was not at all sure how I’d do handling human remains. More than that, I was not at all sure how I’d handle staring at my own mortality. 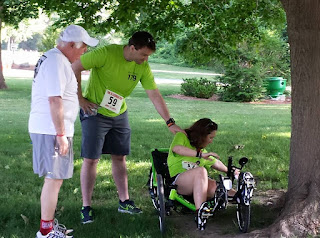 But I faced my fears – or more accurately, stuffed them down as far as they would go and triked with DP and Bob up to the beautiful, enormous pin oak at the start/finish line of the race. Bob’s voice boomed aloud with the invocation, but I could hear Jon’s New England accent in my head: “The decision must be instant…the commitment must be total.” Okay, I thought. For you, I will do this.
Afterwards, the small group of runners and spectators turned around to the start line. I hung back in the starting pack with Heather (who floored me with her last minute decision to fly up!), DP, and Will. The horn sounded and off we went.
We pitched down the steep hill towards the water, followed by a slow, grinding uphill around the mansion to make it back to the top. The driveway hasn’t been paved in awhile and I had a hard time navigating the loose asphalt and deep ruts. I don’t know if I can do this, I thought.  Immediately, Jon popped into my head. If he can do an Ironman, I can do this dumb hill. So with a push from DP, I regained my momentum and slogged my way up. 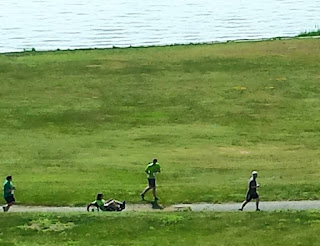 After that, it was smooth sailing for me. But it was all sorts of sticky humid, even though the temperature was in the 80s. DP was sweating buckets. He half-offered to finish the 5k with me but Coach Drea would have none of that. Off he turned to loop through the neighborhood on the 10k course. 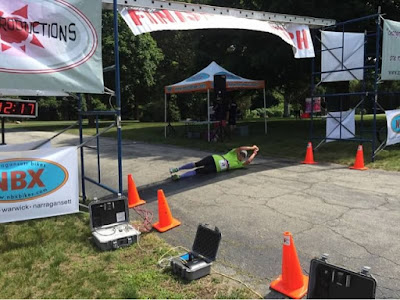 Will and I crossed the finish line of the 5k at about the same time. I took some water and parked by the finish line and cheered other racers in. DP came in and then Heather pulled off a beautiful Blazeman roll ——–>
We retreated back to the shade of the pin oak for the awards ceremony, mostly because we were waiting for Bob and Mary Ann to finish up and join us for brunch. We got to meet many of the Blazeman supporters that we see online, which was really nice.
All of a sudden, we heard the announcer…Will WON 1st in the 12 and under age group. He bounced up to the podium, beaming. 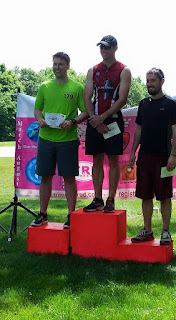 We were chatting with Heather when we heard DP’s name called. Whaaaat? 2nd place in his AG for the 10k! Way to go!
[He says: Look at the podium – the guy in 1st has no spare ounce of fat in his racing singlet. The guy in 3rd was pushing a stroller. I guess, in that field, 2nd is about right. I say: a podium is a podium, killa! Man, you have a great coach!!]
For the record, I came in 1st in my AG but they didn’t call my name. Probably something about using wheels. Or maybe they just realized my trike wouldn’t fit on top of the podium 😉

Afterwards, we headed to brunch with quite a group: Mary Ann, Bob, DP, me, Will, Heather, DP’s aunts Polly and Pinky, Uncle Keith, my first cousin Kim and her husband Craig. It was a fun, comfortable atmosphere of fellowship, even though most people were meeting for the first time. I was struck by how vividly Jon’s legacy endures – creating friendship and memories far outlasting his lifetime.

Thank you to everyone who came out to support us and made the weekend so memorable. Thanks also to everyone who donated to the Blazeman Foundation in support of Polly and Will. Our youngest Team Drea member raised the most money so far for ALS research: $7,582!

What an amazing weekend!