July 18, 2015
Uncategorized
2 Comments
Two weeks after Lisa died in May, I got my first chance to represent as a Young Faces of ALS ambassador for ALS-TDI. I got an email asking if there was any way I could speak at an Augie’s Quest event…tomorrow.
Augie’s Quest was started by Augie Nieto. If you’ve been to a gym – ever – you probably know his work. He is the co-founder of the LifeFitness brand of gym equipment. So next time you’re working out on one of those weight machines and desperately in need of something to take your mind off all the iron you’re pumping, check out the brand of your fitness equipment and thank Augie for making you sweat J
Augie was diagnosed with ALS in 2005 (ahem, 10 years ago…I love reading about people busting the 2-5 year life expectancy) and remains active as Chairman of the Board of Directors for ALS-TDI. To date, Augie’s Quest has raised $45 million for ALS research.
I didn’t know any of this when I said yes to speaking at the Augie’s Quest event. I was just asked if I could share my ALS story at a silent auction/cocktail fundraiser/rooftop pool party at the Navy Yard VIDA gym…tomorrow. Sure, I said, send me the details.
DP and I were in the car on the way to VIDA when I realized the date. May 29th. One year to the day since I was diagnosed with probable ALS the first time, yet none of us really understood what that meant.
A year ago, I was rushing around from doctor to doctor, test to test, trying to hold down a full-time job and falling in the middle of the street. One year later, I was in a cocktail dress on the way to a speaking event about being diagnosed with a terminal disease, supported by a Team Drea army of 70+ people swimming, biking, running, and fundraising for ALS research. So much can happen in a year.
[Side bar funny story: In the parking deck of the gym, we made our usual beeline for the handicapped parking space. Hey, with all the sh*ttiness that comes with ALS, the ONEperk in trying to get around is parking close to the entrance/elevator. DP starts to pull into the space with the blue and white wheelchair symbol and we notice a sign – VAN PARKING ONLY. Whaaat?? It cracked me up…it’s like we discovered there was a Platinum level in the disability rewards club and we’re only at the Gold level. JSo DP backed out and moved to another space. Trust me, we are in no hurry to upgrade our membership!]
Anyway, we took the elevator up to the gym level and met our point of contact, Aaron, who is the director of operations for VIDA. Super nice guy. As we made our way to the penthouse level with the rooftop pool, he filled us in on who Augie is and how VIDA fundraises for Augie’s Quest to benefit ALS-TDI.
We stood around for a few minutes, declining drinks and trying not to be nervous (why oh why do I say no to alcohol before speaking engagements? In the future, don’t ask me, just hand me the drink!) 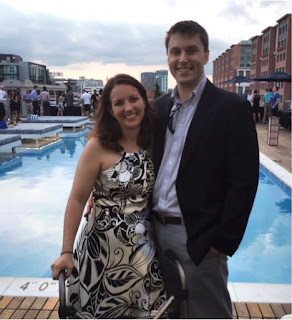 I was struck by the atmosphere – these are mostly our peers, or at least they used to be. Fit, thirty-something professionals in DC with no kids, kicking off a gorgeous late-spring weekend by letting loose after a long grinding week at the office. Yeah, we know. We used to be part of this tribe too, until ALS came along and derailed our promising, aspirational lives.

That’s what on my mind when the deejay handed me the mic. I told my story, including the fact that it’s the one-year anniversary of when I was diagnosed. Here was may basic message if you don’t want to watch the 5-minute video: We were just like you. I was a triathlete who had completed a 70.3-mile half Ironman. We had just bought a house and were looking to start a family. Now we are trying to wrap our heads around the fact that I have a 2-5 year life expectancy, and that before I die, I will lose the ability to move my arms and legs, swallow, eat, and breathe on my own. Instead of trying to plan for a baby, we are trying to decide whether it’s worth it to spend $80,000-$125,000 to remodel our house so I can get into it and use the bathroom. ALS can strike anyone at any time and we’re really playing catch up with research for this disease, since the only treatment available is one drug that extends life expectancy 2-3 months. Finding a cure through research is the only way we can find a cure to save lives. Boom. Cue awkward hand wave to open the silent auction.

There’s no equivalent of hearing a pin drop on a rooftop, but the background talking dies down in the video so I think the message hit home. I hope it did. Post-ice bucket challenge and being surrounded by this disease all the time, I forget that some people still don’t know how awful ALS is.
As we walked around looking at the very awesome silent auction items (a trip to Mexico, an iPad, box seats at a Nationals game, etc), a lot of people came up to us and asked questions and thanked us for sharing our story – like Tommy McFly and Kelly Collis from The Tommy Showon 94.7FM, who did an ice bucket challenge later in the evening. When they got the mic, they made some truly heartfelt comments about remembering the true reason for the event. We really appreciated that.

We couldn’t stay too late – for one thing, we wanted to do our own dinner date to toast to one year living with ALS. For another, we had to leave the house at 6:30am the next morning for me to catch a flight to Raleigh to cheer on Team Drea Challengers Heather and David at the Raleigh Ironman 70.3.

The silent auction and event sales raised $27,000 for ALS research at ALS-TDI. Thank you VIDA, everyone who donated items, and everyone who came!

The other exciting thing to come out of this event is that I am now back at VIDA, training for a repeat of the Ramblin’ Rose Chapel Hill triathlon in October. I used to be a VIDA Chinatown member until we moved out to the ‘burbs. But after I scoured Silver Spring for a gym with an endless pool (think “swimming treadmill”) with no luck, I asked Aaron if I could try out the pool at VIDA again. Now DP and I are both hooked up with memberships and I couldn’t be happier. 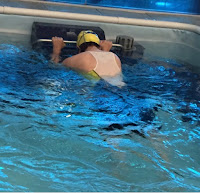 An endless pool is perfect for me. For one thing, the water flow is adjustable so I can find the right speed to swim against. Also, the little bar at the head of the pool (where the water comes out) is an absolute game changer. I can hold onto it and practice kicking. I can run (me! RUN!!) against the resistance of the water and not worry about falling. Since I’m just getting started with swimming again and my endurance isn’t that strong, the bar helps extend my workout by at least 20 minutes.
But below the surface of the water is where the real treasure is, for any swimmer. There is a MIRROR on the floor of the pool so you can watch your form. This is GENIUS. I am obsessed with it.
For the life of me, I can’t figure out why the endless pool is never busy, but I will happily reserve it each and every time I can get to the gym. Thanks VIDA! You turned my dream of doing another triathlon into a realistic possibility and I am so very grateful!
Previous Post
Team Drea Challenge Guest Post #4 – by Carissa
Next Post
Race Report: The Blazeman Run

Wow, what a great event! Thank you for sharing the swimming pool pic, it looks awesome.

Andrea, thank you so much for sharing your experience with us at our silent auction event, and for sharing such a wonderful recap of it here! You are an amazing writer 🙂 we wish you the best of luck and hope you'll come see us again soon!