I should have known better than to have promised three blog posts in one week. I’m just so busy these days. The more time passed, the more I felt guilty about being behind, and the more I procrastinated on it. But I have missed my blog and I have had such a crazy (…gulp…) six weeks that I’m back at it. So hello! 🙂

Celebration of Andrea
The day after Lisa died, we headed down to Raleigh, where my friends from high school Krista and Demetri (now married) put together a “Celebration of Andrea” potluck. They invited everyone who still lives in the area and was in our band friend group. We were a tight-knit bunch and though there were many friends missing because they’re scattered around the country, it was great to see and catch up with the folks who came. It was especially fun to meet all of the significant others, the kids (so many kids!), and to hear about what interesting careers everyone has gotten into.
What I like about catching up with friends you haven’t seen in years is that it forces you to take a step back from your life and try to summarize it into a few vignettes that are most important. While that could feel shallow to some, I find that it puts those day-to-day annoyances that we all deal with back into perspective. Hopefully, you’re not going to waste time complaining about that co-worker who drives you crazy all day, you’re going to talk about the job and career itself — how you got there, why you like it or what you’re hoping it leads to. And it reminds you of how (and how much) you’ve changed since high school. 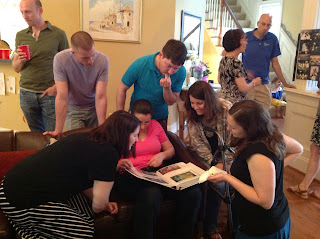 I was also happy that it felt so comfortable seeing everyone again. There were scrapbooks and posters with photos from marching band which led to a lot of laughs about dorky haircuts, even dorkier glasses, and how young we all looked.
Of course, I was thinking about Lisa. Lots of her friends posted those types of photos on her FB wall since she died and I kept thinking, “man, such a shame Lisa can’t see this!” So I was extra grateful my friends had put this shindig together so I could be there to laugh with them. 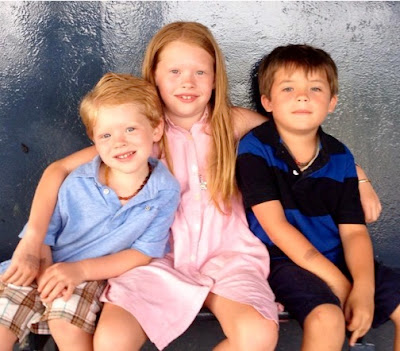 I have to mention one poignant moment that melted both DP and me. My friend Stacy has three BEAUTIFUL kids
<———–

and was telling them about me before the party. Her 6-year-old, Rhys, had been scampering in and out of the house with the other kids, but stopped when he saw me and came right up to us:

Me [looking at DP for help]: Ummm… (how do I explain motor neurons to a 6yo?!)
DP [squatting to eye-level]: Well, she has ALS.
R: What’s ALS?
DP: Well, it means that it’s hard for her to move her muscles and do things like walk around.
R: I know about ALS but I never met anyone with ALS.
Me [not really necessary to squat ;P]: Well, now you know me. Okay?
R: Okay. [scampers off]

It was just so innocent and sweet. I’ve heard from Stacy that her kids continue to pray for us every night and Rhys wants to become a doctor so he can find a cure for ALS (not involving a shot, of course, lol). Man, empathy…you’re a good mama, Stacy!

I’ve kept up the re-connection with several of the friends I saw that day. Moreover, several of them have kept in touch with each other, all of which makes me happy. Everyone’s busy and has friends all over, but when we have the opportunity to remind each other that we still care, it’s so worth it.
Finally, I want to say a HUGE thank you to everyone who came to the potluck, Krista and Demetri for hosting, and all those who contributed to such generous gifts for DP and me.  Please do not think that my tardiness in posting this reflects how grateful we were, and are. 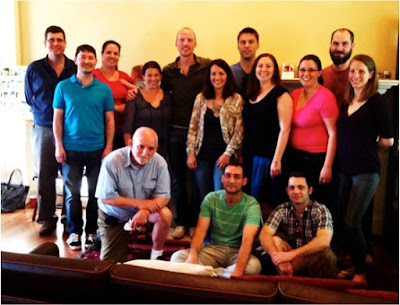 The next morning, we were up WAY too early to see Julie, Heather, and a few SBM friends in the Ramblin’ Rose Raleigh triathlon. I was a little apprehensive because this was my first race as a spectator rather than a competitor, but it turned out to be just as fun…in a different way.

DP and I missed Julie before the race because we were sneakily putting signs up on the bike course…many of which our friends had made at the potluck the day before:

But we met up with several Team Drea Challengers, including my parents, Julie’s parents, Linda, Shannon and her daughters (oh the cuteness!): 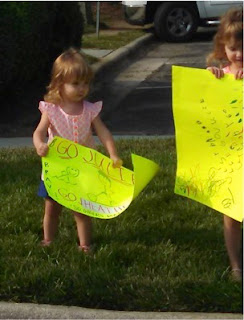 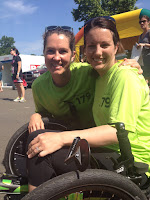 And Jillaine. DP and I had just met Jillaine in person the week before — her mom died of ALS six years ago and she and her sister Jodi ran a marathon in her honor.  This year, they’re running the Navy Half Marathon in September (and staying with us, squeee!!) ————–>

Also, Amy, the race director from Ramblin’ Rose Chapel Hill, and her daughter, Julia, hung out with us — they have both become friends of ours so it was great to see them as well.

Basically, I didn’t even have time to miss not being out there, such a reunion we had in between cheerings as Julie and Heather biked or ran past.

After the race, we headed to the Sawmill Tap Room…all 25 of us. It was fun getting to introduce friends and family to one another and talk with SBMs I mainly know from FB.

And I FINALLY got to meet Heather in person who has taken the Team Drea Challenge to heart and become such a close friend.  She wrote a much more eloquent race report than I just did.  This part, in particular, I LOVE:

“At one point I caught Andrea watching her husband as he left the restaurant for a bit.  The only way I can describe her eyes is “love.”  I know that love, because I feel that way, too, when I watch my own husband sometimes.  She loves him so much – Andrea loves all her family and friends with every bit of her soul.  She loves this crazy world so much – she wants to make it a better place.  And that is one of the many qualities about her I am thankful for.  Her “love,” her honest caring, is what inspires me to want to keep on doing all the things – to never quit.”

You said it, my friend.  We may have only just met each other, but you know me so very well.

I cannot believe that one year ago today I shared my half diagnosis of probable ALS (which was really a real diagnosis, but we didn’t understand what the neurologist was telling us at the time). It seems like ages ago, thinking back on all the amazing adventures I have had since then — moving to our new house, getting diagnosed with ALS (again), getting a trike, getting a kitten, Ramblin’ Rose Chapel Hill, the Walk to Defeat ALS, the magazine cover, starting the Team Drea Challenge, going to Turks & Caicos, the Coastal Delaware half marathon, the great driver’s license debacle, a hot air balloon ride, meeting Jon’s mom & dad…

It has been an incredible year and I am JUST as excited about the year to come. I just want to say thank you from the very core of my soul to everyone who has been there for us. We are so very blessed.

On the 76th anniversary of Lou Gehrig’s famous speech, let me echo his immortal words:

“Today, I consider myself the luckiest man on the face of the earth. And I might have been given a bad break, but I’ve got an awful lot to live for.”

Andrea…Bob and I are blessed to know you and DP…and reading your blog so reminds us of our journey through ALS…
Love,
Mary Ann and Bob,
Jon's mom and dad

I agree with Mary Ann. I know I tell you often, but you have changed my life in so many ways. There is so much in this world to be celebrated, to be appreciated. Much love to you today and always. Love, Heather

Inspirational as always, Andrea! Can't get enough of your posts 🙂