This is Part 2 of my week last week. Catch up on Part 1 here. Part 3 coming shortly…

A Tribute to Lisa McMillen
In November 2014, I asked the ALSA caseworker at the ALS clinic if there was a support group in the area for young pALS. I have since formed bonds with pALS of all ages, but was (and am) stuck on this idea that DP and I are in such a different place in our lives with this disease — e.g. while many pALS are grieving the idea of not being around to watch their grandkids grow up, we are grieving that having kids is no longer part of our life’s plan.
“No,” she said. “But there is a young woman in Arlington who you should meet.”
That turned out to be Lisa. I knew we would be friends when her first email reply came back immediately and had as many exclamation points as I use 🙂
Lisa was diagnosed with ALS in April 2014, just before her 31st birthday and less than a year after getting married. She thought my diagnosis roller coaster was worse, I thought hers was. She had her second “stroke”(maybe? some doubt considering what transpired afterwards…) in August 2013. Following a long hospital stay and bathroom remodel (keep in mind she and Sean were still basically newlyweds), her symptoms seemed to be getting worse. So a lot of medical head scratching went on (aka tests with needles and electrodes) and she finally got the diagnosis.
In her first email, Lisa invited us over to her house so that we could see some of her “gadgets” (her term). We discovered all sorts of similarities in our husbands: attorneys…from outside Philly…rowed in college…then triathletes… But the most important similarity is that Sean looked at Lisa the way that DP looks at me. Like he would do anything for her. And did.
What struck me about Lisa was that she was so practical and matter-of-fact about everything. For example, she had a feeding tube put in WAY before she needed it because she knew her body was at its strongest.
Also, she was fearless. Even after the hospital stay, she was still working her beloved job at the GAO and taking the Metro in her power chair…at rush hour…on the Orange line.
I give Lisa a lot of credit for how I’ve been able to deal with ALS so well. It’s hard to whine and complain when this little spitfire is nonchalantly driving in circles around you. “Have you signed up for hospice? You should, they’re great.”
That’s why I was so surprised when I was so sad to learn about her passing on Friday. We all knew it was inevitable, and I’d heard at the ALSA conference that she wasn’t doing well. I reached out over text but it was her and her twin sister Kat’s 32nd birthday so I figured she was celebrating and responding to an onslaught of birthday messages.
I was so sad and really mad for the first time. Mad that so little has been done to stop this killer. It’s funny, just a few days before, I’d just spent hours surrounded by hundreds of pALS listening to explanations of why ALS researchers haven’t made more progress. I was discouraged, but I wasn’t viscerally sad or mad like this. That beautiful flower got picked just as she was blooming.
(By the way, I take exception to the notion that Lisa “lost her battle to ALS.” We may have lost her in this world but ALS never beat her spirit, spunkiness, or sweet smile. She wins in my book.)
Selfishly, my reaction scared me and caused me to question everything. Here I am, inviting people to be part of my journey, to get excited and be inspired, connect and reconnect, to have all these adventures…only to make them more sad at the end?? It crushed me. 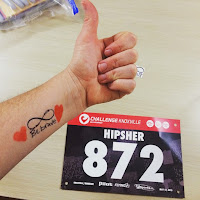 Of course, the Team Drea Challengers rallied. I asked them to dedicate a lap or mile to Lisa and immediately got back messages like, “I’m lacing up my shoes right now” and “we’re planting marigolds and we’ll plant some in her honor like we did for my grandmother” and “my 4+ hours on the bike tomorrow will be dedicated to Lisa.” Lauran and Heather honored her in their race reports and Shaw added some hearts for Lisa to her temp tattoo.
Jodi, a Team Drea Challenger whose mom died of ALS 6 years ago, told me that it was okay that it was not okay. Being “not okay” has driven her to keep her mom’s spirit alive in telling her kids about their grandmother and to see so much of her mom in herself as she raises them. Being not okay is why she and her sister Jillaine ran their first marathon last year to money for ALS and joined Team Drea. Their mom’s passing hurt the family deeply, but it challenged them to honor and remember her.
YFALS
Ironically, on Friday I also had a call scheduled with the folks at ALS TDI about becoming a Young Faces of ALS (YFALS) ambassador to raise money and awareness of ALS in younger people. You may have seen Anthony Carbajal on Ellen or read Sarah Coglianese’s beautifully written blog already — they are both YFALS.
This does not in any way change my commitment to the Blazeman Foundation. ALS TDI shares a similar mission focused solely on research — they are a Boston-based nonprofit biotech company that works at the preclinical phase to develop new treatments to slow or stop ALS. Promising findings are sold to pharmaceutical companies that can run the trials and bring drugs to market.
Some people remember that DP and I dodged two snowstorms and the Patriots’ Superbowl parade to get to ALS TDI in February. I am participating in their Precision Medicine Program, which means my blood sample and skin biopsy will be used to look for ALS biomarkers and develop stem cells that can be tested with thousands of already approved drugs to see if they can be used for ALS. Every month, I wear 4 motion sensors for a week to measure the activity of my limbs and do a voice recording. This data helps ALS TDI researchers track the progression of my disease.
It seems like too much of a coincidence that I had a meeting about becoming a YFALS on the same day that Lisa died. So I will take this role on in her honor, telling her story as well as mine, and challenging myself to raise MORE money and awareness in this new channel.
And ironically too, maybe I’ve finally found the support system of younger pALS that I was looking for.
Previous Post
The State of ALS (Oh geez.)
Next Post
Long Live Part 3!

You've honored her Andrea! Thank you for sharing.

So proud to have you on the YFALS Team. You're making a huge impact!

[…] learned from a couple of key people who have now passed away. Jon Blais, of course, and my friend Lisa McMillen. Today is Lisa (and her twin sister, Kat’s) birthday so it seemed like the right day to post the […]

[…] are a lot of important dates within May — my friend Lisa’s birthday, the anniversary of her death, Ramblin’ Rose Raleigh triathlon which a bunch of Team Drea members (and I!) are doing, the […]