May 6, 2015
Uncategorized
8 Comments
To date, Team Drea has raised:
$32,112 for the Blazeman Foundation
+
$2,888 for the ALS Association
=
$35,000 dedicated to finding a cure for ALS and caring for those with it.
Thank you.
———————————————————————————
Okay, I admit it. I just donated $19 so we could hit that number 🙂 Can you believe it?!?!
About a month ago, my friend Carissa was training for her first half marathon for the Team Drea Challenge (which she also did on Sunday! So proud! Guest post forthcoming…) and we decided to see if I could keep up with her on an 8 mile run.  I did, it was fine, and so we made a fun weekly date out of it with progressively longer distances, all the way to 10.
I’ve also been triking with my speedster friend, Ashley, and DP on various runs this spring for shorter distances at slightly faster paces and those went okay too.

So about two weeks ago, Ashley and I signed up for the Coastal Delaware Half Marathon. We chose strategically: flat, not too big, not too far away timewise or distance wise. But the main criteria was FLAT. And would accept a trike, which the CoDel graciously did. DP signed up for the 9k and Ashley’s husband, Doug, graciously agreed to take photos and take care of their kids.

Pre-Race:
2:30pm Saturday: DP gets exasperated when my iPhone directions tell him to make a U-turn…for the third time. I am cracking up too hard to tell him he turned early…again 😉
3pm: Packet pickup opens and the first table we see has a TRIKE on display. So we go over and learn about Preston’s March for Energy. Preston’s mom, Deb, tells us that Preston has Mitochondrial Disease, which leads to low muscle tone and developmental delays. They received a donated adaptive bike in 2011 and pledged to pay it forward by raising money for other children with disabilities to have bikes of their own. I love this.
We also meet the race director, Rick, who couldn’t be nicer and says, “anything you need, let me know.” Perfect, thank you! I think of Amy, the RD at Ramblin’ Rose Chapel Hill who promised me she’d put the medal around my neck no matter what time I came in… 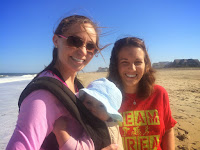 4pm: DP, Ashley, her 11mo daughter, and I take a slowwww walk on the beach. I try out my trekking poles, which goes okay but they sink in the sand. One fall (oh, I love how forgiving sand is!) and a sneak attack by a wave, but it’s always worth it to see the ocean. 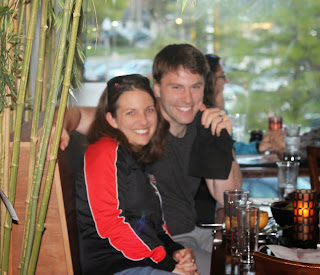 6pm: Protein/carb dinner, Asian-style. There’s a live band, which mesmerizes Ashley and Doug’s 3yo son. He stood in front of them long enough that a band member gave him drumsticks and he beat on the stage right along with the music. It was both hilarious and heartwarming to watch 🙂

3am: Wake up happy that I actually had a good night’s sleep before a race…only to realize I have 3 hours left before the alarm. I’m too excited to sleep.

6am: Bounce out of bed knowing how long it takes me to do anything, then realize how easy running races are to get ready for compared to triathlons. Am sitting around by 6:20. Ashley comes over and double french braids my hair and we’re off.

Good thing we left when we did! It’s more than a mile to the race start. I love hearing the blaring pop music…it’s just one of those mainstays of every race. Once we get there, we only have time to grab more pins, take a couple of photos, and then RD Rick says it’s time to start. They’re launching Deb, Preston, Ashley, and me first. 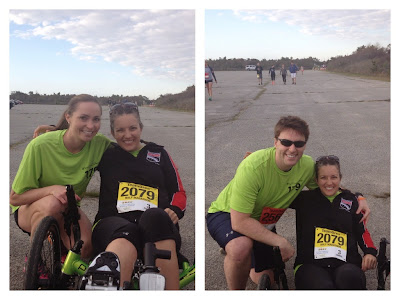 The thing about starting in the front is that you’re inevitably going to be passed…a lot. It didn’t matter though. We race alongside Preston and Deb for awhile, getting to know them and listening to Preston’s music. We cheer on the leaders as they pass us, but when the pacer packs start catching up, Ashley and I pull ahead so we’re not too wide abreast. 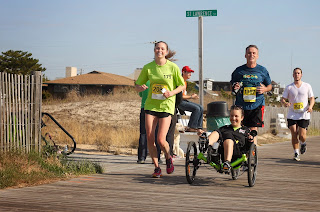 The morning is as beautiful as coastal Delaware is flat.  I’m so grateful for both and as the miles pass, I gain more confidence that I can sustain our pace, which Ashley tells me is around 9min/mi. We’re both kind of surprised and keep checking in with each other — “are you okay?” Ashley doesn’t want me to overdo it and I don’t want to ruin her 5k next weekend…she’s a rockstar runner but hasn’t been training for a long distance race. Mutually reassured, we keep going.

A couple of people (like my mom) asked what I think about during races. Of course, I thought of Jon Blais, the Team Drea Challengers, and how DP was doing in his 9k, but I wasn’t overly reflective this time — I was just grateful. I didn’t have to think about being grateful, I just was. With my whole being. I wasn’t struggling, I wasn’t worried, I was just having fun feeling like a normal competitor once again. The longer we’re out there, the more I realized how much strength I have left. And believe me, I am grateful for that. 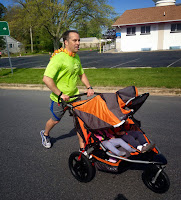 Around mile 9, Doug joins us with the double jogging stroller. Poor Otto wanted his mama so badly and couldn’t understand why Ashley wouldn’t stop running and pick him up! I know she was torn, but I thought it was too sweet.

With less than two miles left, Ashley takes over the pacing and we step it up. We are limited to the shoulder of the road though so Ashley started clearing the way — “on your left, bike coming through!”

Barreling down the finish chute at full speed and seeing DP (surprised to see us already!), I am just happy. Wholeheartedly happy. 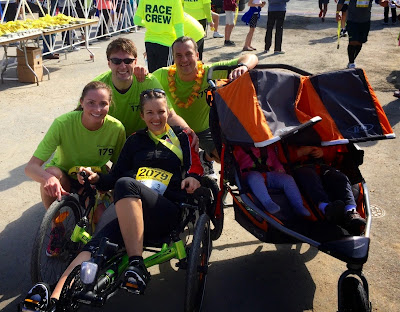 No doubt, the best part about racing is the brunch afterwards. We showered and headed out to Rehoboth Beach to try to escape the rest of the runners. Yelp led us to a great down home kind of place where we didn’t see anyone who looked like they had just come from the CoDel. The food and the coffee (cofffeeeeee!) were fast, delicious, and definitely hit the spot.

DP also had a great run. He was using the Garmin for the first time in a race and it kept him from going out too fast. The 9k had kind of a weird start where the race officials held them to a walk even after they crossed the timing mat, which threw off his splits a bit, but he still finished in 51:30 (9:13/mi)…and missed a medal by 18 seconds!! And was less than 3 minutes behind first place!! He’s still smarting from what could have been…and I’m all like, man, does he have a great coach or what?!?! 😉

On the way home, I kept having flashbacks to the summer of 2013 — before ALS, when I could still dream big. The truth is, I’ve worked so hard to accept what the doctors and literature all say is my inevitable decline that I didn’t realize how strong I still am. I definitely still have symptoms, but I have built muscle this spring. While I was on the diagnostic roller coaster, I listened to the doctors and stopped exercising and where did it get me? I lost all the muscle I’d built from training for the 70.3. Who knows how long it’ll last, but does it matter?

I’m not Jon Blais, there’s no Ironman in my future. But I still PRed that half marathon on Sunday by 11 minutes. Triking to running is not a perfect comparison, but the point is that I can still do it. Now. And I have a whole season ahead of me…let the race planning begin!

I want to say thank you to Ashley and Doug for this weekend, but not just for this weekend. You reappeared in our lives and have become an indispensable part of them. We are grateful for your friendship and look forward to future “trunning” adventures!

Inspiring to read. Feeling grateful to be a part of Team Drea and read this regularly!

Grateful to have you as part of the team and hoping we're on track to meet up soon!!

Aw, I love how that quote fits so well. Thank you Andrea for reminding us to reach high and find out what lies within us. I'm so glad you had such a great race! Looking forward to the next one.

Andrea…your blog always gives me pause…thank you for coming into our lives…
Love,
Mary Ann and Bob,
Jon's mom and dad

You are one strong woman – both inside and out! A true inspiration. So glad it was a success! Polly

Great quote! May you continue to find the strength within to enjoy each day to the fullest. You are an inspiration to myself and many others. Continuing to think of you and Dave as I follow your blog!