Y’all.  I am so incredibly humbled and honored to introduce the amazingly awesome people who have signed up for the Team Drea Challenge.  I really had no idea what to expect, but 40 friends, family, former co-workers, friends of friends, and perfect strangers have committed to do some combination of swim, bike, run, walk, and ninja obstacle race to fundraise and raise awareness for ALS this year.

As I hoped, people are doing a complete range of things — in at least 19 states, DC, and the UK.  That adds up to more than 1,420 total race miles.  If all goes according to plan, we will raise at least another $10,000 to support the Blazeman Foundation and research to end ALS once and for all.

What I didn’t expect was how creative and extreme people were going to get.  Read on to see what I mean:

Ashley & Doug are running one race per month, taking turns pushing their kids in a double stroller.  Ashley rowed with DP and me in college, but it wasn’t until we began spending more time together last year (we’re practically neighbors) that we learned what sweet, generous, and truly special friends they are. They are matching donations up to $2,500 on CrowdRise.  And oh yeah, for their inaugural January race, Ashley WON the 5k!!  Look for her guest post TOMORROW…

Shaw, another friend from college, is going big with a 70.3 in Knoxville followed by whatever-the-heck an 8-stage swim/bike/run event is (an octathalon??).

Molly, who has always pushed me to work harder and smarter since 4am paper writing in grad school, is taking on her first FULL Ironman in Louisville.  In addition to being a rockstar marathoner, she has a catalogue memory of ’90s teen dramas that puts us all to shame.  We hope to be there for the finish line.

Jess, another friend from grad school, will be running her first half marathon in Baltimore.  But first she’s going to take some time to become a sweet momma to a sweet baby 🙂

Elizabeth (not that I ever call her that) is my 3-year college roommate and bridesmaid who has been cracking me up with her weekly #tbt memories from our silly college shenanigans.  She’s now traded her cheerleading skirt smaller-than-my-washcloth-kid-you-not-we-measured-it for trail running shoes for her first race ever, the Lowcountry Trail Half Marathon.

Carissa is also running her first half marathon ever.  I know Carissa from when she was an all-star intern for DC.  Now she’s launched her own career in sustainability and will go far, I know.

Julie & Luke, now-married friends from grad school, are running from Pilot Mountain to Hanging Rock State Park.  Because nothing says love like running a 50k together. Lauran, a good friend from college, is running 179 race miles across 15 events this year from her home base in Edinburgh.  Highlight races include le Marathon du Medoc in Bordeaux, France (avec wine!), Loch Ness Marathon, the Snowdonia Marathon, and Colour Me Rad 5k.  Follow her hilarious race reports on her blog.

Kindiya is Lauran’s freshman year roommate and a dear friend of mine.  She says she’s running something but had a baby less than a month ago (a marathon of a different sort).

Kelly and David’s coach, Carrie McCoy, is a major Blazeman Foundation supporter.  I am excited to get to know them as they gear up for Steelhead 70.3 in southwest MI.

Beth, who is coached by the amazing Fillnow twins, is doing her first 70.3 in Augusta in honor of a close friend who was diagnosed with colon and liver cancer.

Allison, a friend from college, is waiting for the Princeton 70.3 to open up.  We plan to reconnect now that we’re both in MD.

Liana is just getting back into triathlon after a kid-raising hiatus and is planning for Deep Creek.  It’s hard to put into words what Liana is to me — as my immensely talented acupuncturist, she’s the only medical person I see every week because she’s the only one I’ve found with the power to make me feel better.  And she basically doubles as my therapist.

Vivian, the first person to hire me as a lowly planning intern, is planning for another olympic distance tri this year…assuming of course, she decides to come back from Alaska where she’s running sled dogs (no joke).  We have dogs and snow here too, Viv! 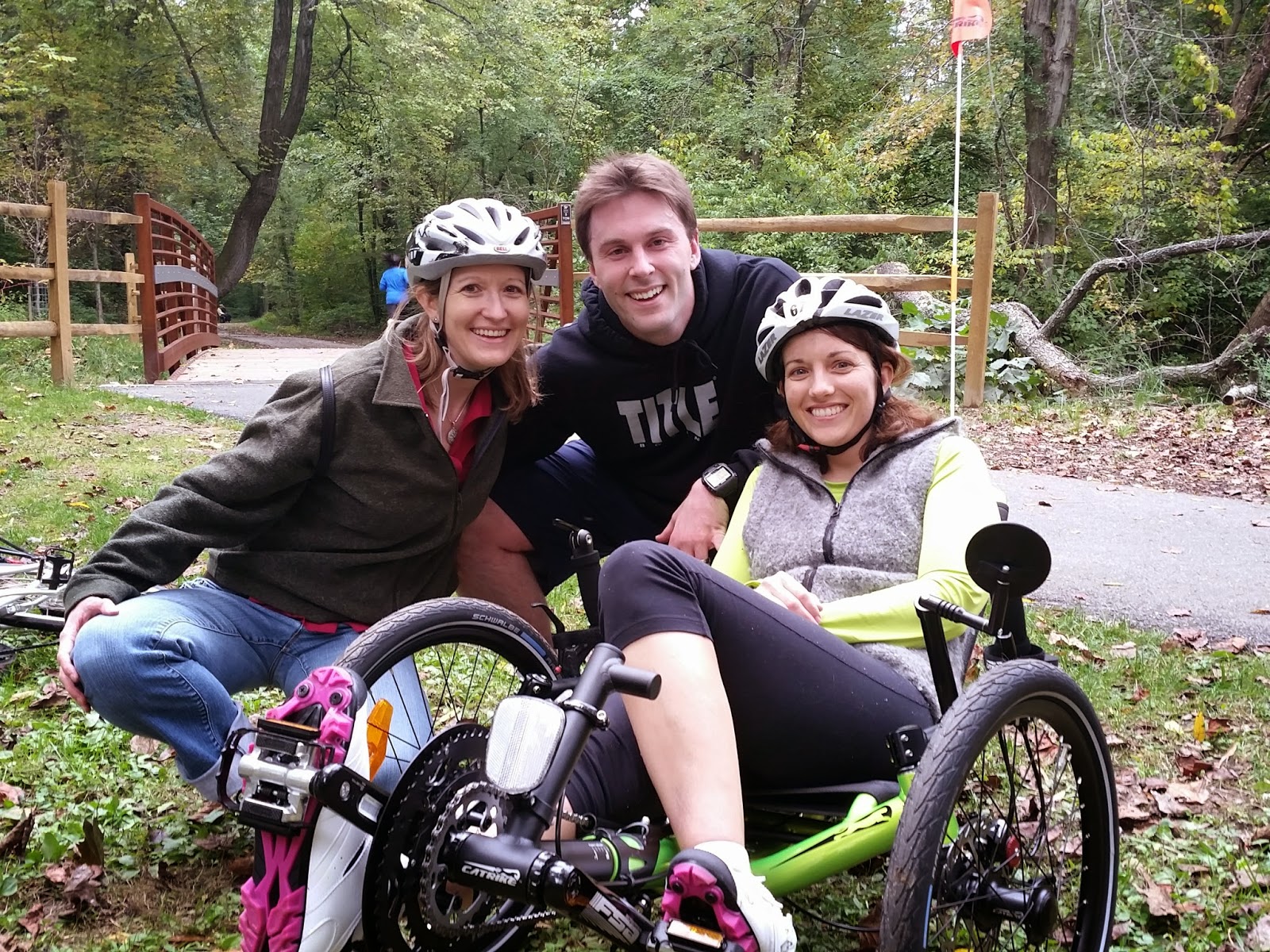 Meredith, the second person to hire me as a lowly intern, will be taking on her first triathlon ever with the Tune Up Tri in Manassas, VA.  Being on opposite sides of the Beltway kind of stinks, but we’re committed to hanging out and bike riding more.

Heather is the new friend I met through Ramblin’ Rose Chapel Hill and the SBM Facebook group.  She is doing her first 70.3 in Raleigh.  What I love about Heather is how much she reflects on the spirit of the challenge in her blog — sure, training’s a chore sometimes, but she knows what a gift it is to get to do triathlon.

Susanna, a friend from high school and one of my relay partners at the 2013 Raleigh marathon, is going for a PR at the DC Rock ‘n Roll Half Marathon.  She says it’s more fun than trying to date in DC 🙂

Will, a friend and former colleague, is also running the DC Rock ‘n Roll Half, his first organized race ever.  Which is kind of hard to believe because, according to Nike+, he’s already run all over NYC.  I have no doubt that he’s going to love the RnR but watch out for the ridiculous hill up to Calvert  St — this ain’t Central Park! 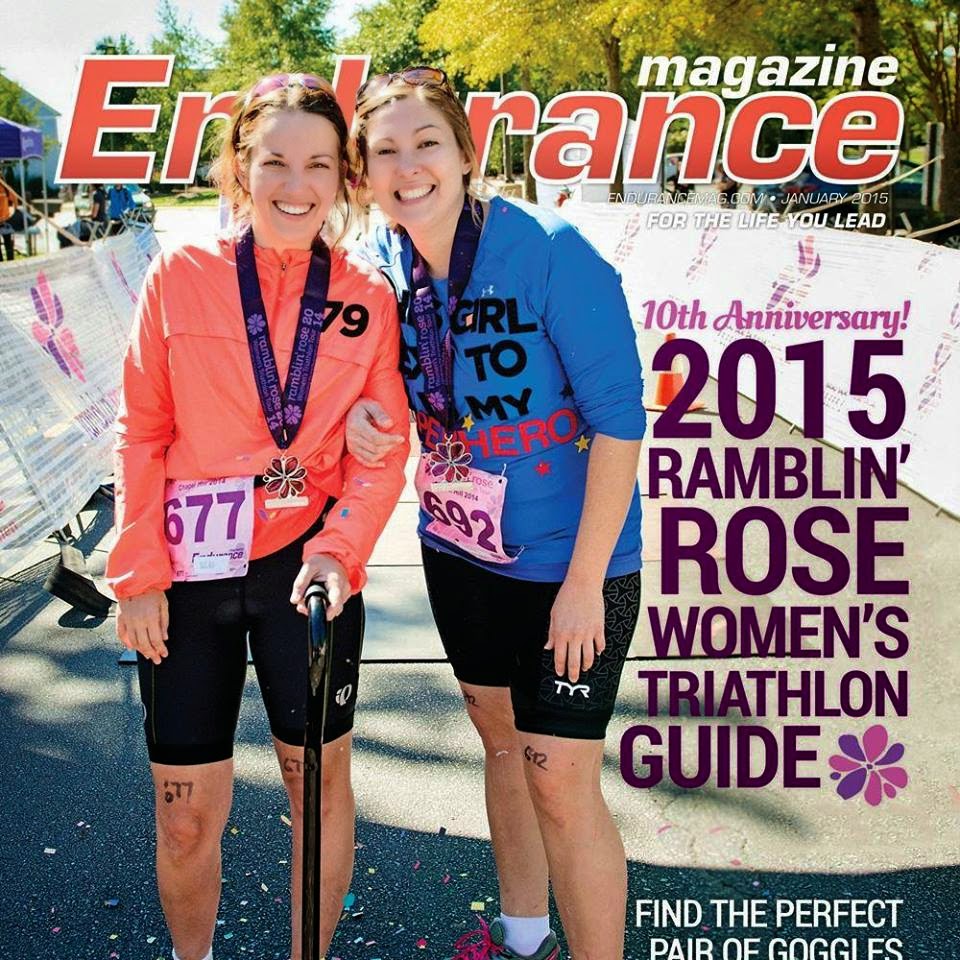 Julie, well, y’all know Julie —–>
is going to PR the RRR (Ramblin’ Rose Raleigh) tri since she won’t be dragging my tortoise butt across the finish line.  DP and I are excited to be on the sidelines supporting OUR superhero!

And now for the Julie entourage…

Isla & Tony, her parents, are doing the Triangle Walk to Defeat ALS.   I’ve heard that Isla’s real challenge is to get Tony to the walk, but don’t worry Tony, I’ll give you a pass if you make me bacon 🙂

Shannon, Julie’s friend and former co-worker, is running her first half marathon at the Raleigh Rock ‘n Roll.  Watch out girl, they’re addictive…

Linda, Julie’s friend (and mine too!), is also running the Raleigh Rock ‘n Roll Half Marathon though, given where she lives, she might be able to just roll out of bed and onto the course.

Amber, another one of Julie’s friends, is planning to work in race training on top of mommy-ing and teaching baby music lessons.

In addition to being an awesome friend, Carrie is the Team Drea ninja.  She will become said ninja by running a 5k obstacle race.  Carrie will tell you she’s not a runner…except that she’s been running on a dreadmill with audiobooks.  Don’t let her fool you.  She’s a ninja after all.

Annie, my ATL confidante and perpetual Fellini’s partner, is donating 10% of her craft sales this year.  GET AN ETSY STORE DAMMIT!  How’s that for supportive? 😉

Cara, my high school friend and wedding planner extraordinaire, is doing her first 5k ever.

David started out in the New Triathlete Program with me in DCTri, except now he’s leading it.  David always taking on crazy challenges…which is why he decided to run a 50-MILE ultramarathon.  See?  Crazy.

Brie & Thomas are running a 10k in their new hometown of Portland, ME…aaaaafter the snow melts.  Brie and I have been friends since PREschool but reconnected recently.  That will be the third race she’s run for Team Drea.

Marianne, my best friend Cathy’s mom, is doing enough events for the whole family!  She is joining us for the ClubWorx Cycle for ALS, then a 5k at UNCC, and the Charlotte Walk to Defeat ALS.  And that’s just through April…

Ana, a friend from college, is running the Nutmeg marathon in May, which frankly seems like the wrong season.  Who knows why they do what they do up in CT…

Daniella is a former co-worker who has already done a full Ironman (the inaugural Lake Tahoe, no less).  Being a PhD student, she doesn’t have time for such shenanigans these days — so instead she’s doing a 14-mile eco-extreme trail race.  Last year, she pulled off a masterful Blazeman roll in solidarity:

Tim, DP’s friend from college, is going to do Lake Stevens 70.3.  I don’t know whether Tim has ever done a triathlon, but he’s an Army doc, new dad, and has an unbelievably supportive wife.  And he can fix everything with duct tape.  So a 70.3 will be no prob.

Mom & Dad…have known me since forever 🙂  Mom’s still hemming and hawing about the different parts of a triathlon (not bad for someone turning 70 this year!) and Dad’s in charge of handmaking 40 presents for the Team Drea Challenge.

DP, my husband and angel in this world, is doing……..Challenge Maine 70.3 in Old Orchard Beach! Fortunately, he has this GREAT coach who is planning lead-up races everywhere she wants to go this year (which is why OOB may become Cozumel, heyyyy).

Me, haven’t decided 😉  Yeah, yeah, deadline-schmedline.  My blog, I make the rules 🙂  Now that I know where all you are going to be, I’ll work out our race schedule next.

This is already way too long so I won’t go on about how proud I am of this group.  But I am.  My hope for you is that you enjoy the challenge and discover something about yourselves along the way.

Still want to join the Team Drea Challenge?  Sign up here by February 15th.  I mean it this time 🙂

Andrea,
What a tribute to you! So many friends supporting you through this challenge…we are blessed to know you! Love, Mary Ann and Bob, Jon's mom and dad

Andrea… I ran most of the course on Saturday… That hill is a killer and hits at a bad mile. Yikes! PS: Would you connect all of us running the RnR DC 1/2?