October 22, 2014
Uncategorized
5 Comments
A couple of people said they had trouble finding the link to donate so here it is:
Donate to the Blazeman Foundation as part of Team Drea
We are over $10,000!!  Thank you everyone!!!!
—
Backstory
Team Drea has picked up some new followers recently so here’s a recap of my story:

179 has been my lucky number for almost 20 years, dating back to the good ol’ days of middle school band.  It’s like a friendly little omen I see everywhere…

I eventually set the french horn aside and for the past few years, running and triathlon has consumed my hobby time.  I did five triathlons in 2013, culminating in the inaugural Carolina Half in September, a 70.3-mile race in and around Davidson College, my alma mater.
After the race, my hamstrings stayed wound tight and I was tripping over my toes.  That led to 11 months of tests, doctors, and medical confusion until I finally got a diagnosis of ALS (Lou Gehrig’s disease) in August 2014.
ALS is a fast-moving degenerative disease where the brain loses the ability to communicate with the muscles.  Since the muscles aren’t being stimulated, they atrophy.  90% of patients with ALS die within 2-5 years.  In that time, their minds stay fully intact, forcing them to watch as they lose the ability to walk, talk, eat, swallow, and eventually, breathe.
So I was shocked when I learned of Jon Blais’s story.  Jon “Blazeman” Blais became an Ironman in 2005, five months after being diagnosed with ALS at the age of 33 (my age).  NBC covered his unbelievable journey to Kona.  His bib number?  179.
Jon created the Blazeman Foundation before he died two years later to declare war on ALS – to fund the research to defeat the disease once and for all – even though he knew it probably wouldn’t save him.  His parents now run the charity, not taking a salary so that 99% of the donations go to finding a cure.
Facing my own ALS diagnosis, I was incredibly inspired by Jon and thought I might be able to manage a super sprint triathlon before the season ended and use it as a fundraiser for the Blazeman Foundation.  My friends and family donated $9,000 in two weeks.  I was (am still) astounded.
Okay, you’re up to date…
Race Report
Ramblin’ Rose is a women-only super sprint series in North Carolina.  Distances: 250-yard swim, 9-mile bike, 2-mile run.
My oldest friend in the world, Julie, raced with me. 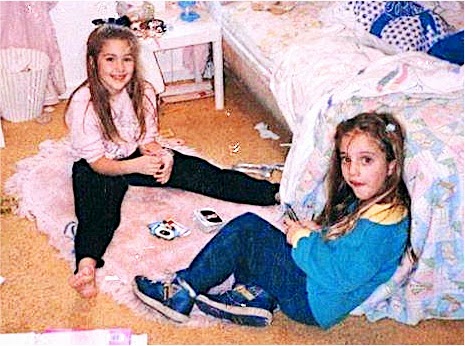 Julie and I have been friends since age 2.  This is the kind of friend Julie is: She flew in from England to be in my wedding, she dropped everything to stay with me for a week this summer while DP was out of town (and left me little notes around the house that I’m STILL finding!).  She took swim lessons and bought a bike to do this race with me.  It was her first triathlon and I was excited for us to do it together.  But I had no idea how much I would need her… 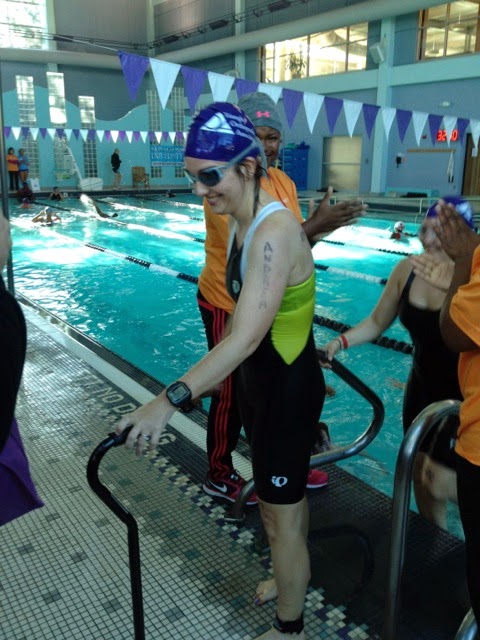 Race morning was chilly – 43 degrees at the start.  I was nervous because I haven’t done much swimming recently because of a fall in July where I hurt my shoulder.  The nerves and the cold caused my muscles to clamp down, but I couldn’t do anything like running or jumping jacks to warm up.  So I just stood in the patches of sunlight and was grateful for the warmth.  I was relieved to get into the (warm!) UNC Wellness Center.  While waiting for our turn in the pool, I watched women of all ages, races, shapes, sizes, and swim abilities just doing their best with volunteers, race staff, and other competitors cheering them on.  It was really nice.  I relaxed.
The swim was fine (I wasn’t even last), but if I thought I was cold before, getting out and walking through transition sopping wet was a whole new level.  I clutched on to Julie and we wrestled my trike out, thanks to some volunteers (and my dad).  Swim: 12:42, T1: 13:07 (oops)

I’ve said it before, but I love my Catrike Pocket recumbent trike so much.  The sun was out, the sky was perfectly blue, and for once, I couldn’t fall.  So I enjoyed every inch of those 9 miles – climbing the hills at an impressive 3.9 mph, screaming down them at 15 mph (which feels faster when you’re so close to the ground).  I thought about Jon Blais, all the people supporting me, and what a great feeling it was to use my muscles.  So much of what I love to do has been taken away from me this past year – to get a glimpse of it back even for a day was just plain awesome.

Some Luna Chix riders joined us for the last few miles.  They were so nice and chatty with Julie.  I didn’t say much because I was focusing on pushing myself and controlling my muscles. Bike: 1:17:23, T2: 7:03
I didn’t realize how far we were behind everyone when we started the “run.”  I had two trekking poles but my legs weren’t cooperating.  My toes curled, my feet dragged, and my knees locked out with every step.  Julie held onto my arm the whole time.  I really never thought about giving up, I was just frustrated by not being able to walk normally no matter how hard I concentrated.
The route was part greenway, part neighborhood sidewalk so several of Julie’s friends walked with us.  Some teenagers who had finished the race joined us, along with a couple of race volunteers (I later found out they thought we were lost).  So we had quite a little group approaching the finish.

Never did it cross my mind that anyone would be waiting at the finish line for us besides our friends and family.  Julie and I were 40-some minutes behind the next-to-last competitor.  But the announcer had told everyone that they didn’t want to miss the last finishers and so somewhere around 100 people stayed.  Apparently, they had a dance party, which should be a mainstay of triathlons forever more 🙂

Walking through the finish chute with everyone clapping and cheering and crying, honestly, I couldn’t look around.  I would have lost it.  I mean, just watch the video…


People say I inspired them, but it is nothing compared to what reverberated through me from all sides.  It was the very best of humanity.  What is it like to have that force of compassion directed at you?  It defies words.  Jon Blais knew.  And now I know too.  All I can say is thank you.  It is a memory and an emotion that my friends, family, and I will never, ever forget.

Not that it matters, but Run: 1:32:45 Total: 3:22:59.  (Lawdy, did I mention we took in NO nutrition?  Who needs nutrition for a sprint?  If you take 3 1/2 hours to finish, you do!)
Thank yous
This is going to be longer than any awards show speech.  Team Drea is BIG, y’all!  I want to express my deepest thanks and heartfelt appreciation to:

Our wonderful friends and family out there: DP, Dr. P (who drove down from Philly as a surprise), my parents, Julie’s parents Isla & Tony and sister Jennifer, Will, Arden, Linda, Kim, Genevieve, Shravan, Jaimi, Stuart, Scott, and Owen.  The Swim Bike Mom Tri-Fecta ladies: Robin, Aimee, and Lindsay. And the anonymous people who picked up the check for our table after lunch!

The Endurance Team: All of the staff and volunteers, especially the race director, Amy, who did a great job running the race and still managed to help me so, so many times throughout the day.   Tamara Lackey, Sarah, and the rest of Tamara’s team who took such beautiful photos that we will treasure always.
My friends and family who donated: I asked for support and you came through beyond my wildest expectations.  I decided to do this race for me, but I finished it for you.  I am so blessed to have each and every one of you in my life.  Real thank you notes coming your way…
Everyone racing in my honor: Gregg, Greta, my cousin Ted, so many Tri-Fecta ladies, Carrie McCoy (at KONA!!), and my hysterically-irreverent DCTri NTP mentor Tuan who will be crossing the finish line at IM Barcelona 2015 waving a 179 bib. 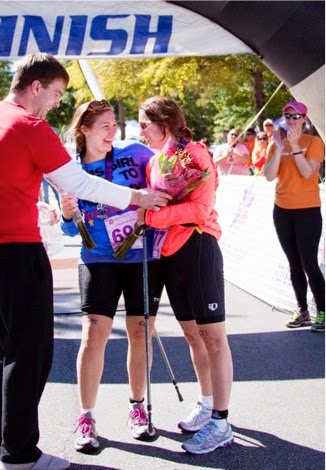 My hero: My amazingly beautiful friend, Julie.  In all the photos I’ve seen, there is not one that she isn’t in the frame too — holding me up, helping me, smiling, waving.  Julie is MY inspiration to be a better person and better friend.

I hope everyone is lucky enough to find their Julie in life, but mine is truly one of a kind.  The fact we found each other in preschool?  Everything happens for a reason.  Everything. 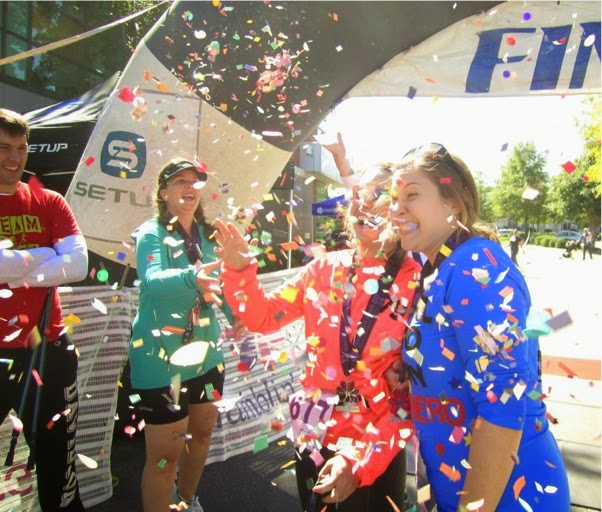 So fitting that her mom brought the bags of confetti we made out of construction paper in middle school to throw during New Year’s Eve sleepovers!

Where to go from here?

Well, we’re doing the Walk to Defeat ALS in DC on November 1st (join us!).  DP and I will be turkey trotting & turkey triking a 5k on Thanksgiving.  I’m also hoping to help my wonderful acupuncturist, Liana, put on an adaptive yoga workshop for people with disabilities.  I’d like to do something with DCTri, since many of my friends there have been so supportive – maybe use one day of the off-season cycle program as a Blazeman Cycle for ALS event?? 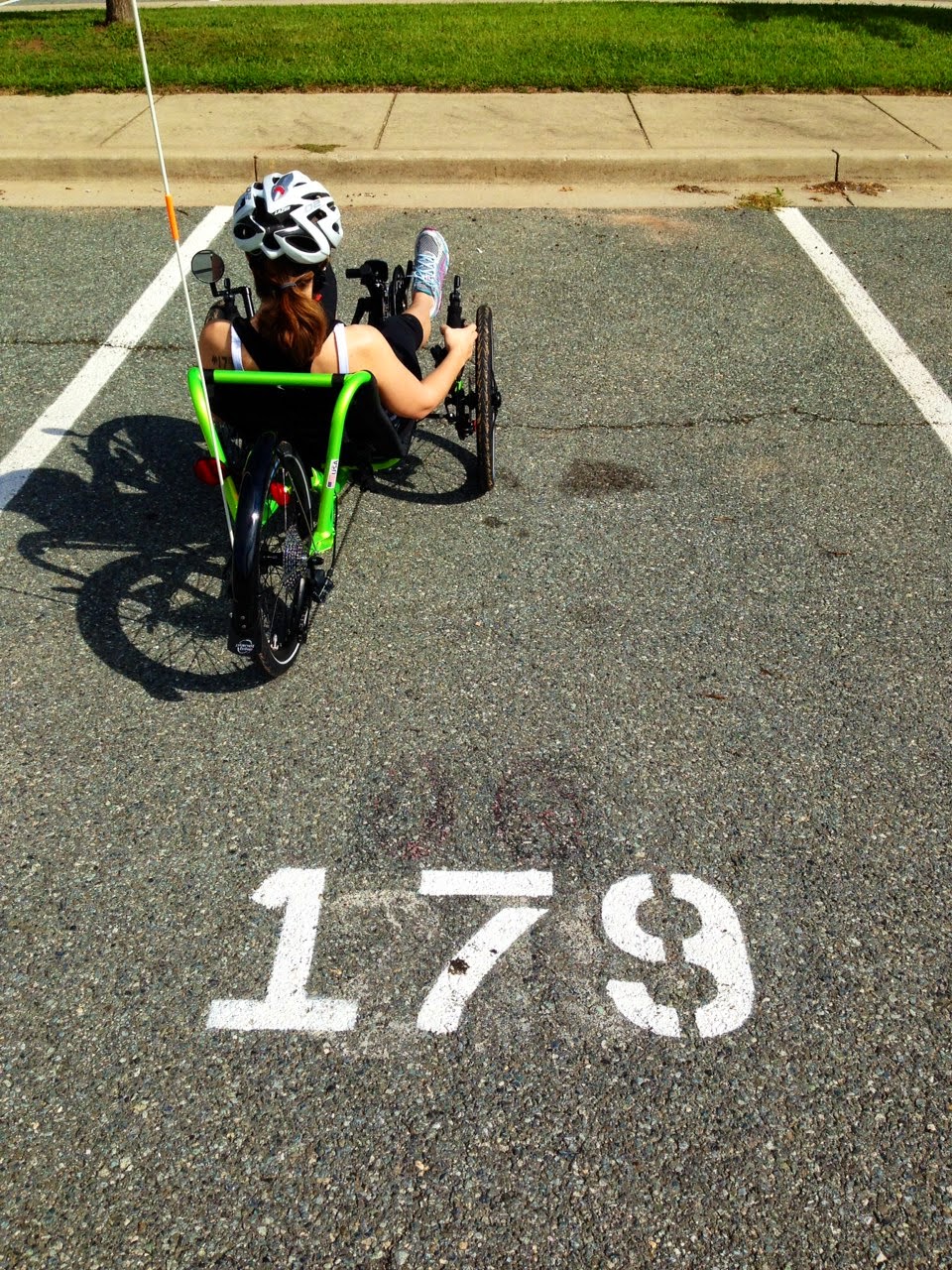 And I’d like to think I could do another triathlon – maybe the HITS open category tri (even shorter than Ramblin’ Rose!) in Naples, FL in January or one of LifeTimeFitness’s Indoor Tris.  Not to try to recreate what happened at this race (it can’t be done) but just have something to train for.  And because I love triathlon so much.  But if not, I will happily ride my trike for as long as I possibly can.

My PT gym always has a new quote on its whiteboard. Here was this week’s:

“When we are no longer able to change a situation, we are challenged to change ourselves.” ~Victor Frankl

I have tended to live life by powering through — head down, just keep pushing.  Yeah, that probably did help in the tri, but really, since the diagnosis I’ve let my heart lead the journey.  The result has been empowering, humbling, and led to the most extraordinary opportunities I never even saw coming.

ALS connected us back in August…#179, well who would have thought we all had that connection!
Andrea, you continue to inspire us!

Oh, there are so many wonderful pictures on this page; the one of you and Julie playing Uno is so sweet!! You are both incredibly determined–and both incredibly fun, according to Andrew!;)

I just got around to reading this and I am so amazed by your perseverance. Watching the video seriously made me nearly cry! What an amazing moment.

[…] This had a couple of advantages: 1) I wouldn’t be keeping everyone for an extra hour like RR Chapel Hill, 2) it would be safer/easier for me to swim in the same lane along the side instead of […]