The race honoring Matt Bellina was part of our trip to DC for the Fourth of July long weekend.

The race was on Saturday but on Friday, Hardywood Park Craft Brewery in Richmond, VA held their second annual Ales for ALS event featuring Andrea’s Ale — so of course we had to attend…besides, all the best races begin with beer, right?
Ales for ALS is a very cool fundraiser: Loftus Ranches & Hopunion grow & donate hops to breweries that then develop their own craft beer and donate $1/pint to ALS.net for research. For example, here’s Hardywood’s description of Andrea’s Ale: “Fresh mango brings a refreshing tropical character to this session pale ale.” Which sounds like a perfect description of me — especially when you add DP’s favorite part that it’s only 3.7% alcohol…befitting for the lightweight I am 😉

We’ve come to really love these fundraisers — it gives us a chance to hang out with friends living in the area and we always meet new people living with ALS or loved ones touched by the disease. Thank you Elise, Shannon, Katie, Jo, Lo, Michelle, Anne, and Brea for making this event special and a HUGE thank you to Eric, Patrick, and the Hardywood crew for raising $3,000 for ALS research!!!

Race Day
The 7am start time meant we were up at 5am, since we were a half an hour away and still had to do packet pickup. The 17.76k (11mi) race was held at Shirley Plantation, a 700-acre farm sprawling along the north bank of the James River boasting to be America’s oldest family-owned business (est. 1613). Entering the property, we passed fields of corn and soybeans, then rows of grapevines and a winery.

It was all pastoral and lovely, steeped in history, but I was fixated on all the ROCKS. Everywhere. The race director warned me that most of the race was on hard-packed gravel and I’d seen a caution that runners should be on the lookout for rocks. Yep, rocks all over. No PRs today. At least it was flat…

I hadn’t been given any special instructions on where to start so I seeded myself in Corral B for runners slower than 8:30. I hugged the right side of the gravel road to stay out of the way, but quickly discovered that the soft sand on the shoulder was far more problematic than the rocks. The trike wheels sank in and my quads started working hard. Too hard to keep up for 11 miles. Umm, can I do this? I felt the momentum of the race passing me and pretty soon I was back amongst the race walkers.

Just when I was really starting to worry, we reached pavement. Whew. I switched to the left side of the road and began passing people. If I was going to need a bunch of extra time to deal with rocks, gravel, and sand, I figured I’d better gain some ground (ugh, pun) while I could. Fortunately, the race pack had stretched out by then and it was easy to skirt around runners.

I pedaled up next to a small contingent of military servicemen carrying a large American flag and a small sound system playing marching cadences. I gave them a huge smile and a thumbs up, then wondered sadly for the millionth time why ALS isn’t more of a priority for military spending, considering veterans are twice as likely to be diagnosed as the general population.

Jay Smith wrote a shocking column in the HuffPo last November about everything he’s learned from Matt Bellina, my honoree for this race. You should read the whole article to understand the outrageous way we are caring for the veterans who have protected our freedom, but here is the most jaw-dropping fact Matt told Senator Lisa Murkowski (R-AK, a great ALS advocate):
“I honestly think nobody has looked at the costs. The Muscular Dystrophy Association (MDA) estimates the total for all federal programs for ALS care is costing taxpayers $350-$450 million per year. You compare that to the $7.5 million spent on annual research and it really makes you wonder who is calling the shots and why they are still employed.”
That’s right: at $450M, we as taxpayers are spending ONE percent of the money we spend caring for veterans with ALS on the research needed to end the disease forever.
I said a silent prayer that these servicemen with the flag will never know the ironic tragedy that is ALS, and pulled ahead. The course turned left onto the Virginia Capital Trail – a new (completed in 2015), 52-mile trail connecting Richmond and Jamestown. I’d never even heard of it but wow, it’s beautiful.
I spent the next few miles with the same group of runners, coasting past them on the downhills only for them to catch me on the uphills as I slowed to practically a standstill, dialing back to my granny gear and hoping I had enough strength to reach the top without asking them for a push. We kept saying to each other things like, “you got this!” “you’re awesome!” and “keep at it!” I love race angels – people who just come into your life for only a few critical minutes when you bond over encouragement you both desperately need, and then you part ways forever, never even knowing their names. But when you remember and talk about the race, they always reappear.
That’s another reason racing means so much to me. People who haven’t been there don’t get it. Like the guy in the recumbent trike forum who said I should “just ride my trike around the block” when I asked for suggestions of trike-friendly races. “Why would you even want to do that? You’re not a runner anymore.”
Eff that guy. He’ll never understand. But the people who manage these races should understand. That’s why I’m not giving up on my quest to make it easier for disabled athletes to participate. I haven’t said much after my rant on FB, but I haven’t given up on it. It’s not the life and death kind of advocacy that Matt Bellina is engaged with in Right to Try, but it’s about leaving the landscape better for future generations…with a healthy dose of selfishness about improving and lengthening the time we have left. Hey, it’s the only life we get and we don’t have time to waste.
The paved part of the race was an out and back, but the pavement ran out for good in Mile 7. Along with the shade. While the morning started out cool and foggy, that had long since burned off and July was in full force. I got a quick kiss from DP around 7.5 when the course reached the point closest to the start/finish area before shooting out for a long loop along a gravel farm road for the remaining 3+ miles. He told me later that a bunch of people just dropped out there and started walking towards the burgers and hot dogs because it was just that hot. 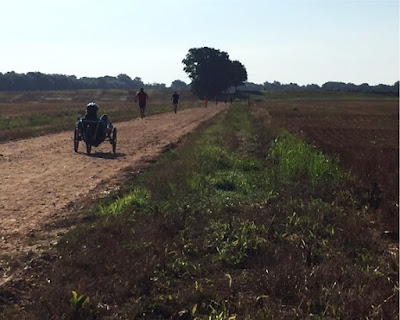 A short time later, I had some trouble climbing a little hill. It wasn’t very steep, but I didn’t have any momentum on the gravel. The tires skidded and the back fishtailed as I fought my way up this dinky hill as sweaty runners chugged past. All in all, it seemed like a pretty fair race for running v. trike.

As I slugged my way through those last few miles, dodging the ever-present rocks, I turned inward to say an ardent prayer for Matt Bellina and his family. I prayed for Matt to keep his strength and determination as alive as the day he woke up and decided that “this thing wouldn’t beat me.” That conviction comes from his steadfast promise to be there for his sons, JP and Kip, as long as he can. He does what he does for them, but since that means taking on the behemoth of Congress and the FDA, then that’s what he’s going to do. As he told me, “I have learned that I am much more than my arms and legs, or even the air in my lungs.”
That’s what we’re counting on. Thank you for your service to our country, Matt – in the past and the present. I hope that the government willing to send you to war is honorable enough to allow you the option to try to save your own life.
Time: 1:59:15 (avg. 10:49/mi)
Previous Post
Race for Matt Bellina: Part 1
Next Post
How are you doing?

[…] to walk with the walker, however slow). I was happy that I could power through the gravel at the 17.76k. My handcycling is on hold as I wait for new, smaller hand pedals so I can shift more easily. […]